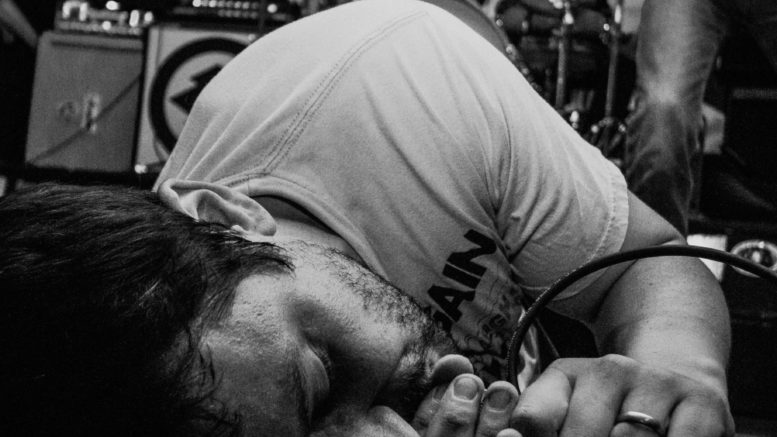 Back to Charles. The records Charles Albright has given me in advance of our interview are each annotated with Post-its written in Sharpie. The bag is huge—it include, among others, a 2005’s LP by The Knightmares, a recent Globs record annotated “Released just as the Pandemic hit!” and the just-released split LP with Cross Class and Albright’s band RAD—an album whose proceeds will go to the Movement for Black Lives.

The huge bag of records contains a very small sampling of Charles Albright’s musical projects from the last 15-ish years. It’s possible even his own efforts to document bands he’s been in (there’s a spreadsheet online) miss a few. In our interview, we agree three bands at a time and a record a year sounds about right.

Normal music profiles highlight a recent release, but in those stack of annotated records, there’s one that’s warranted three Post-its and the one that intrigued me most: 2018’s Everything Went Charles Albright. One note says: “My proudest moment came out when Liza was born…in my mind, [this record is] still new.”

Liza—his daughter with Christine Shelley, his frequent musical collaborator and his wife—was born before the album’s release, and just a few weeks after President Donald Trump’s inauguration. These surreal almost-four years of his daughter’s life have seen both the unavoidable reduced artistic pace parenthood brings and a renewed commitment to a specifically-Sacramento DIY ethic that was already cranked to eleven.

“The pace in which one does things as a young person, teen years through early 20s…you can have a really vital band, that’s a major part of your life… but the band might only exist for 18 months or two years,” Albright says. “But things happen really quick, [and for] someone like myself who’s 40 and who works and has a kid… and, you know, I’ll be in a band for four years, and it seems like it’s just started.”

There’s no reference to the Trump presidency in the album. It’s easy—and fun—enough to listen to it without context. But once you’re hipped to the album’s premise, once you’re in on the joke, it’s hard to divorce the record from the era that birthed it.

“I really got bummed out when Trump got popular because he’s stealing my idea,” Albright says, laughing. “He’s a vacuous celebrity that has no value to him at all, and he’s the fucking president of the most powerful country in the history of the world.”

It’s an album that acknowledges the potential for ego gone overboard that can permeate some performance, but Everything Went Charles Albright goes beyond self-indulgent scenester in-joke. It’s genuinely good, if hard to pin down, genre-wise. In places it’s a driving punk rock record; in others—or in the middle of some—it’s indistinct dialog, bits of saxophone thrown in here and there. It’s chaotic and occasionally tough without veering into dude-bro territory.

Lyrically, it’s smartly silly: If pre-pandemic you were the type to stand in front of the stage chanting along to tough-dude refrains, you may find a peculiarly goofy COVID lockdown relief in screaming along to the record as Albright yells: “Dane Cook, Nickelback, The Olive Garden, WHAT?”

Everything Went Charles Albright took a jab at hubris as we all navigated through the mire—the swamp, if you will— of 2018. So what takes it beyond snotty punk rock joke? Why revisit a record from a musician who’s put out two records since this one, with more in the pipeline?

“[Making music] is in large part…engaging in that cultural part of the Do It Yourself work ethic, seeking out what’s right and wrong…, and trying to do what’s right. That’s still an important cultural aspect of the music,” Albright says. “And I think that’s why punk and DIY music and indie music is so appealing. It gives you that little bit of courage to like, do something and to and to put your voice out there. And.. I think for different and as I think that that’s like more impactful for different groups of people at a specific moment.”

And for Albright, as a somewhat new parent, that specific moment—the final days ofat window of time we’re not quite finished with, the Trump administration—is captured in the tongue-in-cheek Everything Went Charles Albright.

It still feels new because we are still fighting four years of political self-indulgence.

“Apathy and cynicism [can] very much [present as] self pity or a self indulgence…And when you have a kid…you have to play your part in trying to make the world better with other people who think the same way as you, right?” he explains.

Be the first to comment on "Making music in Trump era"