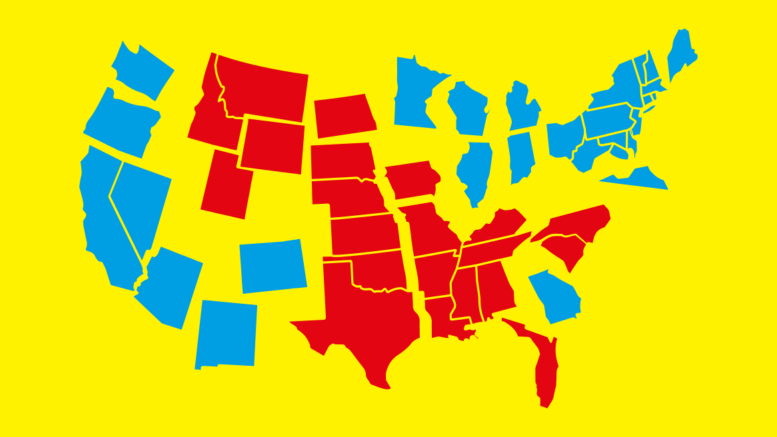 The discombobulated electoral map formerly known as the United States of America. (Illustration by Serene Lusano)

The 2020 election revealed just how broken we are. Will we reassemble the pieces?

If you even want there to be a United States of America 20 years from now, well, Plan A would be to build a time machine and deliver pamphlets about the dangers of toxic masculinity throughout the space time continuum. Barring that, here are some other ideas.

Created by rich white guys in wigs who wanted to appease slave owners and thought the common citizenry too dumb to elect a president, the Electoral College doesn’t exactly have a cool origin story. While it’s been a problem since inception because it can dilute or even dismiss the will of the people, we keep tinkering with it like a busted lawnmower instead of doing what we should: Sell it on eBay to Iran.

Only once did we come close to scrapping the archaic and byzantine process in which we divvy electoral votes based on the number of congressional members each state has and then award those votes winner-take-all fashion—except for two states and except for if Congress just decides it doesn’t want to and oh God what if there’s a tie?!

A bipartisan effort to replace the Electoral College with unfiltered democracy narrowly failed in 1970 because of a few segregationist senators who liked the fact that racist third party candidate George Wallace nearly upended the ’68 election. Congress hasn’t suggested letting Americans decide presidential races since. Because Republicans won the last two times the Electoral College overruled the popular vote, the odds that it will anytime soon are as thin as Mitch McConnell’s lips.

In absence of federal leadership to dissolve the Electoral College, a growing coalition of states and the District of Columbia is working to render it completely irrelevant.

This shouldn’t be a partisan issue; the Electoral College offends every political persuasion. Consider that Joe Biden won 65% of the vote in California, yet received 100% of the state’s 55 electoral votes. That discounts about 4.2 million people who voted for someone else.

Not every state has a Stacey Abrams, the visionary voting rights defender who responded to the disenfranchisement of 53,000 Georgia voters in her 2018 gubernatorial race by signing up 800,000 new voters in time to potentially put the Peach State in Biden’s hands.

And despite what a smattering of authoritarian bootlickers shouted outside of election centers, voting is a privilege afforded to every eligible American. So let’s make it uniformly accessible and fair, and make damn sure that it counts.

The federal government should restore the intent of the Voting Rights Act of 1964, automatically register every eligible voter, restore eligibility to anyone who has completed a prison term, allow 17-year-olds who will turn 18 before a general election to vote in primaries, permit same-day registration and implement a national drop-off and mail-in voting policy that California and other states used to boost turnout to the highest levels on record.

Additionally, allowing states to count absentee and mail-in ballots before Election Day will make it harder—although not impossible—for screwball incumbents and their frothing goons to try to delegitimize the legal election process.

Despite no evidence of widespread voter fraud, governors and legislatures in mostly (but not all) Republican states have made it harder for people to vote. Why? Because the simple fact is, at least right now, there are more Democratic voters than there Republican ones. Instead of trying to win over these voters with policies, an unpopular majority launches wars on math and fairness.

This is why whether you’re eligible to vote, how many hoops you have to jump through to cast that vote, what your ballot looks like, how many races you get to decide, when and if your ballot will be processed and what weight your individual vote will carry depends on where you live.

It’s also why Barack Obama launched All On The Line after leaving office. The national campaign is a response to legislative gerrymandering efforts to suppress or magnify particular voting blocs. And it’s seen minor success in making a case for equitable maps in Colorado, Ohio and Wisconsin—where Republicans claimed 64% of legislative seats in 2018 despite winning only 46% of the popular vote—while courts have tossed out heavily gerrymandered maps in Pennsylvania and Florida.

But with Trump sabotaging the 2020 census and stacking the federal courts—and with Democrats losing some state legislative seats this election—the fight for fair districts will likely get harder.

4) Invest in our critical thinking infrastructure.

Blame YouTube algorithms, online echo chambers, foreign election interference or the singularity, but we the people need to vastly improve our ability to detect bullshit in an age of it. Our inability to do so—to ask basic questions, vet sources, interrogate our own assumptions or dismiss even outright conspiracies—is killing us. Literally.

We have 4.25% of the world’s population but 19% of the world’s coronavirus deaths. That isn’t bad luck. That’s colossal incompetence brought on by a terminal unwillingness to face inconvenient facts.

Too many of us are guilty of starting with the things we prefer to be true and fumbling backward through thickets of strawman arguments and “whataboutist” tangents to justify them. Maybe it’s time for something akin to a Common Sense Corps, made up of patient, non-judgmental, nonpartisan, media literate volunteers who can deploy to any community and instruct us how to navigate a world drowning in spurious content. Either that or a magnetic pulse needs to kill the internet until we learn how to use it properly. Because we ain’t doing that now.

Perhaps more than any item on this list, our ability to think critically through whatever comes next will determine whether our republic continues to stand—and whether it deserves to.

The United States is poised to lose its white majority by the year 2050. This tipping point can’t come soon enough. But until it does, our inability to confront and debunk the anxieties and myths of white Americans will continue tormenting us.

Eddie S. Glaude Jr., chairperson of Princeton University’s Department of African American studies, distilled the real-world consequences of our national dilemma in a stirring appearance on MSNBC last August. Recalling how pundits explained away the Tea Party as an outgrowth of frustrated fiscal conservatism rather than a warning sign of simmering hostility, Glaude said it was unfair to blame the racial violence that happened in Charlottesville, Pittsburgh, El Paso and other cities on the president alone.

“This. Is. Us,” Glaude thundered. “And if we’re going to get past this, we can’t blame it on him. He’s a manifestation of the ugliness that’s in us.”

Trump exploited our racial animus. He didn’t originate it. And when he eventually slithers away, he won’t take our ugliness with him. For all his cruel lies and reckless falsehoods, this unconscionable man did one honest thing. He showed us who we are. Consider it an unfit president’s final gift to an un-great nation.