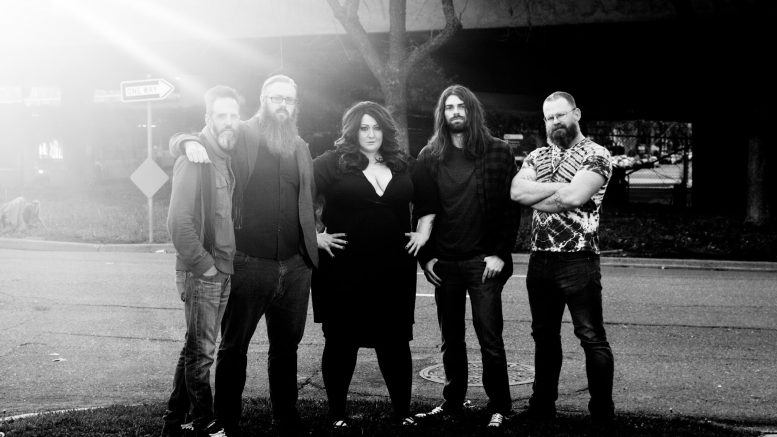 Burly Beverages and Shelterfest founder Gabriel Aiello (far right) will be playing the festival with his band, Drop Dead Red.

“I think that shelter in place is super important, so it kind of then became a mission to encourage that behavior and mentality while bringing people the things that they’re missing the most right now,” says Gabriel Aiello, owner of Sacramento-based Burly Beverages, a line of craft cocktail and soda mixers.

He as already looking for a way to bring his mini music festivals known as the Burly Backyard BBQs online when he heard about yet another pandemic casualty for Sacramento music: Shine Café.

“Shine [was] kind of a special venue for the scene because it was a small, comfortable neighborhood stage where people could try out new material, or less experienced bands play for their friends and neighbors for the first time,” Aiello says. “And [that’s the] moment I got just really scared…It’s great, like, let’s have this backyard barbecue go online, but what’s gonna happen when this is all over, and every venue that we had to play is gone?”

And so the concept of “Burly BBQs, but online,” became ShelterFest, a six-hour online festival of music, poetry and comedy on Saturday, Oct. 10 to benefit Sacramento’s struggling independent music venues, unable to do business until the county’s coronavirus numbers drop even further.

ShelterFest will include bands from past Burly Backyard BBQs—Aiello’s own Drop Dead Red, as well as seven others. The festival will expand the entertainment to include poets, stand-up comedians and DJs, all filmed at five independent venues. Aiello credits Artists of Sacramento and its co-founder Laura Anthony for incorporating other art forms into ShelterFest.

All of the entertainment was pre-recorded, not just to avoid technical glitches, but to ensure safe social distancing. That, and because all venues benefiting from ShelterFest are currently shuttered: Café Colonial, Luna’s Café, Old Ironsides, Press Club and Torch Club.

But the online performances are only part of the story. At ShelterFest2020.com, early birds could order food to enjoy during the entertainment. With the assistance of Trophy Club, bartenders at each benefiting venue will offer signature “mocktails,” complete with tips on how to turn those drinks into “adult” beverages in videos in between performances. Both food and drink have delivery and pick-up options.

A regular Burly Backyard costs $5 to $7 per show—for the hard-core kids in the back, think of it as the Fugazi of barbecues. ShelterFest is a bit pricier at $25 per ticket; but Aiello’s goal is to raise $5,000 per venue, in addition to paying all bands, performers, and food delivery drivers.

It’s an ambitious goal, but many performers have already waived their fees, and Burly and Artists of Sacramento have lined up a number of sponsors.

One of those performers who’s waived his fee is Ngaio Bealum, comedian and SNR’s cannabis columnist. “I’m a comedian. So it’s like me and a microphone,” he said. “But the venues, you know, it’s the bartenders, the waitstaff, the security guards, it’s the promoters, the marketing people. There’s so many people, such an infrastructure, and it’s a drag that everyone’s careers and livelihoods are in jeopardy from this.”

“Any little thing I can do to help, especially if I’m just showing up and telling jokes, which is all I like to do anyway,” Bealum added.

In many cases, the clubs where performers recorded their sets are near and dear to them. There are good odds that anyone who’s been out past ten on a weekend has been to Church—aka the Press Club’s Sunday night dance party—and has a story about it. DJ Larry Rodriguez—aka Flower Vato, the night’s DJ for more than 14 years—has many.

The Press Club’s situation is unique within the framework of ShelterFest: The club’s building was sold in January. While bars and nightclubs wait for state and county approval to reopen, the Press Club owners are moving to their new location (previously Midtown Barfly). Rodriguez’s ShelterFest set was his last at the Press Club’s current location.

“I put the tapestries up that I always put up Sunday night. And just because it’s part of the special, it was the… tapestries that are up there the day-glo mandalas, you know, that are fluorescent, UV lit mandalas that I have all over the club.,” he said. “I think it distinguished my night from other nights and it’s made it special as far as the spirits that everybody felt there. And so I thought it was important when ShelterFest wanted to do the set inside of the club.” Rodriguez says. “[But] that week everything had to go I mean while they were filming ShelterFest, you know at the Press Club. Almost everything was just about gutted out.”

With the Press Club in the process of moving, the owners have asked that their share of donations go to Luna’s Café, the longtime juice bar that doubled as a home for performers of all stripes in the evenings. It’s a gesture that captures the spirit of the event: the creative community taking care of its own.

And there’s yet another layer to ShelterFest: In addition to entertaining people sheltering at home, Aiello has pledged to give 10% of event proceeds to Sac Safe Space for Unhomed Youth, in effect offering shelter to more of the Sacramento community. The ShelterFest site even includes a page for those who’d like to donate directly, with options to provide socks, sleeping bags, and tents—especially needed items at all times of year, but especially as Sacramento’s cold and wet winter approaches. Those donations can be made through the site, whether one chooses to purchase a ticket or not.

A six-hour online festival is admittedly quite a lot for a single viewing session. Aiello is still working on the logistics of offering the stream after Saturday, while making sure artists and Sac Safe Space for Unhomed Youth are compensated fairly. Still, at $25 for six hours of entertainment and a charitable donation, it’s a not a bad way to spend a Saturday afternoon.

Be the first to comment on "Taking the BBQ online"