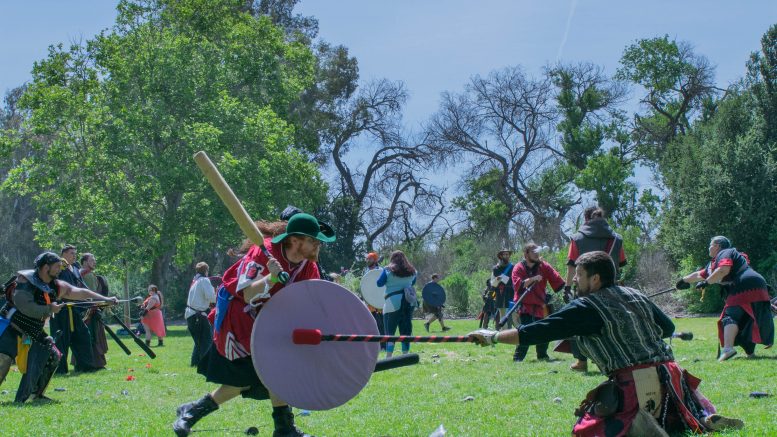 “When I’m trying to sell Amtgard to the normies, it’s ‘I go out into the park and hit nerds with sticks,’” says Justin Smith, also known as Clenawe of Thor’s Refuge.

Amtgard is one version of a subset of gaming known as “Live Action Role Playing,” or “LARPing,” for short. The Amtgard universe is represented in chapters worldwide; Thor’s Refuge in Sacramento is just one chapter of Westmarch, which includes much of California, part of Northern Nevada, and Hawaii.

While the faux-fighting—the aforementioned hitting nerds with sticks—is what LARPing is known for, it’s just one aspect. Cooking, fake weapon building, and various crafts earn points within the game, as does community service, both within the game and in the “normie” world.

The largest out-of-game community service event is Food Fight, which began this week. Each September, every Amtgard kingdom competes against the others by running its own community food drive. They are a mixture of canned food drives, volunteer hours at food banks and cash donations.

Westmarch has won Food Fight for so many consecutive years that Amtgard has had to adjust how the points are tallied.

Smith’s compatriots, Ohlanna (Monica Smith, married to Justin/Clenawe) and Raven Lunatic (Jodi van Tine, who has been organizing weekly Zoom “feast” during the pandemic), each cite Westmarch’s Food Fight Board for each year’s successful drive.

Understandably, this year’s Food Fight will be a bit different. When Amtgard began the drive, the website explains, September was chosen “because it falls in a bit of a dead zone for food banks,” which have often supplied free lunches to children during the summer and thus are short on supplies while also preparing for the winter demand. “By focusing our efforts in September it provides some initial relief and often helps food charities better prepare for the winter season.”

During the pandemic, with continued high unemployment nationwide, food banks are even more hard-pressed to keep their shelves stocked.

And the economic downturn and pandemic-related precautions will complicate all areas of Food Fight. There will be less money to either donate directly or to buy nonperishable food, and there will be fewer volunteer opportunities, with Westmarch spanning such a large area and safety precautions varying by food bank and by players’ health.

Monica Smith anticipates that most donations will come in online this year, so Thor’s Refuge is using PayPal and hoping to use its Facebook page and Instagram account to garner attention for their cause.

“The more people we bring to other people,” she said, “the better we feel about it.”

Find out more about Thor’s Refuge, Food Fight, and LARPing at facebook.com/groups/Thors.Refuge/