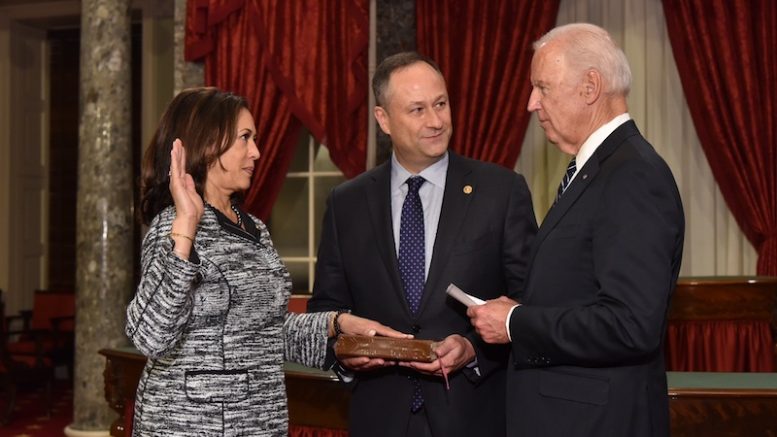 Kamala Harris takes the oath of office as a U.S. senator from Vice President Joe Biden in January 2017. (Photo from Wiki Commons)

Legalization of cannabis has been relatively ignored as a presidential campaign issue, even though two-thirds of Americans support the move, according to a Pew Research poll last November.

Joe Biden’s pick of Sen. Kamala Harris of California as his running mate, however, raises new questions about cannabis as a campaign issue and whether she might try to influence his thinking on the subject.

But what are the candidates’ current campaign positions on cannabis and how do those stands differ from one another?

President Trump expressed support for a 2018 bipartisan bill by Sens. Elizabeth Warren of Massachusetts and Cory Gardner of Colorado that would exempt cannabis from the Federal Controlled Substances Act and strengthen the states’ right to legalize.

But Trump has also added three signing memos to legislation passed by Congress that reserve his right to enforce all federal cannabis laws as he sees fit.

At an Aug. 17 campaign rally in Wisconsin, Trump told former Gov. Scott Walker: “The next time you run, please don’t put marijuana on the ballot at the same time you’re running. You brought out like a million people that nobody knew were coming out.”

During the 1980s and ’90s, Biden was a loyal soldier in the “war on drugs,” introducing anti-narcotics legislation and supporting anti-crime bills. But as vice president, he supported President Obama’s efforts, through the Justice Department’s “Cole Amendment,” to stop enforcing federal cannabis prohibition in states where medical and/or recreational cannabis was legal.

Biden’s position for the 2020 campaign includes decriminalizing cannabis on the federal level, rescheduling it as a Schedule 2 drug, letting states set their own policies on legalization and expunging old cannabis convictions. Those recommendations are also in a unity platform released in July by the campaigns of Biden and Sen. Bernie Sanders, his chief rival for the Democratic nomination.

Critics including Justin Strekal, political director at the National Organization for the Reform of Marijuana Laws, called Biden’s policy “a half loaf,” saying it fails to match the views of most Americans.

“Federal marijuana prohibition was implemented in 1937 explicitly out of racial animus,” said Strekal. “This criminalization is not, nor has it ever been, an evidence-based public policy.”

As San Francisco district attorney and California attorney general, Harris put plenty of cannabis users behind bars. She fought past legalization efforts, including Proposition 19 in 2010 and even co-authored an argument against Prop. 19 in the voters guide.

Harris came out for decriminalization of cannabis in 2015, after her re-election as attorney general. But in 2016 she stayed out of the legalization debate on Proposition 64.

In 2018, as a U.S. senator, Harris co-sponsored a bill by Sen. Cory Booker of New Jersey to legalize adult recreational use. In her presidential campaign book, “These Truths We Hold,” Harris supported comprehensive cannabis reform.

“As marijuana becomes legal across the country, we must make sure everyone—especially communities of color that have been disproportionately impacted by the War on Drugs—has a real opportunity to participate in this growing industry,” Harris told Rolling Stone last year.

In July 2019, Harris introduced the MORE (Marijuana Opportunity, Reinvestment and Expungement) Act, which would go further than previous legislation by completely removing cannabis from the federal Controlled Substances Act. It would also prevent discrimination based on a person’s cannabis use, and would award business grants to those impacted by the “war on drugs.” Finally, the MORE Act would set up a separate office within the Department of Justice and levy a 5% federal tax on cannabis to pay for everything.

Still, her critics say her overall record isn’t always the one of criminal justice reformer she claims to be.

“Senator Harris has evolved significantly on the issue of cannabis policy over the course of her career, showing that change is possible,” said Tiffany Devitt, president of wellness at Santa Rosa’s CannaCraft. “We deeply appreciate her sponsorship of the MORE Act, which not only de-schedules cannabis but includes important restorative justice provision.”

But it’s unclear whether Biden will hear Kamala’s call on cannabis reform.

“We’re hopeful she will influence Vice President Biden to move in the same direction,” said Devitt.

Housing activist Amy Farah Weiss, who works with San Francisco’s homeless population on drug addiction, is also hopeful. “Our leadership must also consider easy, affordable, consistent, and informed access as one of the big social equity issues for cannabis,” she said.

Others, however, don’t expect legalization will be at the top of the to-do list if Biden and Harris are elected.

“Joe Biden is firm in his belief marijuana should be decriminalized, not legalized,” said Kevin Sabet, president of the nonprofit SAM (Smart Approaches to Marijuana).

Sabet told SN&R that if Sanders supporters couldn’t change Biden’s mind, no one will. “I don’t see this as a fight Senator Harris will feel is worth having. She only recently came out in favor of legalization,” said Sabet. “This is not a high-priority issue, and I don’t expect any changes.”

In July, Harris told Washington political reporter Matt Laslo: “I think it is good that he is in that place of understanding that, at the very least, it should not be a criminal matter.”

“I don’t see this as a fight Senator Harris will feel is worth having. She only recently came out in favor of legalization.”

Harris suggested that she will not push Biden, but let him evolve on the issue.

But as Trump referenced last month, at least four states—Arizona, Montana, New Jersey and South Dakota—have cannabis legalization measures on their November ballots, which could increase turnout among pro-cannabis voters.

“As we have seen in previous elections, marijuana initiatives increase voter turnout in nearly every demographic,” said NORML’s Strekal.