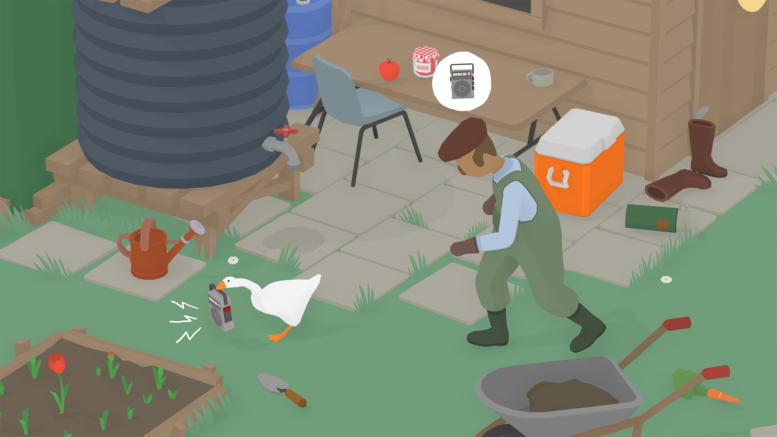 Video games offer a virtual escape and means to communicate with friends at a safe social distance. Mind the geese. (Photo courtesy of Untitled Goose Game)

Video games offer an entertaining escape, especially while stoned.
Here are five to consider this 420 holiday.

As staying at home becomes the new normal, more people are experimenting with the virtual escape that video games provide. The experience can also be enhanced with cannabis.

Pairing the two together seems counterintuitive since video games require fast decision-making and even faster reflexes and weed is known to impair both. Still, finding the right video game to elevate the right high is an experience. So SN&R compiled a list of video games to play while stoned because we all need a way to pass the time, just in case we’re on lockdown for the foreseeable future.

There are no expectations for Goat Simulator. Those familiar with the “simulator” moniker may think of Forza in the racing sim genre or The Sims in the life sim genre, games meant to “simulate” their real-life counterparts. But Coffee Stain Studios’ Goat Simulator is nothing like real life. It’s a zany physics-based action game in which you control a goat doing very non-goat things: flying around the world with a jetpack, using your tongue as a grappling hook, causing the kind of mayhem a goat can only hope to accomplish. There are no time limits, no “game over” states and, aside from the optional objectives, there’s nothing driving you to “finish” the game. It’s hilarious enough that Goat Simulator lets you jump and ram however much you want, but throw in the abject and wanton chaos you can create and you’ve got a recipe for boundless laughs when stoned.

Mario has eaten herbs that give him all kinds of enhancements, from extra lives to increased height, so playing Nintendo’s Mario Kart 8 with some fire flower is an obvious combination. Thanks to its eclectic use of vibrant colors, the game takes on an intoxicatingly kaleidoscopic effect. Sure, the point is to finish the race and theoretically come in first place. But it’s easy to get lost in Mario Kart 8’s gorgeous visuals. It’s the kind of the game that’s already stunning to look at, but that also becomes more captivating as you absorb renditions of classic levels for a new kind of gamer and original tracks that introduce fresh mechanics to keep veterans alert.

Notes: Mario Kart 8 was developed and published by Nintendo. It’s available on Nintendo Switch and Wii U, though I don’t know anyone who still loves to use their Wii U.

Skateboarding and weed have gone hand-in-hand for decades, so playing EA Black Box’s Skate 3 when stoned makes sense. Because skateboarding can be aggravating and defeating, cannabis helps ease these constricting emotions, giving you the patience to string together tricks so nonchalantly you might be tempted to actually try them. Or you could just push around the game’s fictitious Los Angeles-like city jamming to the incredible soundtrack. A good playlist can set the mood for a great session, and with Skate 3’s soundtrack—composed of artists including Beastie Boys, Dinosaur Jr., Joy Division, Kanye West, Mudhoney, Pixies, The Thermals and so many more—there’s not a single track you can’t smoke a bowl and cruise around to.

Notes: Skate 3 was developed by ea Black Box and published by Electronic Arts (commonly referred to as EA.) It’s available on PlayStation 3 and Xbox 360, but the most accessible way to play it is through Xbox One.

A miniature golfing simulator is an odd suggestion to play when stoned, but Triband’s What the Golf? is an odd game that flips the activity on its head. Sometimes you’re playing traditional mini-golf. Other times, the game will put you in control of gravity or a rocket or an entire house or something else so bizarre you won’t help but crack a smile. It’s the kind of feel-good, low-stakes game that, when you add cannabis, becomes both bonkers and surreal. The varied obstacles and the unexpected mechanics make What the Golf? an experience that provides plenty of laughs during any play session, long or short.

Notes: What the Golf? was developed and published by Triband. It’s available on IOS (via the Apple Arcade subscription service and as a single-purchase download) and Nintendo Switch.

House House’s Untitled Goose Game may be the most well-known on this list, gaining enough attention to spawn a virtual desktop assistant akin to Microsoft’s Clippy. And while that praise is warranted, the cutesy puzzler is certainly is better when stoned. Completing the grocery list of challenges before moving on to the next grocery list is a frustrating commitment. But smoking some good weed while combing through the game’s idyllic setting looking for things to mess with is devilishly charming. You can steal people’s reading glasses, broadcast your shenanigans on television, set up a picnic for yourself and so much more while playing as a goose in what is probably some people’s nightmares. If trapping someone in a phone booth and honking at them isn’t enough of a gut-buster, then I don’t know what is.