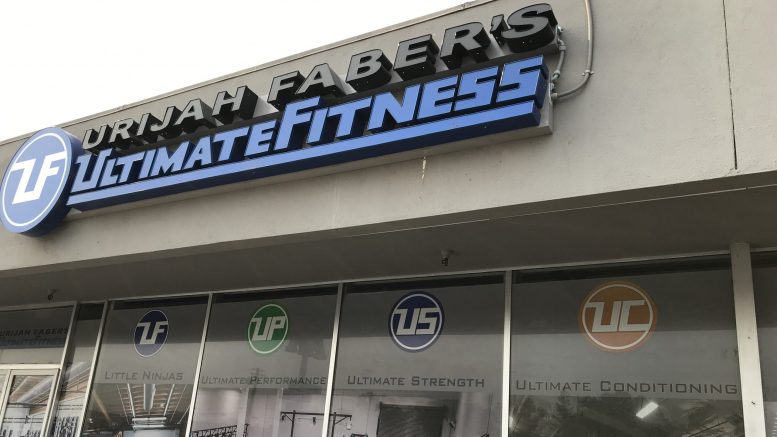 Since mid-July, gyms in Sacramento County have only been allowed to operate outdoors. But on Saturday, that wasn’t stopping people heading into a building in a strip mall near Sacramento State.

Inside the Ultimate Fitness at 6700 Folsom Blvd., few of the maybe 10 or 20 gym-goers visible from the front entrance appeared to be wearing masks or social distancing. Ice Cube’s 1994 single “You Know How We Do It” thumped through the speakers as some people chatted near workout equipment.

“We’re just encouraging people to use their best judgment,” said the gym’s owner, UFC Hall of Famer Urijah Faber. “We’re taking temperatures and questionnaires anytime anybody steps in the door, providing classes where people can be socially-distanced upwards of eight feet in most of the classes.”

A Sacramento County public health order has restricted gyms to operating only outdoors since July 14.

“With gyms, especially if they’re indoors, people are exercising and often breathing hard,” County Public Health Officer Olivia Kasirye told SN&R Monday. “Often times, they are close to each other and sharing equipment as well. And so those are all factors that lead to an increased risk of spread of COVID-19 infection.”

Kasirye said there have been a few reports of COVID-19 cases associated with gyms, though she wasn’t aware of any related to Ultimate Fitness.

Faber, who said he closed his gym for 2 ½ months after the pandemic started in mid-March, said that he’d “absolutely” move operations for Ultimate Fitness outside if he got a call from county health officials.

That may happen soon.

Kasirye said that Public Health has been working with environmental and code enforcement staff and that the county might look to shut down gyms that continue to operate indoors. She also acknowledged that it’s “a consideration and a possibility” that the county might prosecute rogue gym operators, which has happened in at least one other California county.

“Most of what we’ve been doing so far has been the education and reminding people of the importance of following the guidance,” Kasirye said, “because it’s only when all of us work together that we can actually get to the point that we allow these places to open.”

She added, “So for them to continue doing that is actually kind of hurting everybody else. And so it’s important it to make people realize and try to encourage them to do the right thing. If not, then we will have to discuss next steps.”

On Sunday, Faber, who still fights professionally at 41 and works out frequently at Ultimate Fitness, provided SN&R with a tour at closing time of the gym, which is about 40,000 square feet and a mix of high-ceilinged rooms and roll-up doors with outdoor workout space.

For the time being, outdoors might be the only workout space that gyms can legally offer in most of California. On Friday, Gov. Gavin Newsom announced a new four-tiered system that takes effect Monday and permits certain activities based on a county’s COVID-19 risk level.

In Sacramento County, which currently falls in the most-severe risk tier, gyms may only operate outdoors. Gyms can reopen indoors when they reach the next tier, though only at 10%. At the lowest tier, gyms may operate indoors at 50% capacity, with other restrictions.

Ultimate Fitness has observed some directives, with hand sanitizing stations throughout the gym, though a recommendation to wear face coverings at all times indoors except while showering hasn’t been observed as stringently.

“I’d actually love to talk to Gavin Newsom myself… because it’s been such a skewed message,” Faber said by phone, hours after SN&R stopped by his gym. “I really don’t understand what the heck is going on.”

“It’s familiar people that you trust, it’s doing something that you really need right now, which is a mental and physical outlet.”

Public opinion has differed on if gyms are safe during COVID-19. An article in Science magazine in late June said that gyms could operate safely, though the author added, “Every child returning to school and every Zumba fan returning to class is taking part in a large, uncontrolled experiment.”

But if there’s paranoia, it’s not to be found at Ultimate Fitness.

“They have a form you fill out to make sure you don’t have any symptoms for it,” a gym-goer who identified himself as Nathan said Saturday. “So I feel like that is reassuring.”

Faber said he wasn’t aware of any COVID-19 cases associated with his approximate 600-person membership, though a few members have opted to stay away and keep paying dues during the pandemic.

David Drelinger said Saturday after shopping with his six-year-old son at a Grocery Outlet that shares the parking lot with the gym that he wouldn’t avoid the store. But it gave him pause “because it’s very likely that if they’re not observing [precautions], the way they’re breathing, heavy breathing on each other, that it would be a place where it would be very easy to spread COVID,” Drelinger said.

Faber confirmed that he received a U.S. Small Business Administration Paycheck Protection Program loan to keep his gym open. He described Ultimate Fitness as a passion project, saying he’d be making more money if he closed it down. Various websites show Faber’s earned more than $3 million in his fighting career.

Asked about his motivation to stay open, Faber said that Ultimate Fitness was one of the most comforting places for him and many members.

“It’s familiar people that you trust, it’s doing something that you really need right now, which is a mental and physical outlet,” Faber said. “It’s also strengthening immune systems. And for me, myself, it’s nice to feel normal inside the gym.”