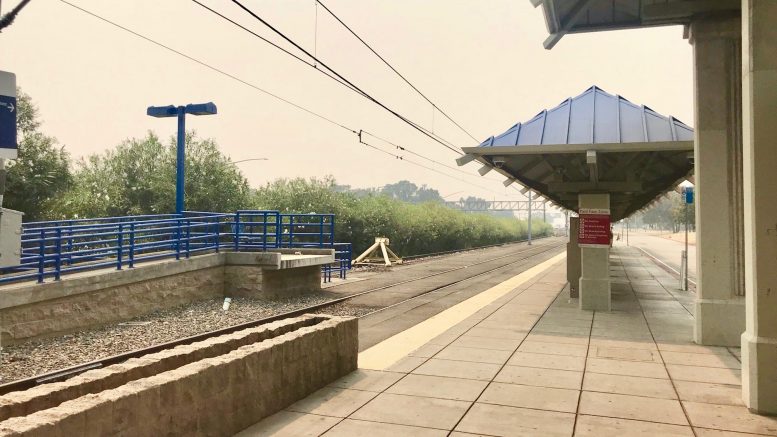 Nicory Spann was convicted of trying to kill a Sacramento County Sheriff’s deputy at the light rail stop at Watt Avenue and Interstate 80. (Photo by Scott Thomas Anderson)

While reporters and family members were watching Joseph DeAngelo get sentenced for his reign as the Golden State Killer, a different crime saga was quietly ending in another Sacramento courtroom. Nicory Spann, who shot a Sacramento Sheriff’s deputy in the face at point blank range before attempting to execute him with a second shot, was sentenced Aug. 21 to 32 years to life in prison.

The incident happened June 27, 2017 at the light rail station where Watt Avenue meets Interstate 80 in North Highlands. Deputy Alex Ladwig, who was assigned to transit patrol, saw Spann near the platform and tried to check his ticket. Prosecutors say that Spann began cursing the deputy and then suddenly lunged at him. The two were in a tangled fight for a few seconds, until Spann managed to get his hand on Ladwig’s service pistol. Pulling it from its holster, Spann shot the deputy through his jaw. Prosecutors say Spann then tried to finish Ladwig off with a second round, though he missed.

Laying on the ground, Ladwig reportedly yelled for nearby passengers to take cover.

Spann ran away as Ladwig got a radio call out for help. He soon hid inside a Red Roof Inn only a block from the light rail stop.

According to the San Jose Mercury News, Spann had pleaded guilty in 2009 to being an accessory to a double murder in Mountain View, in which a brother and sister were killed during an armed home invasion. One of the victims had an eight-year-old son who was in a nearby bedroom during the slayings. Spann, who had initially been charged with murder, was sentenced to 16 months in prison for his role in the killings.

Spann’s criminal career then resumed in Sacramento County, where he was convicted of battery, brandishing a weapon, making criminal threats, destroying private property and resisting arrest. Spann has also been accused of sexually harassing and stalking female school students in Galt.

After the light rail shooting, Sacramento law enforcement surrounded the Red Roof Inn and evacuated the motel before moving with guns drawn from room to room. They reportedly found Spann in a second-floor room alcove, “lying on the ground in fetal position.”

Ladwig was hospitalized for 11 days in an intensive care unit. He survived.

In mid-July, Spann was brought to trial on charges of attempted murder of a peace officer and assault with a firearm causing great bodily injury. Deputy District Attorney Kristen Andersen walked a jury through the evidence, which eventually resulted in guilty verdicts on both charges. Judge Geoffrey Goodman handed down Spann’s sentence.

In a statement, the Sacramento County Deputy Sheriff’s Association praised the verdict, calling Spann’s attack on Ladwig “unprovoked” and “vicious” and claiming the defendant had openly bragged about his actions during the trial.

“Alex has had a long, grueling road to recovery, including long nights for he and his wife at the hospital, and additional reconstructive surgeries to try to repair the damage done,” the statement read. “Meanwhile, Nicory Spann continued his personification of evil, when, during his testimony he said, “I don’t really give a f— … He got shot in the face, and I’m happy about that. Pop pop, all in his mother f—–’s face. I did that s–t’.”

“We applaud the jury for delivering justice for Alex,” the statement concluded.