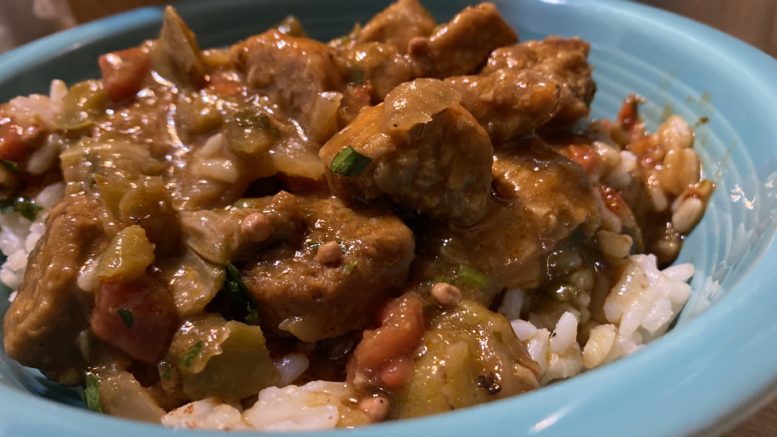 Whatever mental associations Mardi Gras conjures—religious observances or rowdy partying in the streets—it’s called “Fat Tuesday” for a reason. The day’s Christian roots call for a feast just before the beginning of Lent, an austere period leading to Easter. In the U.S., those foods often take their cues from Louisiana, where the Mardi Gras celebrations in New Orleans are the stuff of legend.

Unfortunately, most of the food associated with Fat Tuesday is anything but vegan friendly. There’s good news locally, though: Revolution Winery & Kitchen is offering a month-long Mardi Gras menu during what would be known as Happy Hour in the pre-pandemic world.

There are still happy times, but during COVID-19 I beg you to order to-go and be happy somewhere other than a crowded patio.

Revolution Wines, at 2831 S Street in Midtown, has always been good to vegans, and the Mardi Gras menu is no exception. Four of six items are vegan, two savory and two sweet.

Fans of Rev’s Buffalo Cauliflower will likely enjoy the Louisiana Fried Oyster Mushrooms. The mushrooms are devoid of the oft-cited sliminess that mushroom-haters complain about, and the batter holds in place. “The batter does what it’s supposed to do” sounds like faint praise, but truly, it seems to be a feat for some, and it’s perfect here. It’s served with both veganized sriracha remoulade and aioli, which seems a bit of a mayo overkill, but both complement the mushrooms well.

I respect any place that goes beyond a veggie burger (though if you want that, Revolution has one of Sacramento’s best), but in recent years Revolution has been leaning heavily on the Beyond family of products for its vegan fare. It’s in the vegan pastas, taquitos and the brunch’s vegan gravy.

The Mardi Gras menu’s main dish, Shelly’s Beyond Southern Gumbo, follows suit—perhaps a bit too much. It was well-seasoned, but my serving resembled neither soup nor stew. The expected and welcome onion and bell pepper were there, though I may have missed the celery that completes the trinity.

Revolution’s gumbo gets along with the Beyond itself. Despite being meat-free for most of my life, I have just enough of my memories as a meat-eating Southerner to expect a little more variety in my gumbo. Well-seasoned fake meat is great, but more broth of any consistency, plus a more robust variety of textures would have helped me get past the (tasty) boulders of Beyond. The gumbo is served with perfectly-cooked, pillowy rice—which sounds like the same kind of backhanded compliment as I gave the mushroom batter above, but you’d be surprised how often restaurants misfire on basics such as white rice.

While I enjoyed both of Revolution’s Mardi Gras desserts, we seem to be fundamentally at odds with what a beignet is. The simplest, most often heard description of a beignet is “kind of like a donut.” The basics are there: It’s a sweet, airy pastry that…well, yeah, it’s an elevated donut. Revolution’s beignets have nice flavor and a good vegan caramel, but they are dense and heavy, more the consistency of a hush puppy. There were hints of banana in the batter, but nothing pronounced.

On the other hand, the King Cake Cigars were an excellent take on the traditional, colorful ovo-lacto version. The cigars resemble tubed baklava, a sugary paste of cinnamon and pecan in a cylinder of phyllo dough covered in a light, sugary pastel glaze. Traditionally, King Cake has either a dried bean or a small plastic figurine meant to represent the Son of God baked inside; it’s a sign of good luck to accidentally choke on a tiny plastic baby Jesus. The cigar solves that problem: There’s no place to hide any such prize. Still, it’s an innovative and lovely take on the traditional version, and I’d happily eat some variation on it year-round.

Not every dish on this seasonal menu gets my stamp of approval, but the ones that did made high marks. Mardi Gras itself is just under two weeks away, but you’ve got the whole month to feast, whether you observe Lent or not.

Be the first to comment on "Planet V: Mardi Gras at Revolution Wines"