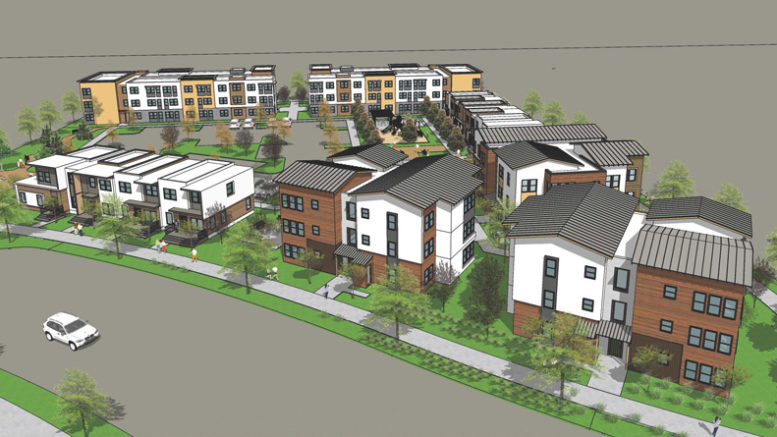 When it opens, Mirasol Village in Sacramento’s River District will not be your grandfather’s public housing project. The entirely new neighborhood will feature affordable housing, of course, but also a light-rail stop and amenities such as a park, community garden, fruit tree orchard and residents’ services center.

However, there’s some sticker shock: the 487 units in the Sacramento Housing and Redevelopment Agency project carry an average construction cost of $425,000. And they will take five more years to complete.

That runs counter to what Mayor Darrell Steinberg and the City Council badly want—more affordable housing built more quickly and cheaply to start making significant progress in the rent and homelessness crisis.

“We’re not keeping up, and we’re not getting ahead,” Steinberg told SHRA officials at the Nov. 12 council meeting.

On Dec. 3, the council directed SHRA to work on a plan that includes cabins, a motel conversion and parking lots where people can sleep in their cars—with the goal to add 500 beds for the homeless in 2020.

Also, the mayor wants the city to play a bigger role in the very complicated financing of affordable housing. That includes new state money: The city is expected to get $2 million a year from Senate Bill 2, passed in 2017. In addition, City Hall is looking at using some new sales tax money from Measure U, approved in 2018, to float a $100 million affordable housing bond.

Steinberg said he wants the city to “work arm in arm” with SHRA and isn’t being critical, but the agency has come under scrutiny before. While a 2015 city audit found that the cost for its housing projects were comparable to other California cities, it also called for SHRA to be more transparent about its finances.

As a rule, affordable housing is more expensive to build than market-rate. Since federal money is involved, workers must be paid the prevailing wage, which increases construction costs by 25% to 30%, SHRA says. And to guarantee that a unit stays affordable long term, a public subsidy is necessary.

SHRA officials stress that Mirasol Village, in particular, is much more than just a fixed-up public housing complex. It includes new infrastructure and streets and promises to break the cycle of generational poverty.

Mirasol Village will cost about $310 million total, including $220 million for housing. Of the 487 units, 218 are affordable, 143 tax-credit affordable, 68 workforce and 58 are unrestricted.

The remainder of the cost is for the park, light-rail stop and the center that will provide comprehensive services to residents, including job training, adult education and youth programs.

After a decade of planning and other work, demolition is complete of the old 22-acre Twin Rivers site and its 218 units, built during the 1940s as one of Sacramento’s first public housing developments. After new water and sewer lines, roads and sidewalks are installed, construction of the first housing is to begin in early 2020. The first residents are scheduled to move in late 2021, but the entire project won’t be complete until 2024.

It had been known as the Twin Rivers project, but was recently renamed Mirasol (Spanish for sunflower) Village after input from area residents and businesses. The streets will be named after different butterflies.

Mirasol Village may turn out to be as transformational as advertised. Still, in this moment in Sacramento, it seems at least a little out of place.

Be the first to comment on "Editor’s note: Out of step on housing?"