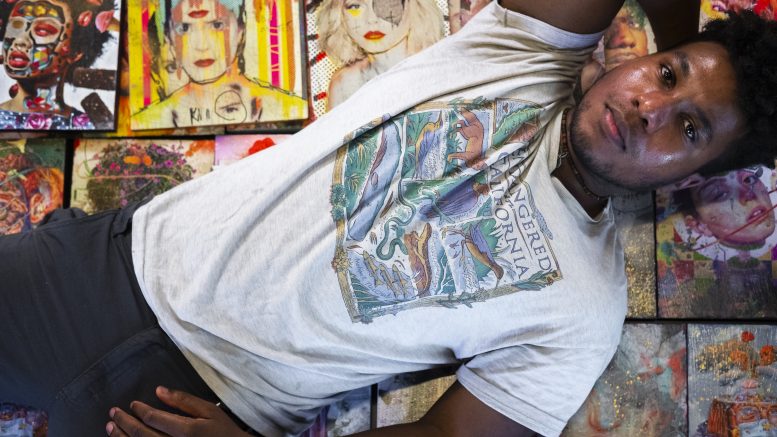 Brandon Gastinell uses celebrity photos to create works of art, digitally. But his doubts about success have him questioning whether to leave the art world altogether. (Photo by Patrick Hyun Wilson)

“I’m trying to figure out how to put cereal in the box.”

Immediately, he shook his head, hand raised to his brow and laughing at how seriously he had just said that.

While that sort of issue doesn’t come up in most people’s daily work, for artist Brandon Gastinell, it is a legitimate problem to solve.

The box in question, a Miley Cyrus-themed cereal box named “Miley Flakes,” is part of a pop-up art project that Gastinell was working on before the COVID-19 pandemic closed public spaces.

“We were going to start doing pop-up galleries where I was going to convert the space into a shopping center. So, we’d stock up the shelves with the pieces that I made, like Miley Flakes, soup cans and things like that,” Gastinell said.

Gastinell is best known to his 5,000-plus Instagram followers for his multi-media portraits of celebrities. He incorporates humor into his work, but beneath the surface-level irreverence, he takes his work seriously.

“At the end of the day I’m still putting in a shit ton of time into creating that thing,” he said. “Whether the piece is serious or not everything surrounding it is.”

One of the questions he has taken seriously throughout his career is his definition of success. Despite his multiple solo exhibitions in Sacramento and recognition from celebrities including Tyler, The Creator and Billie Eilish, Gastinell still has trouble believing that he’s making it.

Gastinell ignored his 18-year-old self’s vow and continued to pursue a career as an artist. However, doubts continue to eat at him; he has contemplated leaving the art world behind entirely.

“I’ll get random messaging from people saying like, ‘Your art is so great,’ or something like that… That just gets me through the day— things like that— ’cause I want to quit all the time,” he said.

Part of his self-doubt stems from how he views his successes. Even after seeing the movie poster he designed for the 2018 film Blindspotting displayed on a nearly three-story tall monitor in an Arclight Cinemas theater, he hardly celebrated the accomplishment.

“I look at it and I’m like, ‘Okay, cool. Move on. Next.’ Because if I’m dwelling on one thing trying to, you know, ride it as long as possible, that’s kind of a bad thing,” Gastinell said. “That’s probably why I’m depressed all the time.”

While his forward-thinking attitude doesn’t allow room to celebrate his successes, Gastinell’s focus is to ensure that his work stays ahead of the curve.

For now, Gastinell says, that means leaving behind digital art for three-dimensional art and physical media. While creating digital work, he would push himself to make it “crazier and crazier” to capture the attention of people scrolling through Instagram.

“Like if this piece isn’t crazy enough, people’s heads aren’t going to explode,” he said. “I’m trying to stay ahead of just making art for your phone.”

After they connected, Gastinell collaborated to create cover artwork for the 2019 album, The Fall of Hobo Johnson.

In the piece, Lopes Jr. slumps his shoulders in front of a plain off-white backdrop. His face is completely obscured by frantic strokes of blue and white while a variety of highly detailed garden flowers sprout through his unkempt hair.

“When I first did it for him, it was just crazy, and that’s what I was talking about, I was doing things to make it crazy,” Gastinell said. “Barbed wire, shooting flames, fire, smoke, ants and bugs crawling all over his face and he was like, ‘Naw. Tone it down.’ And I was like, ‘Okay.’ So I scaled it down.”

Although the piece is relatively simple compared to his other works, Gastinell considers it one of his favorite pieces.

“I knew it was going to be everywhere. It can be blown up and examined, and I was like, every pixel, every single hair has to be perfect,” Gastinell said. “People are re-creating it all the time. Even still, I’m getting tagged in a bunch of stuff where people are painting it, being inspired by it….Someone did a mural of it in L.A. It was crazy.”

Seeing the work being sold on vinyl records at stores across the country felt great for Gastinell, but the artist continues to push himself, past his own happiness, in search of the next thing to work on.

“I always feel bad that I’m not f—ing happy,” he said. “I do like being happy. I think everybody does. I just don’t want to get complacent.”