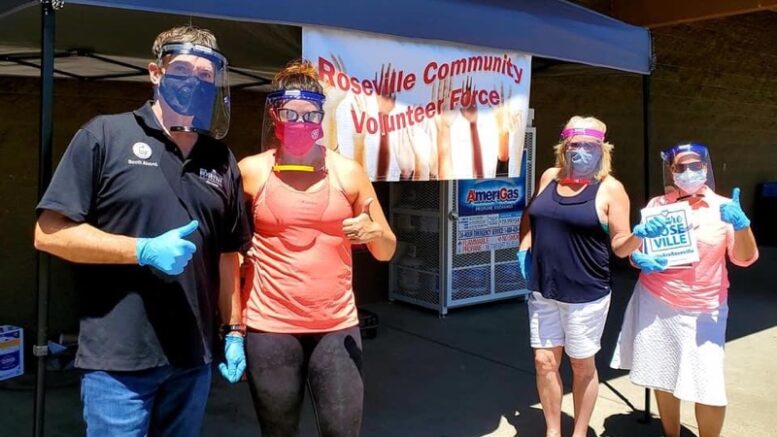 In Roseville, a tale of spontaneous generosity unfolded for the vulnerable during COVID-19

Last December, Debra Pughsley and her mother Pamela were both diagnosed with cancer. After undergoing surgery at nearly the same time, the Roseville mother and daughter were preparing to start twelve weeks of cancer treatment. Then coronavirus appeared in Placer County.

“I was already going through my life being turned upside down when COVID hit,” Debra recalled.

The Pughsley family was suddenly playing the odds on a roulette table of health risks. Californians with compromised immune systems were told to limit their exposure to others as much as possible. Debra and Pamela were both in the danger zone because of their treatments, but they had to keep making trips for their oncology appointments. Debra’s husband, a postal worker who was deemed essential, had to remain on the job, too.

With layers of peril already blanketing their lives, the last thing the family wanted was to add another by grocery shopping. Yet they needed supplies, particularly safety and sanitation items to bring on trips to the medical center. That’s when Debra heard about a network loosely organizing around Roseville City Councilman Scott Alvord’s efforts to help locals during the pandemic.

Not usually one to ask for help, Debra eventually messaged the group about her family’s situation. Two hours later, a box appeared at her house with every hard-to-find item she needed, including hand sanitizer, disinfectant spray and face masks.

“They brought enough supplies to get me and my mom all the way through our cancer treatments,” Debra said. “Some people drove all the way from the other side of the city to bring things.”

They were part of the Roseville Community Volunteer Force. Since mid-March, more than 1,800 residents have helped the group support those most at-risk for contracting COVID-19. Volunteers have made numerous shopping trip, distributed more than 6,000 face masks and delivered important medical supplies. They’ve even done yard work for the elderly.

There is no mystery to how the group functions. One member will hear about someone’s specific need, post it on the group’s Facebook page and then watch other members respond.  The effectiveness of the volunteer force often comes down to simple but meaningful gestures from strangers.

For Debra, what the group did was more than meaningful.

“When this happened, I didn’t know what to do or who to turn to,” she said. “They made it so easy; and if it wasn’t for them coming together, finding all that stuff and then delivering, I don’t know where my we would be right now.”

The osmosis of earnestness

Even before Alvord was elected to the city council in 2016, he had a reputation as one of Roseville’s most active volunteers. He served on Placer County’s Homeless Advisory Committee, worked with a local nonprofit on supportive housing, helped run several neighborhood associations and directed the downtown merchants’ group. So it’s not surprising that when hoarding and panic-buying crippled the supply chain in Placer County’s largest city, worried residents reached out to Alvord.

The councilman heard from seniors and immuno-compromised people who were running out of essential items and frightened to go hunt for them. At first, Alvord shared his personal supplies, but he knew that wouldn’t last long. He created the Roseville Community Volunteer Force as a Facebook group for finding supplies and coordinating deliveries. A lot of locals were ready to help.

Alvord, a longtime business development consultant, started doing what he does best—building databases. This helped the group track who had extra supplies, who needed them and who would volunteer to bridge the gap.

As more and more residents joined the Facebook group and offered assistance, Alvord and company began putting up posters at senior living apartment complexes so people would know they weren’t alone.

Erin Renshaw, one of the volunteers who shopped for seniors, has a stable job as a local emergency dispatcher. She says that made her want to step up for those without stability. She’s brought everything from sanitary wipes to blood pressure medication to high-risk locals staying at home.

“You’d hear things like, ‘We didn’t know what we were going to do,’” Renshaw recalled. “For me, it was a matter of knowing that I could still go out to the store, but there are people who can’t, and I’m in a position to do something.”

Sharon Crowley, a Roseville real estate agent and another volunteer shopper, realized that with the economic devastation of the lockdown, it was not just seniors and immuno-compromised people who were hurting. On one errand, Crowley shopped for a single mother of two who was literally running out of food. The children had made Crowley a big “thank you” sign when she pulled up. In another instance, Crowley brought hand sanitizer, personal hygiene products and a portable cooler to a woman who was living in her car.

“She was just down on her luck,” Crowley said. “She’s kept in touch with me since then.”

For Crowley, staying focused on positive actions has helped manage her own stress about the pandemic.

“What I’d always tell me kids is, ‘When you’re feeling sad or down, go do something nice for somebody,’” she said. “Doing this made me feel better about the way things were going.”

Suddenly everyone needed a mask.

At the beginning of April, Singapore released findings that indicate face coverings can limit the spread of coronavirus. Researchers are still trying to determine exactly how much benefit, but there’s general agreement that masks in public helps prevent asymptomatic and pre-symptomatic carriers from spreading the virus.

There were people across Roseville who wanted to wear masks as a simple safety precaution for those around them. But, similar to hand sanitizer, thermometers and toilet paper, the supply chain was failing. The Roseville Community Volunteer Force filled the gap.

It started with volunteer Nancy Klevickis, a customer service manager for Hewlett-Packard who has lived in Roseville for 30 years. She coordinated an effort by ten seamstresses to produce masks and led two fundraisers to pay for materials. Members of the volunteer force ransacked their own bedrooms and wardrobes.

“People were going through the closets to come up with fabric, elastic and threads,” Klevickis remembered. “I’d be driving around, picking it all up, because you don’t want to keep the seamstresses waiting.”

Laura Crechriou of Clever Designs in Roseville and other sewing masters made the masks comfortable, good-looking and effective. Meanwhile, Klevickis, Alvord and other volunteers set up mask give-away stations in front of various grocery stores. They gave away 600 on the first day. At following events and during porch deliveries, volunteers gave out another 5,400.

Even with all the focus on face masks, the volunteer force didn’t slow down its other efforts. In May, it donated 13 laptops to graduating high school seniors and families in need. For Alvord, this was just another sign that people in his city refused to let the pandemic break their will.

“We’re getting stronger, we’re a community that will survive this,” he said. “I’ve had the best view of this whole thing behind the scenes, and it’s just so uplifting and amazing what people have been doing.”

Jean and Bruce, whose last name is being withheld for medical privacy, agree with the councilman. The couple, both in their late 70s, live in north Roseville. Their age and Bruce’s compromised immune system put them in the highest risk category for COVID-19. When the outbreak started, Jean said she was at her wits end when it came to getting simple cleaning supplies without risking the couple’s health. After she contacted the community volunteer force, a care package arrived with tissue, face masks, disinfectant wipes and sanitizer spray.

“We were really and truly afraid to go to the store, and there were many things I just couldn’t get,” Jean remembered. “When I saw what they brought, it just touched my heart.”

Members of the volunteer force continued shopping for Jean and Bruce in the following weeks.

“I can’t tell you what it means to know that people would take the time from their busy schedules to do this for others,” Jean said. “I’ve decided that when things get better, I’m going to do some kind of volunteering in Roseville, myself. I will pay it forward.”

Be the first to comment on "During pandemic, suburban city finds its inner force"