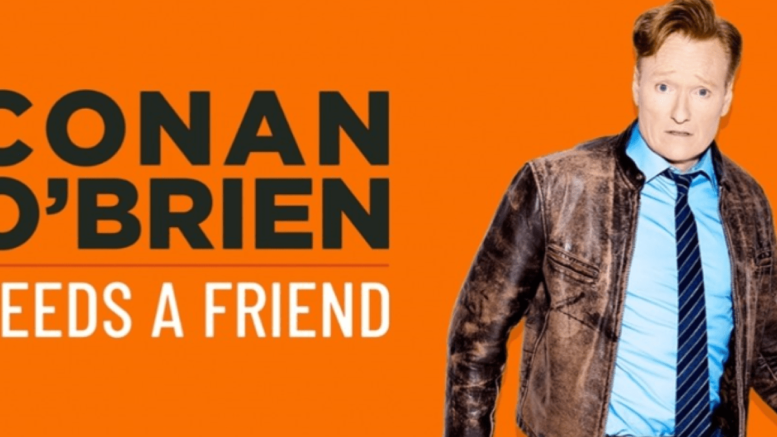 The late-night master of silly is so lonely!

Listen: Conan O’Brien Needs a Friend
What: The prolific (and resilient) late-night staple guilts celebrities into being on his podcast
Who: Really? He’s 6-foot-4, sports an orange pompadour and has been on TV since the Clinton administration.
How: Earwolf, Stitcher, Apple or anywhere you reel in your pods.

I don’t know about you, but I’m having a real hard time watching or listening to anything profound right now. It’s like the pandemic and its bewildering spinoffs (Mutant coronavirus! Murder hornets! A discarded hot dog that somehow became president!) have drained my brain battery to its last, flickering dregs. As a result, podcasts I otherwise consider essential listening (This American Life, Radiolab, Reply All) are cluttering my queue while I binge the silly, zero-stakes interview show, Conan O’Brien Needs a Friend. The Earwolf-produced pod features the eponymous host interviewing a celebrity he wants to hang out with while his longtime assistant Sona Movsesian and producer Matt Gourley listen and chime in. That’s it. That’s all it is. And it is everything I need right now.

The series premiered November 2018 as a larky side hustle for the late-night television host, but I started streaming it about a month ago, after the stay-home orders went out. What timing.

After almost 30 years in late night TV, this might be O’Brien at his most distilled: Freed from the commercial constructs of his TBS show, he indulges his free-associating imagination with the abandon of a child mainlining Pixy Stix powder. The sweetly back-talking Movsesian and dryly put-upon Gourley make great mom-and-stepdad foils, and their faux exasperation with their faux egomaniac boss will induce giggle fits. There simply isn’t another podcast that makes me laugh this hard this often. If that old adage about laughter being the best medicine is remotely true, then Conan & Friends are doing their part to get us through this crappy time. —Raheem Hosseini

Watch: The Last O.G.
What: Tracy Morgan plays a fish-out-of-water ex-con in a comedy with depth.
Who: Creators John Carcieri, Jordan Peele
How: TBS, Netflix

In The Last O.G., a Brooklyn crack dealer named Tray (Tracy Morgan) returns to his old stomping grounds after 15 years in prison to discover his ex-girlfriend is now a successful designer with a woke white-dude husband and a cozy brownstone. Oh, and Brooklyn is hella gentrified.

The TBS comedy, produced by Jordan Peele and co-starring Tiffany Haddish, is a nifty vehicle for its raw comedian, allowing Morgan to bust your gut with his big, broad rants while lacing in nuanced commentary about race, socioeconomics and the criminal justice system. (Name me another series that spends this much time in a halfway house—run by Cedric the Entertainer, no less.) Now in its third season, the series follows Tray’s journey to become a successful chef and continue bonding with the twin children who grew up while he was incarcerated. The end result is like one of Tray’s jailhouse recipes—a tasty treat made up of sneakily smart ingredients. —Steph Rodriguez

Read: Conspiracy: Peter Thiel, Hulk Hogan, Gawker and the Anatomy of Intrigue
What: A nonfiction book about a billionaire’s real-life conspiracy to destroy Gawker Media
Who: Author Ryan Holiday
How: Wherever books are sold

If you’ve wondered how the psychic slime of Tiger King became America’s preferred comfort food during the worst crisis in 80 years, then Sacramento’s own Ryan Holiday may offer some clues. His 2018 nonfiction page-turner, Conspiracy: Peter Thiel, Hulk Hogan, Gawker and the Anatomy of Intrigue, charts how one media company destroyed reputations and indulged online readers’ basest impulses under the banner of free speech.

But when Gawker owner Nick Denton and his crew chose to out tech investor Peter Thiel as gay, they unwittingly summoned the destroyer of their world. Conspiracy takes readers deep inside Thiel’s nine-year quest to settle the score, which culminates when he anonymously comes to the rescue of a down-and-out Hulk Hogan. (Gawker had published a stolen, secretly recorded sex tape of the wrestling legend, causing a chain of events that drove Hogan to contemplate suicide).

Regardless of how one feels about Thiel’s libertarian politics or his interest in the military strategies of Machiavelli and Sun Tzu, Conspiracy is an engrossing dive into his cloaked campaign. It’s also the tale of Denton, a stubborn, reckless millionaire who has no clue that an aggrieved billionaire is coming at him. For Gawker fans, the book’s a postmortem. For everyone else, it’s a taste of payback at its finest. —Scott Thomas Anderson

Miss sitting in the stands and watching a good old-fashioned ball game? Remember when murder hornets weren’t the alpha nuisance? Consider watching this YouTube clip, in which a swarm of bees takes over a baseball game between Colorado and Arizona. It opens with a gentle hum, as two commentators point out some nondescript “bugs” heading toward home plate. Suddenly, the noise intensifies and ball players everywhere instinctively drop to the ground. What follows is a scene that will shock and amaze you. Come for the video, stay for the comments from users such as Christopher or Chris/Critter C: “i hate when i got bee chasing me on the feild as an umpire, i can’t run away to far.” Or user James Kellogg: “Bees interrupt a baseball game, I’d RUN LIKE HELL!”

Keith Lowell Jensen brings the joy in his new podcast

Alienate your friends in ‘Five Songs or Less’