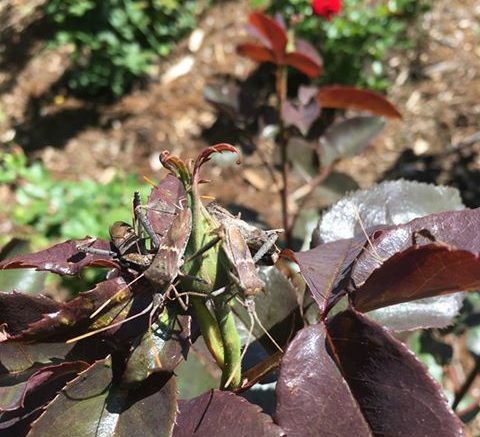 Leaf-footed bugs tend to hang out in groups, which make them easier to catch. (Photo courtesy of Sacramento Digs Gardening)

Even without “murder hornets,” Sacramento gardeners need to watch out for destructive insects

“Murder hornets” may be getting all the buzz, but two other menacing insects are attacking Sacramento gardens.

Enjoying a warm spring, leaf-footed bugs and hoplia beetles are out in force, eating roses and spring fruit. Both can be voracious and destructive, but are a lot easier to deal with than invading giant Japanese wasps. These pests can be controlled with a bucket of soapy water.

Looking like little space aliens, leaf-footed bugs are out early due to the mild winter. When not killed by cold, the adults usually hide out in tall grasses, wood piles or other protected spaces. As temperatures rise, they come out and start laying eggs.

Those eggs will become the second generation of leaf-footed bugs, sucking the life out of early tomatoes and peaches. When we see so many adults in April, June and July could be especially bad.

With distinctive leaf-shaped back legs, the leaf-footed bug is a real stinker; they are closely related to stink bugs. They stab long mouth parts into nice juicy fruit, flower buds, seeds and other favorite targets, then suck out the moisture.

Usually found in clusters, the young nymphs seem to appear out of nowhere, climbing over ripening fruit or rosebuds to look for just the right spot to dine. They quickly get big and scary looking; adults measure more than an inch tall.

Three different species are native to California and they attack a wide range of crops and ornamental plants. The most common in Sacramento is Leptoglossus zonatus. Fortunately, damage often is only cosmetic.

In home gardens, they primarily attack tomatoes, pomegranates and roses. They also have a huge appetite for almonds, pistachios, citrus and watermelon. But L. zonatus is opportunistic, eating lots of different fruit, vegetables, nuts and flowers.

Leaf-footed bugs tend to hang out and breed in weedy areas (they love thistles) before moving into the tomato patch. That’s another reason to keep weeds down.

Knock them off into a bucket of water, and add a teaspoon of liquid detergent to the water to assure a quick demise. No pesticides are necessary. But wear gloves; if touched, these bugs will make your hands stink.

Leaf-footed bugs can produce multiple generations each summer, so more nymphs may pop up at any time after May. One overwintering adult can lay as many as 200 eggs in April and early May. The eggs take a week to hatch, but then the flightless nymphs hang around for six to eight weeks.

Hoplia beetles, by contrast, only have one generation a year. That’s also a key to controlling them. They’re only active right now. By the end of May, they’ll have disappeared.

This pest loves light-colored roses, especially white, yellow, apricot or light pink. It chews round holes in the petals as it works its way to the tasty center. It likes the unopened buds, too. But it doesn’t eat rose leaves, just the flowers.

According to UC Cooperative Extension master gardeners, hoplia beetles also feed on the flowers of calla, citrus, irises, lilies, magnolia, olive, peonies, poppies and strawberries, and on the young leaves and fruit of almonds, grapes and peaches.

In other words, these beetles are hungry, destructive pests.

Members of the monkey beetle family, hoplias are common in the Sacramento area from late March through May, depending on the weather. The adults are brown, oval and about 1/4-inch long.

The adult beetles can fly, which is how they made it to your roses. They spend the winter in the larval or pupal stage underground in undisturbed areas, feeding on roots and decaying vegetation. They emerge from the soil as adult beetles with an appetite. After feeding for several weeks, they fly back to their nesting site to lay eggs.

Because the beetle tunnels into the bloom, chemical pesticides are not effective, or necessary. Pesticides have to come in direct contact with the beetle to kill it. In addition, systemic insecticides aren’t effective because concentrations of the poison in the plant’s petals aren’t high enough.

When you see a rose or other flower with hoplias, cut off the whole bloom, drop it in a plastic bag, seal and dispose of it.

Or use the bucket method again: Fill a 5-gallon bucket with soapy water. Then, shake flowers suspected of containing beetles over the bucket. The beetles will fall in and drown.

The other solution? Stick to red roses; hoplias don’t like red.

Perk up your garden