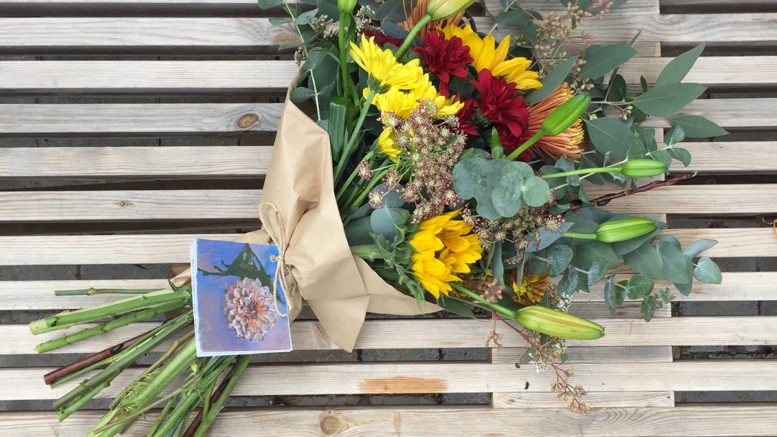 Amanda Kitaura of Bloom produces bouquets, mostly from her Sacramento backyard, for her subscribers. (Photo courtesy of Bloom)

For Amanda Kitaura, it started with a bag of dahlia tubers from Costco.

“I’ve always loved flowers,” she said. “I put those dahlias in the yard and it was the best thing ever! I wanted to do something more. That’s when I decided to be a flower farmer.”

This is American Flowers Week, a celebration of American-grown flowers and the farmers—like Kitaura—who produce them.

Author Debra Prinzing, who lives outside Seattle and is the mother of the “Slow Flowers” movement, created this week in 2015 to draw attention to attempts to bring back commercial flower farming to the United States. About 80 percent of all flowers sold in the U.S. are grown overseas.

“I get asked this question often: Why should I care where my flowers come from?” Prinzing said. “The parallels between the Slow Food movement and the Slow Flowers movement are obvious. When we know where, who and how flowers are grown, we vote with our pocketbook.”

A natural in the Farm-to-Fork Capital, this movement goes field (or sometimes backyard) to vase.

“What I find really exciting is the amazing diversification, especially in small-cut flower farms, including those in the Sacramento Valley, who are growing unusual and heirloom annual varieties of cut flowers from ageratum to zinnias, highly-valued garden roses for the floral marketplace, and flowers that the home gardener might never try growing, such as lisianthus,” Prinzing said.

Kitaura, 31, is one of a growing number of Sacramento area gardeners who turned their hobby into a business. She packed the planters in her Pocket/Greenhaven backyard with more dahlias, plus zinnias, sunflowers, strawflowers, lisianthus and other fast-growing blooms. She also enlisted the help of friends and family, borrowing space to grow more flowers.

“I have a suburban farm,” explained Kitaura, a former speech therapist. “I grow at four homes. We’re small; I don’t have acres and acres. … It’s small space but high density, as much as I can fit.”

“They look like they came out of someone’s garden, because they did,” Kitaura said.

When she needs more flowers to fill her orders, Kitaura buys them from other local flower farmers.

Slow Flowers also are catching on with traditional florists.

“Support the American grower; that’s the biggest reason,” said Jim Relles of Relles Florist in Sacramento. “You also can get different varieties of flowers. Certain flowers don’t travel well at all.”

Among those fragile flowers are such favorites as iris, gerbera daisies, larkspur, delphiniums, stock, tulips and some lilies.

Be the first to comment on "Field to vase"