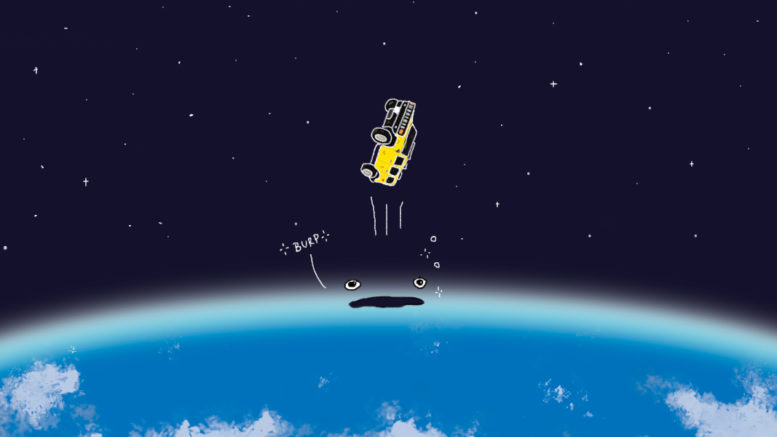 The coronavirus shutdown is helping Earth get some nasty stuff out of its system, but we’ll need to do more to avoid catastrophe. (Illustration by Rachel Mayfield)

The new coronavirus causes a nasty respiratory illness that attacks the lungs, but there is someone who is getting to momentarily catch her breath: Mama Earth.

The global health catastrophe has stalled broad swaths of human industry, leading the Center for International Climate Research and other climate experts to forecast a 5.5% to 5.7% dip in carbon dioxide emissions this year—or roughly 6 billion tons, give or take.

UC Davis environmental science professor Daniel Sperling estimated earlier this month that California’s stay-home order meant people are driving at least half as much as they used to, which would amount to a 12% drop in statewide emissions.

“[I]t might be even more,” Sperling, founding director of the Institute of Transportation Studies, wrote in an April 6 email, before more recent projections showed even sharper reductions in transportation.

A historic decline in oil consumption sent petroleum prices spiraling into negative territory last week, with at least one Sacramento gas station selling the black crude for $1.97 a gallon, according to GasBuddy.

“As a result, the coronavirus crisis could trigger the largest ever annual fall in CO2 emissions in 2020, more than during any previous economic crisis or period of war,” Carbon Brief, a United Kingdom-based website focused on climate science, reported on April 15.

As clean as the air might momentarily be, this unplanned and involuntary work stoppage won’t be enough to save Earth.

Emissions need to fall by 7.6% each year until 2030 if we have a hope of limiting global warming to 1.5 degrees Celsius by the year 2100, United Nations Environment Programme executive director Inger Andersen wrote in the foreword to last year’s Emissions Gap Report.

The 1.5 C threshold would ensure that at least some aquatic life survived our acidifying oceans by next century, though rising sea levels, extreme weather events and drought-ravaged ecosystems would still likely cause massive migrations and die-offs of people and other species.

Without drastic, permanent reductions in greenhouse gas emissions, some of us may live just long enough to experience an uninhabitable planet, the U.N.’s Intergovernmental Panel on Climate Change warned in its 2018 special report.

Despite the IPCC’s wake-up call, greenhouse gas emissions rose to new records last year thanks, in part, to the Trump administration’s rollback of environmental regulations. Not only that, but the head of the World Meteorological Organization predicted just in time for Earth Day’s 50th anniversary on April 22 a return to our poison-pumping normal once the COVID-19 threat is over, the U.N. reported last week.

“There might even be a boost in emissions because some of the industries have been stopped,” said WMO Secretary-General Petteri Taalas.

But humankind doesn’t have to return to a suicidal environmental stance once the lockdowns end. What happens after the pandemic is a question UC Davis’ Institute of Transportation Studies is actively researching, said Giovanni Circella, director of the 3 Revolutions Future Mobility Program at the university.

Whether people travel in the same ways after the crisis depends on many different variables. For instance, Circella noted, people may be more reluctant to use public transportation because of a lingering fear of viruses, and be more habituated to telecommuting and shopping online.

Changes to the airline and retail industries and land-use policies are also either possible.

“How the future might look like after the crisis is very uncertain,” Circella wrote in an April 7 email. “The reduction in travel will give the planet some time to breath, but most of the longer-term impacts are unknown at the moment and will likely depend on the policies that are deployed.”

So, if you’re in dire need for silver linings, consider that this terrible plague may have cracked the smallest of windows. Whether we actually squeeze through it depends on people doing something they’re not so good at—thinking beyond tomorrow.