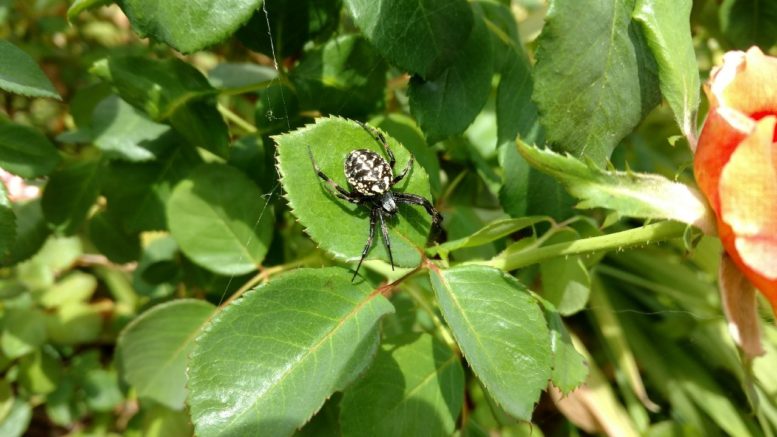 This golden orbweaver spider creates a giant web as wide as a double front door. (Photo by Debbie Arrington)

I had to admire her industriousness, even if the results made me scream.

Spanning the width of our double front door each morning was a humongous spider web, easily six feet across and just as tall. Sitting right in the middle at my eye level was its creator: A giant black spider with yellow markings.

Each morning, her impressive web got knocked down (usually with a broom). Each night, this spider spun another.

Then, I noticed: She was not alone. Equally large spiders were creating their own wide webs between rose bushes in the front yard. Each web looked big enough to snare a trick-or-treater.

Who needs Halloween props when your garden is full of spiders?

Their presence actually is a good thing. Spiders are natural pest control; they eat lots of bugs.

My front-door spider, who got nicknamed Charlotte (as in the children’s book), is a golden orbweaver, a common garden spider known for its over-sized concentric webs. Harmless to people, this particular variety is fond of large rose bushes, such as those growing on either side of my doorstep.

“They like to hide out under leaves on the rose bush during the day,” explained Baldo Villegas, Sacramento’s “Bug Man.” “That’s where it’s nice and cool.”

The retired state entomologist has encountered many, many spiders. In Sacramento, we only need to worry about widows, which have a venomous bite.

“In the Sacramento area, the black widow spiders are the most dangerous as they are very common,” Villegas said. “Next would be the brown widows, but they are much less common.”

Widows tend to be found outdoors or in garages in dark, dry, seldom disturbed places. Brown recluses and hobo spiders, two other species that can hurt people, are not found in California.

“All spiders are predacious on other critters, especially insects, and they are considered beneficial critters of the garden,” Villegas explained. “Most all spiders in our area are harmless to humans or pets. The only problem is when the spiders are grabbed or trapped by human hands! Then is when they can bite.”

Evolution likely programmed people to be scared of spiders. Arachnophobia, a fear of spiders, became part of our survival instinct.

As for Halloween, spiders have been connected to witches since medieval times. Several species hang out in dark and spooky places, adding to spiders’ creepy reputation.

But in ancient folklore, spiders are an omen of good fortune. They just look scary.

“However, one has to be careful reaching into darkened or protected areas where the widow spiders make their webs,” Villegas said. “Also, one has to realize that some of the large garden or orb spiders construct huge webs that in my garden cover the walkways. If one wanders in the garden and accidentally runs into these huge webs, the experience can be very scary.”

Believe me, I know.

From SN&R’s president: It could be the end