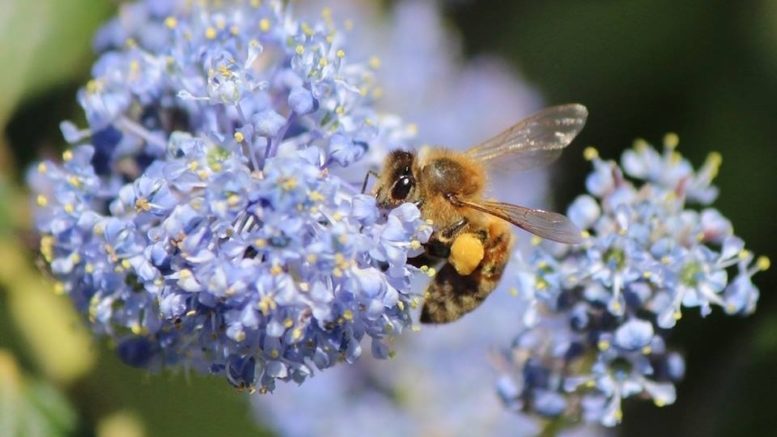 Honey bees aren’t the only ones at risk. So is their Yolo County haven.

Officially named the Haagen-Dazs Honey Bee Haven, this buzzing sanctuary on the UC Davis campus is facing a funding crunch. Known on campus simply as The Haven, it needs to raise at least $15,000 to continue to offer its bee-friendly tours and classes through the end of the year.

“It’s an ongoing concern,” said Christine Casey, who manages The Haven. “We have no dedicated source of funding. It’s a little puzzling. At this point, over $1 million has been invested in this garden.”

Most of that money came from sources other than its original benefactor, ice cream maker Haagen-Dazs. It donated the initial $125,000 to establish this pollinator garden, which opened in 2009 on west campus next to the Laidlaw Honey Bee Research Facility. The company also chipped in some money used for salaries.

“It’s been more than five years since we’ve had any contact with them,” Casey said. “We’re still calling it ‘Haagen-Dazs’ in absence of anything else. But it leads a lot of people to assume we’re supported by them.”

Instead, Casey cobbles together grant money and small donations to keep the gates open.

Thousands of visitors each year drop by The Haven to see the bees and the garden they love; admission is free. Feeding about 80 different species of bees, about 260 different kinds of flowering plants grow on the half acre. It’s a wonderful resource for anyone interested in creating their own pollinator garden.

“Part of our challenge, our primary mission is education,” Casey said. “There aren’t many grants for education in gardening.”

Colony Collapse Disorder, which killed billions of honey bees, is what originally prompted The Haven’s creation. In 2008, an estimated 60 percent of hives nationwide were lost to this mysterious malady.

“Honey bees still have issues, but it’s the native bees that are of much more concern at the moment,” Casey said. “Honey bees are essentially managed livestock; native bees live pretty much solitary lives.”

Native bees are threatened by development because about 70% nest underground. “A housing development comes in—who knows how many nests are destroyed?” she said.

Adding insult to an already tough situation, someone recently broke into The Haven’s office and stole about $700 in donations and equipment, including power cords, a battery charger, volunteers’ hats and gloves and even the wheels off a hose cart.

“They pried open the lock on the door with a crowbar,” Casey said. “They really went through everything.”

To help out, the Sacramento Area Beekeepers Association launched a GoFundMe page for The Haven. Other donations of materials as well as cash have started to come in.

Casey plans more fundraising, including an open house Sept. 21. She’s optimistic that The Haven can continue to be a welcoming home to bees.

“This is such a unique resource,” she said. “We’re actually getting more visitors every year. That’s what’s frustrating; we’re growing.”

Be the first to comment on "A haven no more?"