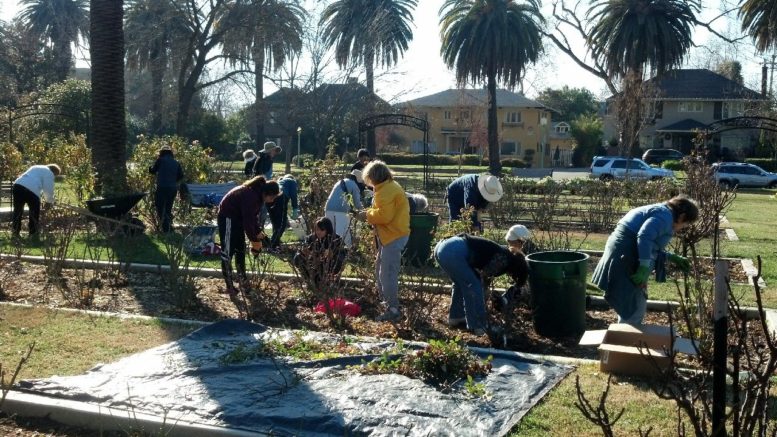 Conditions were sunny but chilly for the 2014 McKinley Park Prune-a-thon. After a soggy 2019 pruning day, dry weather is forecast for the 2020 renewal. (Photo by Debbie Arrington)

Rain can’t keep rose lovers out of this garden.

The first Saturday of each year, the McKinley Park Memorial Rose Garden hosts its annual Prune-a-thon. The goal: To finish pruning the garden’s 1,200 roses by noon.

Scheduled for 9 a.m. on Jan. 4, this event attracts scores of volunteers—experienced gardeners and newbies alike—who systematically reduce unruly bushes to neat and tidy bare canes, rejuvenating the roses for another spring of abundant blooms.

Last year’s Prune-a-thon looked like it was going to be a washout after a big storm was predicted. The morning saw a steady drizzle, but that didn’t dampen the enthusiasm of the 85 volunteers who showed up.

During the event, Dave Coop of the Sacramento Rose Society gave pruning lessons to newcomers. “All had good questions and were eager to learn,” he said. “Yes, it was wet and a bit breezy, but not intolerable. It even cleared slightly late in the morning.”

Despite the wet conditions, the job got done. “I was happy that we ignored the network weather reports that said this storm was going to ‘dump’ on us,” Coop said.

Volunteers should have more comfortable conditions this Saturday. According to the National Weather Service, there’s only a 10% chance of rain, with temperatures in the 50s.

In East Sacramento, the Prune-a-thon has become a New Year’s tradition as the garden community and McKinley Park neighborhood come together to nurture this beloved rose garden. Considered among Sacramento’s most romantic places and a popular setting for weddings, the rose garden was featured in the hit movie “Lady Bird.”

Friends of East Sacramento, which now oversees this public garden and Clunie Community Center, provides refreshments and lunch for volunteers. “We order minestrone soup and clam chowder from Evan’s Kitchen to feed all the volunteers when we’re done,” said Lyn Pitts, the garden’s coordinator. “Everyone is invited and there’s no age limit.”

Children and their parents are required to fill out a participation waiver, available by emailing friendsofeastsac@aol.com.

McKinley Park is in the midst of a two-year construction project to build a 6 million-gallon stormwater vault 22 feet underground. Expected to be completed later this year, the vault project has torn up much of the park. When the vault is finished, $1 million in upgrades, including a new multi-purpose turf field and benches, are scheduled for the park.

The rose garden is getting some sprucing up, too. Pitts and her volunteers recently spread around the roses 150 cubic yards of wood chips donated by Florin-Perkins Landscape Materials. Usually, her crew cuts back large sections of the garden before the Prune-a-thon. Afterwards, Pitts and other experts continue to work on the bushes, fine tuning the pruning and giving each bush a little extra TLC.

“We are behind schedule with the pruning,” Pitts said. “So January will be a very busy month catching up.”