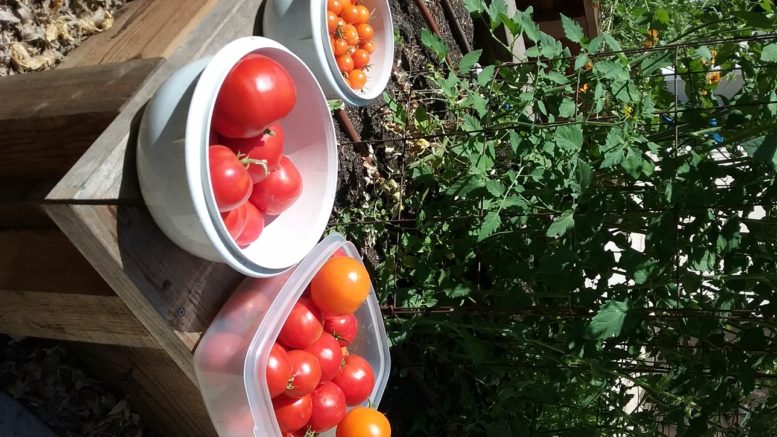 Farmer Fred Hoffman is harvesting plenty of tomatoes this fall, but some gardeners aren’t as fortunate. (Photo courtesy of Fred Hoffman)

It’s a mixed bag for growers of heirloom varieties

This was a tough summer in the Big Tomato. For many growers, Sacramento’s favorite crop struggled.

This lack of tomatoes left gardeners scratching their heads and farmers recalculating their yields.

A combination of weather conditions—too cold and wet early, too hot late—seemed to confuse plants. Instead of setting a steady supply of fruit, some tomato vines just sulked.

As of Aug. 24, tomato shipments were running 21.1% behind the 2018 pace, reports the Processing Tomato Advisory Board. Although farmers expect to pick up some slack in September, the total California processing tomato crop is forecast to be down 4.1% from last year.

Processing tomatoes—used for canned tomatoes and tomato paste—are supposed to be the easy ones to grow. If they’re having difficulty, what about heirlooms?

“This was not a good year for me,” said Peter Frichette, Sacramento’s homegrown tomato king. “Only one person that I have spoken with said that he had a good year. Most others just said that it seemed below average.”

Frichette, whose Greenhaven garden usually produces bushels of tomatoes, saw two of his usually reliable Early Girls shut down before they ever got going. A farmer friend “attributed this to a storm that occurred early on in the plants’ life that fooled them into thinking that it was already winter,” Frichette said.

Kitty Bolte planted a dozen varieties and got a wide range of results. “I had good luck with Amish Paste and the cherries,” she said. “Brandywines did terribly, [they] rotted before they ripened. San Marzanos were OK, but seemed more prone to blossom end rot than the Amish Paste. All the others were fun and flavorful, but not especially prolific.”

The difference between a bad and a decent crop seemed to come down to variety. Plants in the same garden bore vastly different harvests.

By contrast, Colene Rauh of Orangevale had a great tomato year. “By far, our favorite tomato—and it grew better than ever this year—is the Bull’s Heart,” she said. “Great for sauces, sandwiches, salads; you name it. As far as the cherry-type tomatoes, our other favorite is Sun Sugar; very prolific. One year, when we didn’t get a freeze, they grew into January!”

With our current mild fall weather, healthy tomato plants may keep going through the holidays.

“This will be a long tomato season,” noted radio host Farmer Fred Hoffman, who still has many green tomatoes in his Folsom garden. “I predict tomato salads at every Thanksgiving dinner table.”