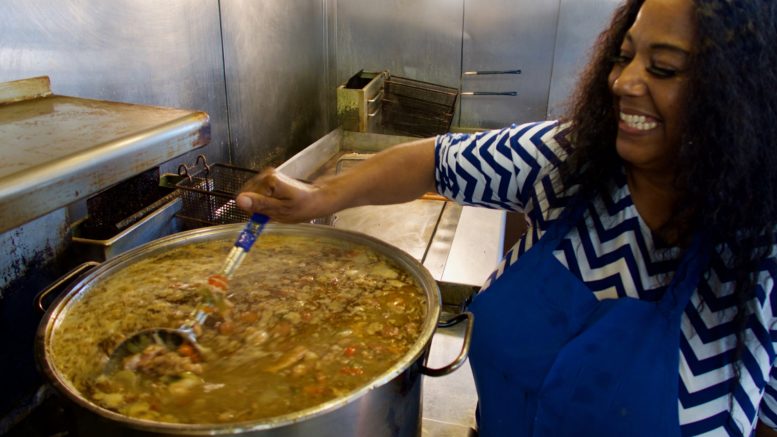 For nearly three centuries, gumbo has been warming mouths and spirits across Louisiana’s cultural kaleidoscope. Historically, it’s not considered California food, but thanks to the hands-down mastery Victoria Haggins has with the dish, this New Orleans staple is now offering Sacramantans a whole lot of transporting comfort—and showing them why gumbo is such a vital centerpiece in Gulf Coast traditions.

Haggins is the cook and creative eye behind Tori’s Place, a small, whipped-from-scratch food operation tucked away on Grand Avenue near Grant High School in Del Paso Heights. Since opening in 2013, Tori’s has become known as a hidden pearl of mouthwatering experiences: There’s the brass-colored bliss of its crispy-fried chicken. There’s succulent, Southern-touched catfish. Its collard greens and black-eyed peas also harken to the best touches of a Louisiana shrimp shack. But, as any fan of Tori’s Place can attest, it’s what Haggins does with gumbo that has built her cult following.

Gumbo first appeared in New Orleans in the early 1800s, with roots steeped in okra-infused stew and rice dishes from West Africa, beautifully complicated by inflections of French, Cajun and Choctaw Indian cooking. For Louisianans, finding one’s favorite gumbo to dig into every fall is a rite of passage, not to mention a unifying obsession for all walks of life.

For a long time, authentic gumbo in Sacramento was a pipe dream. That all changed when Haggins opened Tori’s Place—and got a pot bubbling with her flavorful juggernaut of juices and spices.

Initially, Haggins only planned to cook gumbo a few times a week. But customers need its comfort more often than that.

The reason is Haggins uses family recipes that she’s expanded over the years. Her gumbo is filled with shrimp, sausages, soft chicken bits and a perfect sprinkling of peppers, onions and okra. If that sounds easy to replicate, think again. There’s nothing simple about the sensational array of elements Higgins conjures in her gumbo. It has a savory sharpness that’s not overpowering. It has briny hints perfectly balanced against its pepper punch. And, if all that didn’t already make for hot comfort in bowl, she pairs the gumbo with spongy, slightly sweet, pan-seared cornbread pancakes. These cakes soak up the gumbo and offer even more naturally nuanced tastes to the experience.

Another warm element to eating gumbo at Tori’s Place is that Haggins and her staff greet customers like family. It’s not surprising. Haggins says her own family has been a huge influence on her cooking, which she’s been working at since she was 12.

“My Aunt Mattie was a huge inspiration to me,” Haggins says, stirring her gumbo. “Her and my father.”

As for what the secret is to her gumbo’s success, Haggins tends to talk philosophy rather than ingredients.

Be the first to comment on "A doorway to distant comfort"