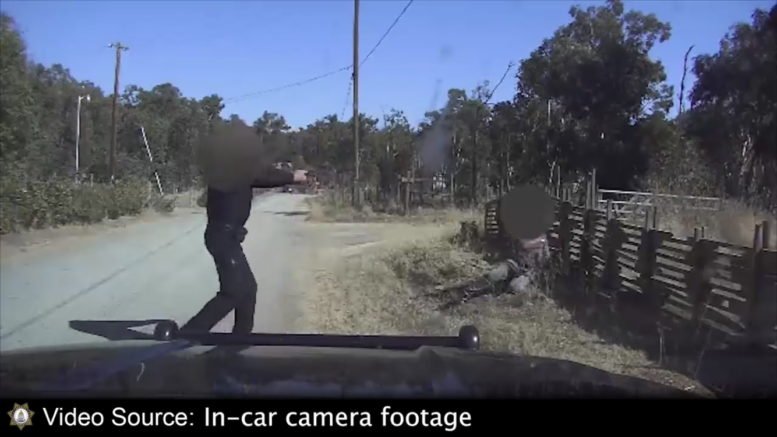 In-car camera footage captures the moment a Sacramento County sheriff's deputy begins shooting a man he believes to be reaching for a gun.

A solo deputy at the end of an overtime shift. A man with a realistic-looking BB gun. And a calm encounter that turned deadly.

A 55-year-old African-American man is dead after a Sacramento County sheriff’s deputy mistook a pellet gun in his waistband for a real one while responding to a disturbance in a remote rural neighborhood this month.

The department’s Homicide Bureau and Professional Standards Division is still investigating the fatal shooting that occurred Oct. 6, which began with two 911 calls regarding a man laying on the side of a country road in Herald, a small town in the county’s southern reaches. The Sheriff’s Department released video of the event on Oct. 16. The footage depicts a 19-year-veteran making a split-second decision at the end of an overtime shift and realizing he made the wrong call.

Maurice Holley was laying in a raggedy bed of sun-yellowed grass by a wooden fence on the side of dusty Bennett Road when the deputy’s in-car camera began recording that Sunday afternoon. It shows the deputy sidle into frame and ask why Holley is passed out in that spot.

Holley responds with what sounds like a dreamy non sequitur. “Oh I had my rabbit,” he says, one hand pinned against the soil for support and the other holding some papers.

The deputy writes Holley’s name and date of birth into a notepad. Holley then shifts onto all fours and groans. The deputy asks him to “sit back down on your butt for me.” Holley slow-crawls to the fence and leans against it.

“Maurice, you’re not listening very well,” the deputy says pleasantly. “You on parole, probation, anything like that?”

Suddenly, the deputy drops his pad and whips out his gun. He shouts at Holley to get on the ground. Holley holds his palms out and screams, “I didn’t do nuthin’!”

The deputy radios that Holley has a gun in his waistband. Holley’s left hand drops to his shirt hem. The deputy quick-fires nine rounds. Holley shrieks, twists, falls onto his left side, then rolls slowly onto his back into the ditch.

The deputy doesn’t lower his weapon. He pops a clip onto the ground and replaces it. He shouts, “Don’t move!”

Holley squirms. Holley stops squirming. The deputy carefully approaches and holsters his weapon. He takes Holley’s wrist, finds no pulse, handcuffs the body and back-steps to his car. Between gulps of air, he radios directions for the incoming units, which are several minutes away. In the briefing video that the Sheriff’s Department released, spokeswoman Sgt. Tess Deterding explained that deputies are sometimes on their own during calls to remote areas.

“It is not uncommon in the rural areas of the county for a solo deputy to make contact on a call of this nature,” she said.

The deputy reenters the frame, looks over the body and makes a discovery. “Fuck! BB gun!” he yells.

He repeats the expletive and crunches gravel back to his car. He swears again. Left in the frame is the dead man with his face blurred. The cop gets on his radio. He says, “It’s a fucking BB gun, Mike.”

Besides the one on the ground, investigators later find a second “Glock-style Airsoft gun” in Holley’s waistband, Deterding said.

A dozen minutes later, residents arrive off-screen. The deputy breaks the news that they won’t be allowed onto their street any time soon. What happened, a woman asks. “We just had an officer-involved shooting,” he tells her.

Holley doesn’t appear to be a big-timer. A couple of misdemeanor warrants, “no real history with us,” the deputy tells a colleague. He tells his fellow deputy the job now is to secure the scene, make sure his shell casings don’t get trampled and to interview everyone who lives on the street. More patrol cars arrive. Deputies ask their comrade how he’s doing. He downplays the trauma of what happened. “Left hand went [for] the gun, I just did what I did,” he tells one. He asks residents to keep their kids indoors.

According to the coroner’s office, Holley leaves behind two adult children, a son and a daughter.

“We are still in the early stages of this investigation, and our understanding of the facts and circumstances may change as we review more evidence and interview additional witnesses,” Capt. Jason Ramos said in the briefing video.

The Sacramento County District Attorney’s Office will review the Sheriff’s Department investigation into the shooting. Because the county hasn’t hired a new inspector general to replace the one Sheriff Scott Jones ousted last summer, it’s unlikely there will be an independent policy review of the incident.

They wanted to join the force. They died trying.

Sheriff in the shadows