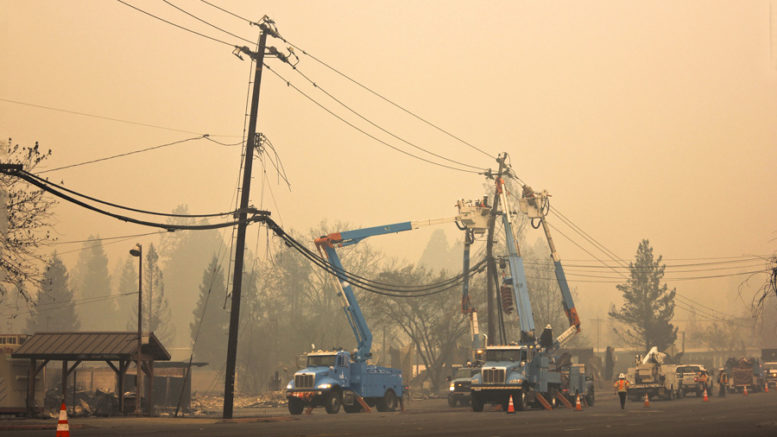 PG&E crews worked in Paradise on Nov. 9, the day after the Camp Fire began. (Photo by Melissa Daugherty)

The safety power shutoff is like a reality TV show

I am a reality TV junkie, mostly the shows like Naked and Afraid where people are dropped off to survive terrible experiences in a remote corner of the earth. So when the local power company decided to cut power to me and thousands of others, I began my own odyssey into an alternate reality. Some events were inescapable, while others I manipulated through my imagination and actions.

The night before, I left my car parked in the driveway. No way was I lifting the garage door open. Waking up, I knew right away the threatened shutoff had happened. My night light was out. The land line phones didn’t work, and I don’t have a smartphone. I was stuck and marooned in my virtual reality show.

Day One had its own mission: eat a giant bowl of turkey salad before it went bad. I had studied and was duly armed with a five-page printout of what food goes bad and when.

As the sky darkened, I had no internet and no light. It had always astonished me—how survivalists on reality shows cracked and quit when faced with the real thing. Now, I could see why.

In bed at 7 p.m., I read by flashlight and candlelight. After I couldn’t read another word, I sat propped up in bed, watching the candles. The flicker of the flames was relaxing. I was a hippie again.

The next morning, I awoke the exact moment I always get up, despite no alarm. I had made it through Night One. My second lesson that morning was in understanding what drives most of us—habit. My cup of tea, the gym, sitting down to write, hearing from friends. Nothing was working: the sprinklers, the clocks, the fridge, air conditioning, Wi-Fi. I wasn’t naked or afraid, but instead I felt time and life slowing down.

After breakfast, I decided on a trek, like those in survivalist shows. I had begun to worry about the loss of food in the freezer. I recalled how reality show participants ate grubs, snakes, mice, rats and moose. Thankfully I had no way of cooking them. At the little bridge over our man-made neighborhood lake, I gazed down at some fish. But without a grill, I kept walking.

In our neighborhood, a driveway social had been planned for that night. Was it still on? I bravely knocked at the door of the family hosting the event.

Realizing I had not spoken a word in the last day and a half, my voice sounded scratchy to my own ears when a woman answered the door. They, in turn, told of their experiences with the power shutoff. We bonded, strangers coming together over shared disruptions to everyday life, big and small.

That night just before dusk, there was a knock at my front door. The neighbors had brought me a hot meal in bento boxes, the nicest gesture that warmed my survivalist heart. Just like a reality show, this ended with astounding revelations about the moments that comprise our lives.

I am home, but still in a foreign land.

Be the first to comment on "Essay: Surviving the blackout"