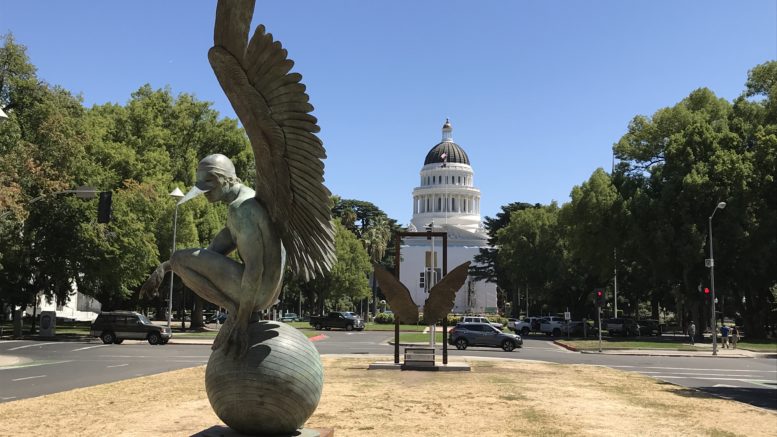 Capitol Mall could look very different if a revitalization plan is funded and built. (Photo by Foon Rhee)

How much is a Capitol Mall makeover worth?

The stretch of Capitol Mall between Tower Bridge and the state Capitol is the closest thing Sacramento has to the grand boulevards of Europe.

But these days, the gateway is looking as tired and unkempt as the yellowed, sunburned grass in the median.

So to spruce it up, planners are looking at removing two of the four vehicle lanes and putting the remaining two in the middle. As shown on early concept drawings, that would create wide public areas with trees, landscaping, public art and retractable shade structures, plus a main stage.

“The goal is to improve walkability and activate the space,” Megan Johnson, manager of the city’s Capitol Mall Revitalization Project, wrote in an email.

Those are logical goals, so here’s the real question: How much is a Capitol Mall makeover worth?

A feasibility study estimated the construction cost at $16 million to $17 million, a very preliminary number. Whatever the final price tag, the city must still figure out where to get the money. Depending on environmental reviews and funding, construction could begin by 2023.

The next phase, set to start with the new year, calls for preliminary landscape architecture and engineering work, plus environmental approvals. City Hall will also be seeking broader input from the public, after having already reached out to bicycle and pedestrian advocacy groups, event organizers and area business and property owners.

To understand why there’s so much interest—and potential controversy—in this project, you have to know some Sacramento history.

Planners have had grand designs for more than a century for an avenue to rival those in other capital cities, including Pennsylvania Avenue in Washington, D.C., according to a history put together by PAR Environmental, a cultural resources consulting firm in Sacramento.

After World War II, cities across America redeveloped their centers. In Sacramento, Capitol Mall was the first “urban renewal” project. While it had broad support from business and civic groups, it meant demolishing a 15-square-block swath of the West End and displacing thousands of residents.

While many city leaders saw it as a slum, it was the city’s most diverse area and home to its Japantown. Residents, including some who were detained in internment camps during the war, spoke out against the project.

As chronicled by the Urban History Association, after voters rejected a $1.5 million bond issue, the Sacramento Redevelopment Agency successfully secured alternative financing from the Legislature. Demolition of the West End started in 1957, and ground was broken on the first major office building in 1959. In 1964, Capitol Mall won a national award for the best urban renewal project.

The current design was completed in 1965. Various revitalization ideas have been floated in recent years, but this is the most serious effort to date.

It may be past time for a makeover, but at what price?

Be the first to comment on "Editor’s note: A capital idea"