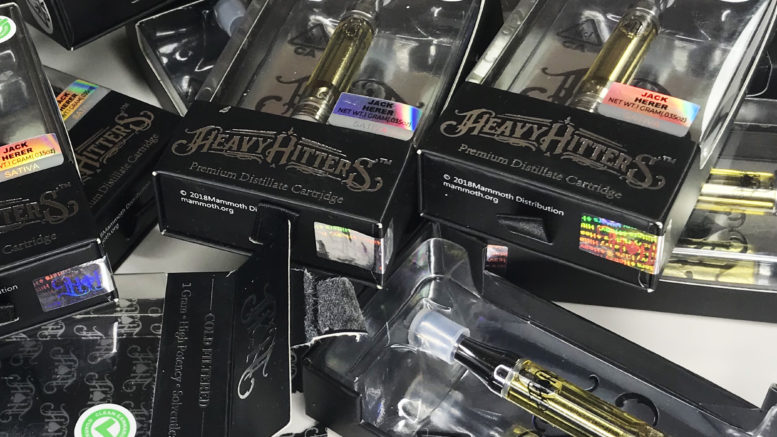 These Heavy Hitters’ “Jack Herer” vape cartridges were purchased at a local unregulated venue. Would you be able to spot the difference between counterfeit vapes and the real deal? (All photos by Ken Magri)

It has been a bad summer for vaping.
Across the country, young adults have been getting sick from vaping e-cigarette products, and the federal Centers for Disease Control and Prevention reported that an Illinois man died in August. Now, the Trump administration is even considering an all-out ban on flavored e-cigarettes.

But it’s not just e-cigarettes. Last month, residents of Hanford were hospitalized with respiratory issues after vaping unlicensed THC cartridges. Rolling Stone magazine reported on an 18-year old who was hospitalized on Long Island, N.Y. with an acute lung injury after vaping with California brand, TKO Extracts, that turned out to be a fake.

What’s more, on Monday Gov. Gavin Newsom announced an executive order to help curb the growing number of youth who vape. California is now the third state to take such action.

Further, the CDC reported 193 potential cases of vape-related illnesses in 22 states between June 28 and Aug. 22 and said that “in many cases patients have reported use of THC-containing products.”

What’s going on?
SN&R determined that part of the answer is linked to counterfeit cannabis vape cartridges, which are showing up in increasing numbers in California and beyond. Full-gram cartridges of popular brands can be purchased on the internet, at unlicensed dispensaries, through delivery services and also at pop-up “sesh” events for as little as $10, compared to licensed dispensary prices of $50 to 60, plus taxes, for an authentic cartridge.

“The issue of counterfeit products is seemingly becoming more and more of an issue every day,” said Alex Traverso, communications chief for the California Bureau of Cannabis Control. “These products are found in the illegal shops that we’ve shut down over the course of the last year. They look like the genuine article, but much like other products in illegal shops, have not gone through testing and pose risks to the health of the consumer.”

Untested cannabis vape cartridges can contain pesticides, solvents, molds and heavy metals. Each contaminant comes with its own health issues including respiratory problems and cancer.

“Much like the way licensed retailers are hurt by the presence of illegal shops,” Traverso said, “manufactured products from licensed companies are impacted by cheap knock-offs that cut into their business and damage their credibility.”

For licensed retailers, who jumped through all the bureaucratic hoops to comply with state regulations, the situation is frustrating.

“We have all worked hard to combat stereotypes and negative stigmas around cannabis,” said John Oram, CEO of Oakland-based NUG Cannabis, “and now the issue of counterfeit and contaminated products instills a new fear in the public eye.”

Counterfeiting has been reported, although not yet proven, for licensed California brand names including Alpine, Brass Knuckles, Cookies, Heavy-Hitters, Kingpen, Loudpack, Rove, Stiiizy and TKO.

“Yes, Alpine is aware that there are counterfeit vape cartridges being sold on DHGate.com,” said Sachin Gulaya, CEO of Alpine Vapor. “We have contacted DHGate several times with cease-and-desist letters to no avail. The packaging they are selling has been updated twice since then, with one being in response to counterfeiters.”

But counterfeiters catch on quickly, reproducing new packaging almost as fast as the changes appear. To mitigate that, Guyala said that Alpine Vapor relies on “a single domestic packaging supplier” and high-quality “propriety designs” that are hard to reproduce.

Frequent reports about counterfeit vape carts appear on Instagram accounts such as @dankbustersofficial and @theblacklistxyz, which are dedicated to educating cannabis users. Followers report suspicious counterfeit cartridges throughout California and as far away as Oklahoma, Texas, New Jersey and Florida.

There are other vape cartridge brands of concern, but they fit into a second category. These faux brands of dubious origin falsely represent themselves as licensed companies—but they’re not. They include Cali Carts, Dank, Exotic Extracts, Mario Carts, Smart Carts and West Coast Carts. Often packaged with cartoon-like graphics, they are untested and widely available through individual sellers.

Many of these brands were spotted at local unlicensed venues, such as “sesh” marketplaces. SN&R bought 10 full-gram cartridges of what was labeled as Southern California brand Heavy Hitters’ “Jack Herer” for $10 each.

Standing at a table stacked 2 feet high with brand-name carts, SN&R asked, “Are these authentic?” The vendor stared for a moment and then answered, “Yup.”

But were they?
SN&R sent the Heavy Hitters cartridges to Sacramento’s 2 River Labs, a state-licensed cannabis testing company, to test them for potency, pesticides, solvents and metals. Although the test results showed no solvents or metals, the samples failed for two banned pesticides: myclobutanil and bifenazate.

Myclobutanil, known by the brand names “Eagle 20” and “F-Stop,” is a popular fungicide for treating powdery mildew because it works in one application. Commonly used on table grapes, it is mildly toxic if ingested, but smoking it is another matter.

“When myclobutanil is heated up, it turns into toxic fumes like carbon monoxide and hydrogen cyanide,” said Julia Innocenzi, manager at 2 River Labs. “When we have had previous fails for myclobutanil, it was usually just above the limits. This particular sample tested at a fail rate of 16 times the amount.”

The cartridges tested for bifenazate at almost three times the allowed amount. The active ingredient in Floramite brand pesticide, it is used for killing spider mites, mostly for indoor grow operations, and recommended only for ornamental plants and non-bearing fruit trees. The European Food Safety Authority stated that it concluded farm workers applying bifenazate using hand sprayers were considered at risk.

The test results also reported the cartridges’ THC potency at 39.4%, less than half of the 87% listed on the package. According to Innocenzi, the label claim for potency on any package compared to lab data should only vary by 10 percentage points.

“It’s evidence of a cut,” said the operator of @theblacklistxyz, referring to cutting agents used to stretch out batch sizes.

Based on the lab results, the packaging, the $10 purchase price and the unlicensed point of purchase, these specific cartridges were almost certainly counterfeits.

“If these carts were actual compliance tests from a licensed distributor, they would have to be destroyed and not allowed to be released for sale to the public,” Innocenzi said.

Neither Heavy Hitters nor its distributor Mammoth Distribution responded to requests for comment.

SN&R also bought a $10 Kingpen “Cali-O” cartridge at the sesh market, then visited Sacramento’s NUG dispensary, which allowed us to photograph it next to an authentic version sold in stores. The two packages looked identical, but the Kingpen box listed a batch number that was inconsistent with Kingpen’s normal numbering sequence.

Without testing, there is not proof that the Kingpen cartridge was also a counterfeit, but it appears so. “I wouldn’t let a friend smoke that,” said NUG manager Shaina Pritchard.

These name-brand empties can also be purchased in Los Angeles retail stores, along with cutting agents, bottled terpenes and equipment used to make cannabis distillate, which is the THC oil that goes into a cartridge. Some new commercial distillate-making machines are the size of a walk-in closet, and cost more than $190,000, but they can produce distillate on an impressive scale.

Ryan is a 33-year old Sacramento resident who once manufactured counterfeit cartridges, and for legal purposes did not want SN&R to use his last name. He said there are manufacturing facilities in the Central Valley where 10 to 15 workers can fill as many as 15,000 fake cartridges per day.

The empty carts are filled with distillate, usually made from cannabis trimmings, and then manufactured terpenes are added. These liquid extracts mimic the taste and smell of famous strains such as OG Kush or Super Lemon Haze. A cutting agent is usually added to increase volume. Propylene glycol is sometimes added, to produce more vape smoke on the exhale.

Ryan said that his crew was delivering 50,000 pounds per week of excess trim to other illegal operations as well. “They were operating just like us, so who knows what they are putting into those carts in the end,” he said.

After a few months, realizing his boss wasn’t working toward complying with state regulations, Ryan said he went to work for a legal cannabis cultivator.

Ryan said he believes that some vape manufacturers sell their own product to unregulated vendors when a particular batch fails a lab test. “The chain of custody is not what it should be,” he said. “It’s bait-and-switch when you have extra [batches]. That’s one of the things they do.”

While Ryan presented no evidence to prove his claim, Peter Scheir, president of HoloShield Security Holograms, which makes tamper-evident security stickers, agreed that manipulation is possible through the supply chain. He compared it to selling real Levis pants via the gray market.

“Anything can be counterfeited,” Scheir said. He examined the security stickers on the Heavy Hitters’ cartridge boxes and found several tiny distinctions in type spacing, shadowing and quality, “although consumers would have a very difficult time discerning the difference.”

“They can use their own holograms and even QRs on gray-market goods, and the supply stream will know they are, in fact, real [not fakes], but just off-brand products sold at a lower cost,” Scheir said.

Do not buy vape cartridges from unregulated vendors. Consumers are much safer buying from a licensed dispensary, and can always ask to speak with the person who does the ordering.

Heavy Hitters has a similar list of sellers, and a page asking consumers to email information about counterfeits to: counterfeit@heavyhitters.co.

The state cannabis bureau suggests consumers go to the state’s new verification site, capotcheck.com, “to make sure they’re shopping at a licensed business.”

Finally, trust your instincts. If the product and the price seem too good to be true, they probably are.

“We realize that, while the price of purchasing cannabis at a licensed retailer might feel excessive in the moment,” said NUG’s John Oram, “in the long run it’s worth it to have high-quality, pure and safe products.”