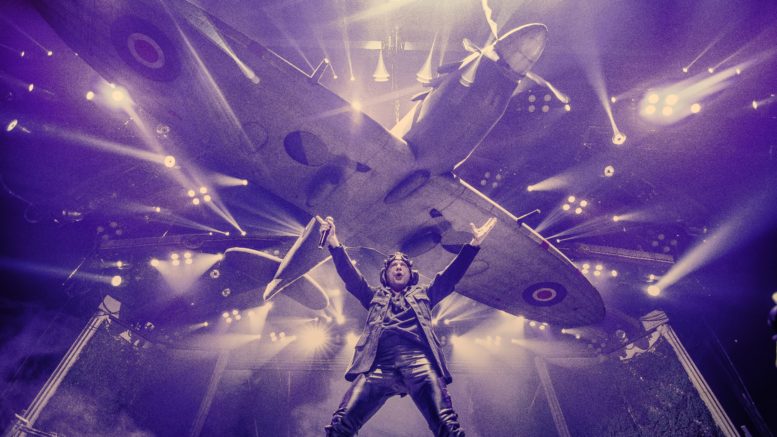 Iron Maiden stopped at the Golden 1 Center on Sept. 9. Did the band live up to the legacy of the beast?

The set begins with a blitzkrieg. Winston Churchill’s speech “We Shall Fight on the Beaches” precedes a wall of giant guitar harmonies as a mock World War II fighter jet tilts overhead. The song is “Aces High,” and onstage is Iron Maiden, the 40-year-old British heavy metal band that isn’t shy about its age.

“We are actually, genuinely old,” singer Bruce Dickinson told a packed Golden 1 Center crowd on Sept. 9. “You know how f—ing old we are? If you add up our combined ages, we predate the revolution of 1776 by around 100 f—ing years. We are older than the United States of America.”

Old enough to score a good review in Rolling Stone magazine, Dickinson added. The band made a Sacramento stop as part of its Legacy of the Beast tour, promising “no new songs” and a celebration of its once pioneering, still arena-packing weave of classically driven power metal, horror, world history and operatic theater. Bassist Steve Harris’ son’s band, The Raven Age, opened.

Zombie mascot Eddie is the band’s seventh member. During “The Trooper,” he arrived on stilts and a dozen feet tall, dressed in an American Revolution-era British military uniform and swinging a sword at band mates. Dickinson shooed him away with a blast of a musket-styled American flag, the fireworks spurring cheers from the audience.

Eddie transformed throughout the set, and so did the band’s visual orchestra. Depending on the song, he was an Egyptian pharaoh, an indigenous undead and, just before the encore, a titanic, inflatable demon breathing over the crowd. Dickinson swapped through costumes and props, brandishing a sword, donning a giant cross, then wielding a two-cannon flame thrower. Fireworks and pyrotechnics rung in the night with the 1982 hit, “Run to the Hills.”

In the lobby, diehard fans gathered in black Eddie T-shirts and black everything else, singing the praises of a band they’ve grown up with.

“There’s a history of Maiden in Sacramento,” said Deftones drummer Abe Cunningham, who was holding a beer. “They used play at Cal Expo when it was Bonney Field … I was weaned on Maiden, so any chance I get to take those dudes in is amazing.”

Eric Fiztgerald and his friend Bryan stumbled upon the show. Traveling from Massachusetts to catch a Metallica concert in San Francisco, they found out about the Sacramento show and extended their vacation.

They’ve been fans since they’re teenage years, and the passion hadn’t stopped.

On motherhood and country music