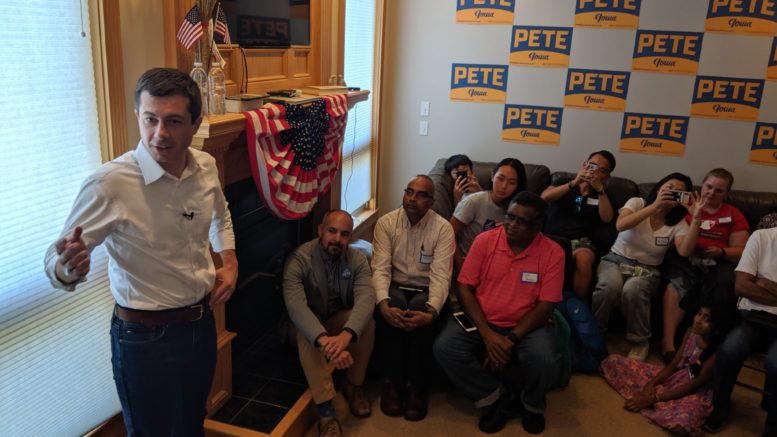 These days, Christopher Cabaldon has two jobs plus a side gig. He’s mayor of West Sacramento and on the faculty at Sacramento State. And when his schedule allows, he’s an enthusiastic campaigner for Democratic presidential candidate Pete Buttigieg.

When I talked to Cabaldon in mid-August, he had just returned from Iowa, which holds the first nominating contest next February. He squeezed in some campaign house parties in between tracing family roots and traveling with a U.S. Conference of Mayors delegation to a presidential forum on gun violence.

Cabaldon first met Buttigieg in 2015 at a U.S. Conference of Mayors meeting in San Francisco. The South Bend, Ind., mayor had just come out, right before the historic U.S. Supreme Court ruling that legalized gay marriage. Cabaldon, who announced he was gay in 2006, sought him out to offer whatever advice he could since being a gay elected official in the Midwest is more challenging than in California.

Since, Buttigieg has risen in the pack of 20-some Democratic candidates, and will be one of 10 contenders on the debate stage Thursday in Houston. But the 37-year-old Rhodes Scholar is still trying to break out of single digits in the polls—and still struggling to connect with African-American voters.

Cabaldon is not with the Buttigieg team in any official capacity, and said he doesn’t have time for regular campaigning.

Besides his new academic appointment, Cabaldon still has work to do in West Sacramento. He became the city’s first elected mayor in 2004 and has been re-elected every two years since. On his watch, his city has attracted attention for innovation and collaboration with its neighbors. In 2014, West Sacramento was named America’s “most livable” small city by the U.S. Conference of Mayors.

Cabaldon has raised his profile as well. He is chairman of the mayors’ jobs, education and workforce committee and was the subject of a flattering profile in Governing magazine in June.

The gay mayor of a smaller city on the rise who has national stature? Sounds familiar.

So I had to ask Cabaldon: Does it ever cross his mind that it could be him running for president and Buttigieg barnstorming on his behalf?

“No, not at all. Not for a second,” Cabaldon replied.

Mayors have more executive power and oversee more employees than a member of Congress. They know first-hand the daily challenges of real people. And they must help their residents find common ground.

“It’s clear right now a mayoral approach to governing is what is needed,” Cabaldon said.

And, he said, Buttigieg is not just any mayor. He also boasts foreign policy credentials with his military service, including six months active duty in Afghanistan. Buttigieg is vowing to pull nearly all U.S. forces out of Afghanistan in his first year in office, ending America’s longest war, nearly 18 years and counting.

“He’s the best the mayors of America have to offer,” Cabaldon said.

And, if somehow, Buttigieg is the one accepting the nomination at the Democratic National Convention next July in Milwaukee, Cabaldon could very well be on stage with him, under all the balloons and confetti.

Be the first to comment on "Editor’s note: The surrogate"