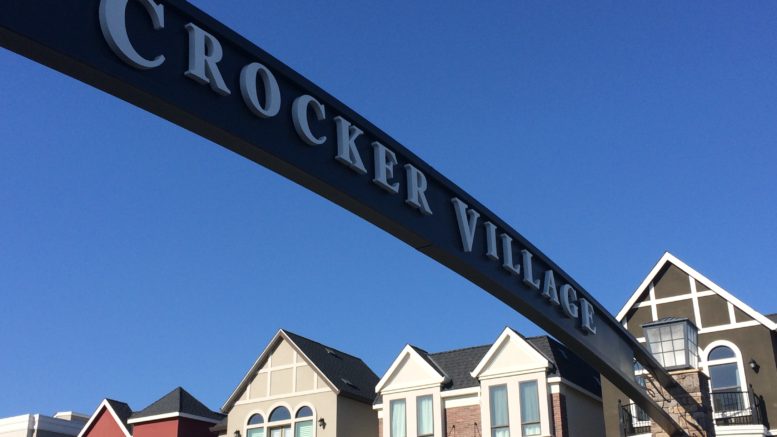 The name for a public park is the latest dispute at Crocker Village. (Photo by Foon Rhee)

Nothing is ever easy with developer Paul Petrovich’s project in Curtis Park. So why should the name for a little park in the middle of Crocker Village be any different?

As usual, this fight is full of murky accusations and has become very personal and very ugly.

Petrovich wanted to name the 3.5-acre park for his father, Alexander John Petrovich, who he says is a decorated World War II veteran who landed on D-Day and helped liberate the Dachau death camp.

But City Hall nixed that idea because Alexander Petrovich didn’t make the significant contribution to Sacramento required under city policy. Petrovich, however, blames Jay Schenirer, the city councilman who represents the neighborhood, for blocking the name.

Schenirer denies that and says the park naming is going through the normal process.

Petrovich then suggested naming the park for his family. “To do otherwise is simply an overt act of bias and a hateful act by a handful of people to inflict severe bias towards a family that has contributed so greatly to Sacramento and the region as a whole,” concludes an eight-page letter to the city listing all the charitable contributions the family has made and all the jobs it has created.

The city conducted an online survey, and nearly 1,600 votes—an unusually high number—were cast for 15 different names. So city staffers dug deeper and found that 210 votes for Petrovich Family Park came from a single IP address, which means they were cast on the same computer or network. Nearly 1,000 more came from IP addresses that voted 10 or more times.

That led to suspicions of attempted vote-rigging. John Cox, general counsel for Petrovich Development Co., denies any cheating. In an email, he said so many votes came in because of appreciation for the $170 million the company will eventually invest in Crocker Village.

The city decided to count only one vote for the same name from the same IP address. Removing duplicate votes still left 210 for Petrovich Family Park in the final tally on May 22, putting it in first place.

In second place with 88 votes is Donald Irving Rivett Park, to honor a Curtis Park resident who retired as a city parks supervisor and was active in local history groups before passing away in 2009. In third with 77 is Ray Eames Park, to recognize a native Sacramentan who was a pioneering artist and designer and who died in 1988.

These top three vote-getters go to the city’s Parks and Community Enrichment Commission, which is scheduled to debate the name on Aug. 1 so it can make a recommendation to the City Council.

Schenirer says he may recuse himself from voting. That’s probably a smart move, given past lawsuits.

Petrovich has been warring with Schenirer and some Sierra Curtis Neighborhood Association leaders for years on his project of housing and shops on 72 acres that used to be a Union Pacific railyard.

After the city approved the project, Petrovich proposed a 16-pump fuel station at the Safeway that anchors the neighborhood shopping center. Even after he threatened to bring in a discount grocer if he didn’t get his way, the council rejected the gas station in 2015.

Petrovich sued, and his lawyers uncovered emails and texts suggesting that Schenirer had colluded with neighborhood leaders. A judge ruled in January 2018 that Schenirer was biased and overturned the 2015 decision. The city is appealing that ruling.

Trying to mend fences, Schenirer posted a letter in March urging Curtis Park residents to welcome the new Crocker Village families. “They feel some of the animosity against the developer has shifted to them,” he wrote.

The dispute over the park name isn’t going to help.

LOVE your work! Keep the best of the best coming!!