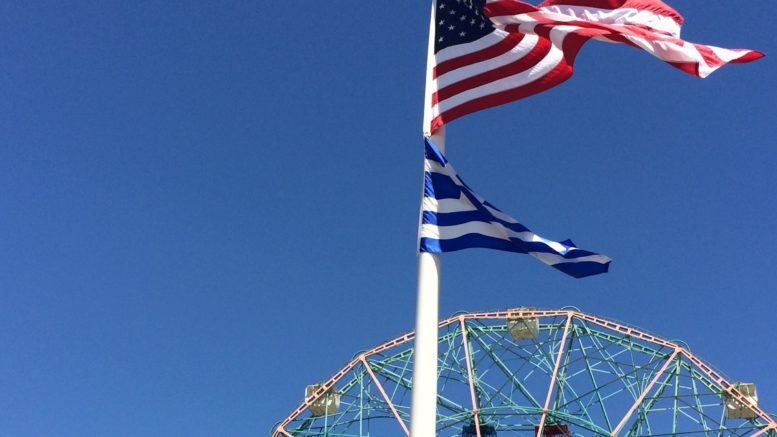 Coney Island is quintessentially American, especially for the Fourth of July. (Photo by Foon Rhee)

When I first arrived in America in 1972, I was in fourth grade at Frances Lacy Elementary in Raleigh, N.C. My classmates were somewhat confused by the first Asian most of them had ever met, a little boy with a British accent.

It didn’t take me long to feel American. I memorized the preamble to the Declaration of Independence and the words to “This Land Is Your Land.” I quickly became a fan of football, baseball and, especially, college basketball. I loved hamburgers and hot dogs and school cafeteria peanut butter cookies.

I went back to Korea for a year, in 1976, so I missed America’s bicentennial celebration, which I’m still disappointed about. I became a citizen in October 1982 while in college.

That’s the short version of my immigrant story.

We’re a nation of immigrants, and California has far more than any other state. Of the 43 million-plus people in the U.S. born in another country, about 11 million live in California. More than one-fourth of Californians were born abroad.

For me, the variety of those other places is always one of the highlights at citizenship ceremonies. The last one I covered, just before July Fourth in 2016, was especially for children. They came from Belarus, Fiji, India, Iraq, Nepal, Nigeria, the Philippines, Russia, Thailand and Ukraine. Another in 2012 at Travis Air Force Base was for service members who got their green cards by signing up for the military. They came from Haiti, Mexico, Nepal and the Philippines.

In public opinion surveys, immigrants are often more patriotic than native-born Americans. We know how special this nation is and how lucky we are to live here. Many immigrants try to give back and make America better. My path was to be a reporter and editor, to help inform the public.

So when President Donald Trump continually attacks the press as the “enemy of the people,” it hits close to home.

And as an immigrant, it infuriates and saddens me to see Trump—and his zealous “make America white again” adviser Stephen Miller—trying to slam the door on immigrants seeking a better life, refugees fleeing war and natural calamity and asylum seekers yearning for political and religious freedom.

“Our country is full,” Trump declared during an April 5 visit to the California-Mexico border. That’s a ridiculous statement, even for him.

Instead of the fair immigration and asylum reform we need, his administration has gone out of its way to be cruel, separating families and putting children in cages. On May 16, the president made a big deal out of presenting another heartless and pointless “plan” to limit legal immigration. A month later as he officially kicked off his reelection bid, he threatened to start deporting “millions” of illegal immigrants, though, as is so typical, Trump exaggerated. It turns out to be a limited ICE sweep in 10 cities of about 2,000 people—not criminals but merely under court order to be removed. Then, he delayed the raids for at least two weeks, until after July Fourth.

As we celebrate America’s 243rd birthday, I worry about the division and anger in our country that Trump is ginning up and the damage he has already done.

If he doesn’t get impeached and removed first, it’s clear that he will run an anti-immigrant, racist campaign for reelection. So it’s not an overstatement to say America as we know it—the nation symbolized by the Statue of Liberty—is at stake in 2020.

Thanks to the genius of our democracy, we’ll get to decide whether America is a nation of immigrants—or a nation of hate.

Cartoon: ‘It is what it is’

Be the first to comment on "Editor’s note: Coming to America"