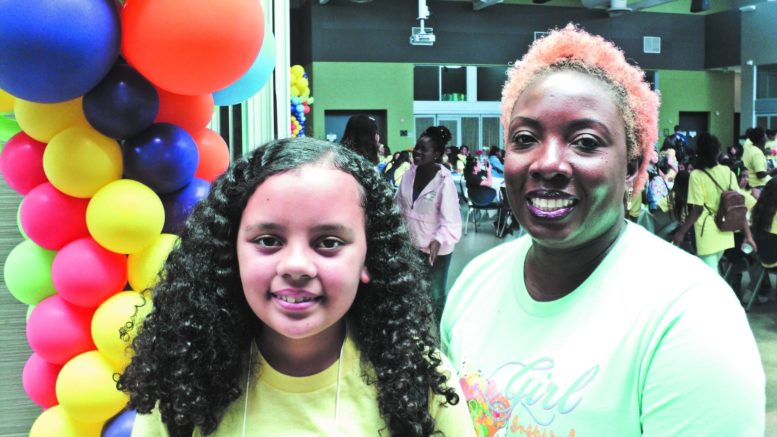 Amyah Davis (left) attended the Girl Inspired Conference days before she completed sixth grade at Pacific Elementary. “It was fun,” she said of the summit co-founded by Aliya Holmes (right). Photo by Edgar Sanchez

Days before she graduated from Pacific Elementary School in South Sacramento, 11-year-old Amyah Davis had a chance to hear successful women speak on important topics such as how to excel in life.

Among that advice: Follow her dreams, never give up, be herself and not forget her community.

The sixth grader also heard messages about the beauty of her character and that she has the power to change the world.

These words of encouragement came from the Girl Inspired Conference sponsored by the Sacramento City Unified School District (SCUSD) with the support of The California Endowment.

The day-long event, held at American River College, aims to promote female empowerment and sisterhood among girls of all ethnicities in grades six to eight in the SCUSD.

This year, the girls attended classroom workshops dealing with leadership development, college and career readiness, social justice and healthy lifestyles. Most of the workshops were conducted by nonprofit partners of the district.

“Our hope is that the girls walk away with something” that will help them reach their full potential, said conference co-founder Aliya Holmes, coordinator and liaison for SCUSD’s Foster Youth Services and Targeted Prevention/Intervention programs.

The conference was inspired by the Boys & Men of Color (BMOC) Summit, an annual event that in recent years has been held at Sacramento State University, to steer Sac City Unified boys toward excellence, and away from drugs, gangs and arrests.

The first Girl Inspired Conference, held in 2010, drew 50 middle school girls and it has steadily grown each year.

Reid, 18, also known as Virgo Gabrielle, told her audience: “In middle school, I was not popular. But my individuality has brought me to a point where I can express myself through my music. So, as you go through school, be yourself!”

Amyah, a member of Pacific Elementary’s Student Council, applauded.
“The conference was a lot of fun,” Amyah said, adding she learned lessons that will help her, starting with her transition to Fern Bacon Middle School next fall.

For more information about the Girl Inspired Conference or ways you can get involved, click “Learn more”.