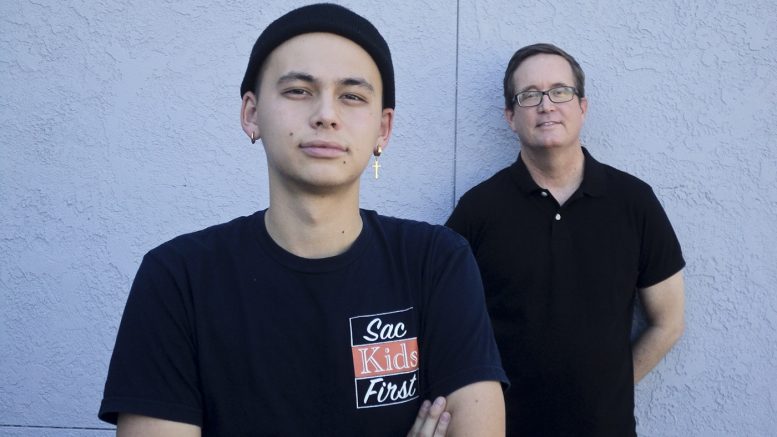 Three times in the past four years Dexter Niskala, 21, has campaigned for ballot measures that would have expanded Sacramento’s youth programs. All three were rejected by voters, the latest being Measure G in March. “I’ll do it again,” Niskala vowed, posing with Jim Keddy (right), main author of a report detailing why G lost. Photo by Edgar Sanchez

Sacramento, one of America’s most diverse urban areas, is fraught with racial and economic fault lines that make it a city of the haves and the have-nots, where race and income can determine how people vote.

That disquieting conclusion was reached by pro-youth activists recently, after probing into why Sacramentans rejected a March 3 ballot initiative that would have allowed more children of color to join local youth programs run by the city and nonprofits.

An analysis of the voting revealed that poorer neighborhoods such as Meadowview and Oak Park overwhelmingly supported Measure G, aimed at increasing graduation rates by keeping youngsters out of trouble. Wealthier neighborhoods, such as Land Park and East Sacramento, strongly opposed it.

Needing a simple majority of 50% plus one vote to win, Measure G drew 45% of voters’ support, even though it would not have raised taxes.

Measure G called for the City of Sacramento to allocate 2.5% of its general budget — about $12 million annually — to children/youth programs run by the city and nonprofits, with minority kids impacted by poverty, violence and trauma getting priority. The new funding, through the next 12 years, would have been in addition to the money Sacramento currently devotes to youth programs each fiscal year.

Dexter Niskala, a Sacramento State sophomore who campaigned for Measure G, was devastated.

“It was heartbreaking,” Niskala, 21, said of the measure’s demise. “I cried on the inside.”

Results of the analysis were released in May by Sac Kids First, a coalition of 24 organizations that collected 39,000 voter signatures to place Measure G on the ballot. Some coalition members, including Youth Forward, are financially supported by The California Endowment, which is prohibited from taking stands on ballot measures and legislative issues.

The 18-page post-election report, “A Tale of Two Cities: The Campaign for a Sacramento Children’s Fund,” was mainly written by Jim Keddy of Youth Forward.

“People of color who have read our report usually say it’s not surprising,” Keddy said. “White people … find it hard to accept.”

Measure G would have redirected city funding, which some saw as a move toward defunding of police — the words now shouted in nationwide Black Lives Matter protests after the May 25 murder of George Floyd by Minneapolis police.

“Measure G was an attempt to shift funding away from law enforcement toward youth and prevention,” Keddy said. “Police services take up the biggest percentage of the Sacramento city budget and the police union likely saw Measure G as a threat, which is why it contributed $31,000 to the opposition campaign.”

The battle over the measure intensified when Mayor Darrell Steinberg asked Sacramentans to vote against it. He promised a youth-programs counterproposal for the November election.

The mayor did not respond to a request for comment on the Tale of Two Cities report.