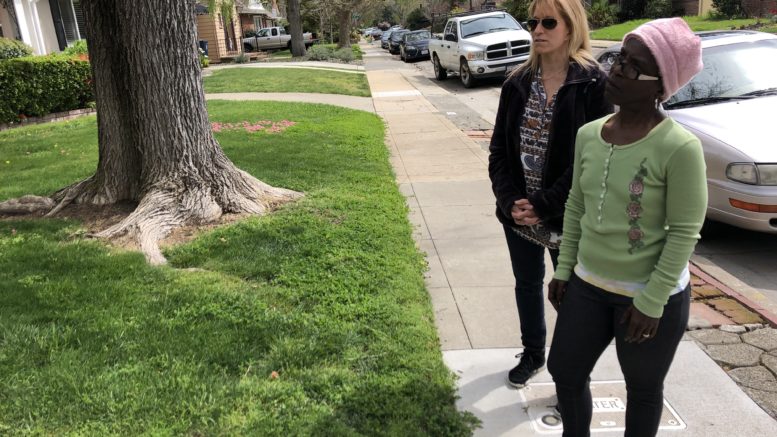 Pearl Callahan and Kristen DiAngelo stand at the edge of a cobblestone driveway flashing back to the night a vindictive pimp forced his way into their home and shot two of their friends.

The lies the two women told that night 40 years ago allowed the pimp to go free. Callahan and DiAngelo, who bonded as sex workers in Sacramento in the late 1970s, say they’re now ready to share what really happened at that house because California lawmakers have a chance to prevent it from happening again.

Senate Bill 233 is what has the two women talking. The bill would grant immunity to sex workers who are victims or witnesses of violent crimes. If approved, Callahan and DiAngelo say that workers would be able to help authorities catch the predators, exploiters and traffickers who escape justice because their victims fear prosecution.

“This is what happens when we can’t report,” DiAngelo said. “We become targets.”

The main goal of SB 233 is to encourage sex workers to report violent crimes such as rape or assault. Under the bill, sex workers who come forward would be granted immunity from prosecution on misdemeanor prostitution and drug charges. Because SB 233 deals with the evidence code, it needs support from two-thirds of the Legislature to move to the governor’s desk.

SB 233, authored by Democratic state Sen. Scott Wiener of San Francisco, cleared its first hurdle April 9, when it made it through the Public Safety Committee on a 5-2 vote. Callahan testified at the hearing, telling lawmakers about the evening when the pimp she thought she had escaped broke into her home, firing a handgun.

After the smoke cleared, Callahan and DiAngelo didn’t tell police they knew the shooter. Instead they gave conflicting descriptions of the assailant because they believed they would be the ones going to jail.

That disparity remains true today. For the past two Augusts, the Sacramento County district attorney’s office has spearheaded a multi-agency sting aimed at johns called Operation: Hot Spots, though far more women than men continue to be arrested. In 2019 so far, at least 37 women have been arrested for prostitution-related crimes in the county, compared to five men, two of whom were charged with pimping.

“It’s part of the game. Once you’re in it, you have to keep playing,” said DiAngelo, co-founder of Sex Worker Outreach Project’s Sacramento chapter. “You’re dealing with people holding you hostage and blackmailing you and shooting people that are trying to help you.”

“And you can’t tell anybody,” Callahan added.

By the time they moved into the cute home in Upper Land Park in the late 1970s, with its peaked roofs and latticed brickwork, Callahan and DiAngelo had survived multiple close calls on Sacramento’s notorious prostitution strolls.

DiAngelo, barely 19, had extricated herself from two pimps. Callahan, just 23 and forced to earn on Ohio’s unfamiliar streets, had recently gotten out from under a pimp who was holding a client’s car over her head. (SN&R isn’t using the pimp’s name because Callahan and DiAngelo, who used different names then, still fear reprisals.)

Coercion of sex workers often takes convoluted forms. In this case, Callahan had a client who let her use his car. Her pimp held onto it, meaning Callahan couldn’t leave him without that being leveraged against her, either with the client or the cops. So Callahan got her friends Pat and Bill to “steal” the car and get it back to the client. It worked. Callahan left. She and DiAngelo settled into their new life, or so they thought.

Except for the pistachio-green paint job and a tucked-back second story addition, the house looks much like it did in the late 1970s, Callahan and DiAngelo say. The two longtime friends clutch each other’s arms and take it in. They were “babies” then, DiAngelo said.

“We were so stupid. We thought we could just go away,” DiAngelo said.

On a late spring or early summer evening, the women recall, Pat, Bill, Callahan’s brother and her girlfriend were over at the house. They remember a frantic knock at the door. Callahan cracked it to see one of the pimp’s other girls in tears. Before Callahan could unlatch the chain, the woman was shoved aside and the pimp busted through gun first.

Callahan and DiAngelo managed to slip out. They heard gunshots pop behind them. They crouched behind a parked car across the street. They saw Callahan’s brother and his girlfriend slip out, but didn’t see anyone else emerge.

After several long minutes, they crept up the driveway, through the door, into the living room, across a furnace grate in the hallway floor, into the den, into a bedroom. They braced each room expecting bloodshed. They found none. They kept going. They made the kitchen and turned left into the laundry room. The little white room was smeared and spattered red.

No one was in the room anymore.

“Beyond the blood, it was like, ‘What are we going to find?’” Callahan said.

They waded into the backyard, came to a waist-high fence and saw what lay beyond it.

“We couldn’t find Pat, but we found Bill,” DiAngelo said, her voice catching.

Bill lay face down in the neighbor’s yard with a gunshot wound in his back. Helicopters roared overheard. Sirens wailed. The cops had arrived. It never occurred to Callahan or DiAngelo to call them.

“This is how crazy it is,” DiAngelo said. “Almost every house on this block probably called the police once those gunshots went off.”

“But we didn’t,” Callahan said.

Callahan found her brother and his girlfriend. They were “straight,” she said. They knew nothing about her secret world. They learned that night. They agreed not to talk to police. Even the victims played dumb.

“None of us told the truth,” DiAngelo said.

“I think a big part of that too was them protecting us too, see,” Callahan said. “Pat and Bill, protecting us.”

“Can you imagine getting shot through the chest and still not talking?” DiAngelo said. “If we had protection to tell them or report, it wouldn’t have even gone to this point.”

Callahan and DiAngelo don’t know what became of the pimp. According to online court records, a man with his name twice faced prosecution in Sacramento Superior Court—for misdemeanor theft in 1991 and several counts of identity theft in 2006—but the charges were dismissed each time.

A Police Department spokeswoman said records from that period were stored on microfiche in a basement and not readily available. A public records request was pending.

Callahan and DiAngelo didn’t leave their new home. They scrubbed and mopped blood with soap, water and bleach. They tried to turn a red door white again.

Four decades later they stand outside looking in. The women have a few other places like this, places they go to remember. They’re like invisible memorials, honoring private wars.

“I don’t know why you do, but you go back just to go, ‘Yeah, OK, I’m here. This all was real and I survived it,’” DiAngelo explained. “Because nobody else sees it.”

A woman who lives across the street exits her door and watches Callahan and DiAngelo motion at their former house and former neighbors. She finally speaks up, asking them what they’re doing here. Callahan puts on her mask. It looks like a smile. She beams it across the street.

“We used to live here,” she called.