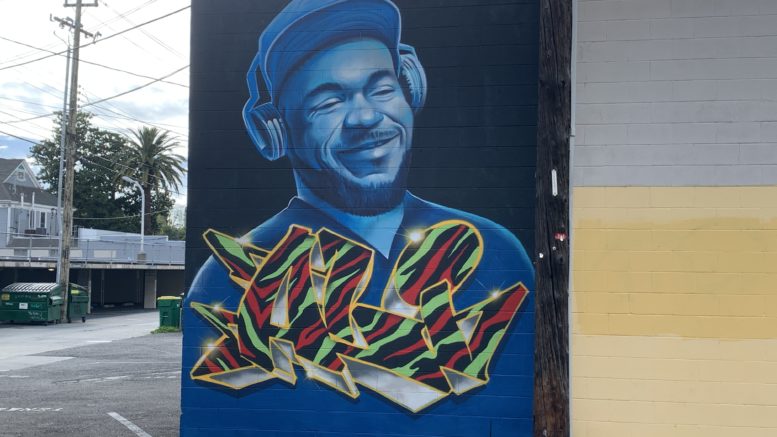 Artists Shaun Burner and Ernie Upton honored their friend Ali Trotter with a mural on K Street that captured his exuberant smile and oversized headphones. (Photo by Steph Rodriguez)

Local rapper Paul Flames is torn up as he flips through photos on his phone. In nearly every picture, somewhere, there’s local hip-hop supporter, promoter and emcee Ali Trotter. On New Year’s Eve, after a long battle with depression, Trotter took his life. Flames was one of his closest friends.

He stops on a photo of Trotter from last year, when they worked at the annual Hiero Day Music Festival. Even during the slog of a workday, Trotter radiates joy.

“He’s smiling even when he doesn’t want to smile,” Flames says.

It’s a week after the Habby Day celebration of life event, where the hip-hop community came together in January, nearly packing Harlow’s Restaurant & Nightclub to honor Trotter, with performances by The Cuf, Chuck Taylor, C-Plus, Midtown Marauders and several other local emcees. This celebration came after local artists and friends Shaun Burner and Ernie Upton honored Trotter with a mural on K Street that captured his exuberant smile and oversized headphones and was done in classic hip-hop street graffiti-style.

Trotter was an emcee known as Kara Tha Mystery. Along with childhood friend Reed Wheeler, aka Haseown, the duo released a couple of records in the ’90s as Ill Semantic Kings, one titled I Still Krush and the other Freestyle Comp 360. But most people who came to honor Trotter at Harlow’s paid tribute to him as a kindhearted, loving human being and fervent supporter of Sacramento hip-hop.

“If you were throwing a show … The Cuf or Tribe of Levi, they knew Ali would be at their shows,” Flames explains. “He would get me out of the house to come to any concert. Ali was a ball of joy.”

When The Cuf’s member Crush took the stage at the January event, he told the crowd that Trotter would show up and help load gear. This anecdote elicited a knowing laugh from the crowd. Trotter went above and beyond for the scene.

“He was definitely very selfless,” says close friend and former roommate Dustin Worswick aka DJ Epik. “He would be one of the first people to help when someone needed anything, moving or promoting an event. Even if it wasn’t something that would benefit him.”

That night, Fritz from The Cuf told SN&R that he hadn’t seen all these people in the same room for a decade. But it makes sense that they would come together for Trotter.

Sacramento hip-hop has always been a tight-knit, underdog scene because venues have consistently denied hip-hop acts their stage. To those who knew him, Trotter was the caring, charismatic teddy bear of a rapper that showed up for Sacramento hip-hop, even when no one else did.

“We don’t have anybody but ourselves,” says a friend, Olivia Monahan. “We may not like each other all the time. There’s no one else in this community I would call first if something was wrong in my life.”

Making music was never about fame or money for Trotter and Haseown. It was pure love.

“We were about the culture of hip-hop. It was more important to be a dope-ass underground group than to be big,” Wheeler says.

Hip-hop in Sacramento struggled in the ’90s with no dedicated venue. Some groups, such as The Cuf and Fonke Socialistiks, built fan bases by pairing up with rock bands including the Deftones and Papa Roach.

“One of the guys that helped start the hip-hop scene—much love to him—is Jerry Perry,” says rapper Chuck Taylor from Fonke Socialistiks says. “The Cattle Club, the one place that allowed hip-hop to go down in the early ’90s.”

In the 2000s, several Sacramento groups moved or broke up. Trotter’s group ISK became less active once Wheeler had kids.

When everyone least expected it, around 2006, Taylor created L!fe, a hip-hop hotspot at The Distillery in Midtown every Thursday night. He had help with Epik, emcee Blee and of course Trotter, the event’s biggest hype man. L!fe was hip-hop culture on full display, with breakdancing, and a “fresh code,” meaning you could show up dressed overtly hip-hop—contrasting with some clubs’ coded dress codes: no baggy clothes, no red or blue colors. Taylor says crowds showed in the hundreds.

During this era, Trotter moved in with Worswich, who saw that he was frequently sad when he wasn’t surrounded by people.

“Ali was quiet and kept to himself,” he says. “When he would get around his friends, he would be the life of the party.”

As soon as he went back out to shows, surrounded by music and people he loved, he beamed with joy.

“He was cleansing himself at every show,” Taylor says. “And then he went home and dealt with his shit.”

A way of life

However, the scene struggles with gentrification and racism. Many venues still refuse hip-hop; in 2015, after a shooting near Ace of Spades unrelated to the Nipsey Hustle concert, clubs tied the shooting to the event.

Blue Lamp, one of the few places that booked local hip-hop, closed last year. Owners Gabi and Ben Garcia now own Café Colonial and continue to host hip-hop, along with some non-clubs including Classy Hippy Tea and Sol Collective. Local collective ZFG put on guerilla hip-hop open-mics because they couldn’t find a stage.

“Artists release their first couple albums. It starts to gain traction. They realize there is a lot of forces here that prevent them from being successful, so they go other places: The Bay, L.A., New York,” says local rapper, educator and ZFG member Paul Willis.

Trotter stayed supportive of the hip-hop scene, but as he got older, more people became aware of his depression through his Facebook posts: “My birthday is coming up hopefully I’ll make it.”, “Life just gives me more reasons to hate it.”, “Nobody cares anymore.”

“He was a better lyricist than a lot of people gave him credit,” Wheeler says. “We were getting momentum, but then, just everything happened.”

Trotter had music again. He’d moved to the Bay and landed a job at Tesla. None of this quelled the power of his depression.

“No matter how good you’re doing, depression is a real thing,” Worswick says. “He was a great guy and a great friend.”

Mental Health was discussed at his celebration event at Harlow’s, but a lot of folks honored him through music. It was a fitting tribute.

“Hip-hop is a beautiful culture,” Flames says. “There’s a kid named Hobo Johnson. He reminds me of us growing up. He goes off his emotion. That’s what hip-hop is. Hip-hop is community. Hip-hop is a way of life.”

A city of gardeners

Be the first to comment on "Connected through music"