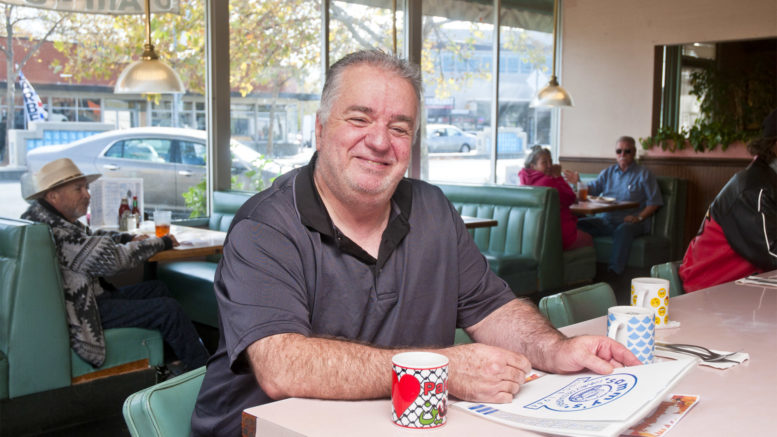 “When you get old, three things happen to you,” he said. “You start forgetting things, and then … oh, I forget the other two.”

Farhoud is well-known for his unpredictable good humor and spontaneous camaraderie among the legion of regulars who call Sammy’s Family Restaurant a second home. A lot of them come in specifically to see him – especially throughout this past year, the restaurant’s 75th anniversary.

If you’re new to Sammy’s and haven’t met Farhoud, you soon will. Not only is he the owner, he’s the restaurant’s good-will ambassador. Don’t be shocked if he suddenly sits down at your booth and asks how you like his food. In a way, he’s the star of a stage show. “Hospitality is the name of the business,” he said.

“Everybody comes here,” said Farhoud. “Young, old, [all ethnicities]. Many from the neighborhood, some from Elk Grove, Colfax, Roseville, Rio Linda. A lot of customers met their future husbands and wives here. We know everybody and everybody knows us. It’s like ‘Cheers.’”

Sammy’s opened in 1944, and not much has changed since Farhoud bought it in 1996, including the breakfast-lunch-dinner menus. They’re a step back in time, with sides of cottage cheese and applesauce, and a popular main of liver and onions. Appropriately, there’s a meatloaf special. “One night a lady said to me, ‘I didn’t like the meatloaf.’ I asked her why. She said, ‘It was too meaty.’”

Farhoud improved the quality of the food and the service after taking over, and added some new dishes, he said, but “we kept the rest the same” – including the turquoise booths. “We haven’t raised the prices in 10 years,” he added.

Sammy’s is a well-kept, well-populated stalwart on Del Paso Boulevard, but it’s also a heaping serving of Americana from an era when diners with names like “Mom’s” crowded the post-World War II landscape, and where the waitresses called you “Hon.” At Sammy’s, they still do.

Farhoud, 58, is a Palestinian who was born and grew up in a refugee camp in Lebanon. He arrived in the U.S. as a student at age 19. After stints at universities in Louisiana and Texas, he earned a degree in business management from Sacramento State.

Wisely, he calls on his heritage to prepare Mideastern dinner specials two or three times a week – well-spiced marinated chicken thighs with basmati rice, lamb shanks, beef kafta with potatoes and tomatoes. “We make the food we want to eat,” he said. “I tell my chef, ‘I don’t cook, but I make food taste good.’”

Sometimes, Farhoud will fill a bowl with a fragrant daily special – such as chicken-spiked navy bean soup – and sit near the front door. “People come in and say, ‘What are you eating? I’ll have that!’”

At one point, he was offered “a few million dollars” for Sammy’s, and turned it down. “People asked me why I didn’t sell. I said, ‘When people retire, they hang out in coffee shops. I’m hanging out here already.’ I don’t work for the money. I like this place because I have lots of friends and family here. I would pass away in two weeks if I retired.”

For a time, Farhoud made regular trips back to Lebanon each year. His friends there would ask him why.

“I’d say, ‘I come here to see how you guys live, then I go back home and appreciate what I have.’ America has been very good to me. This is home.”

He paused to cut into a piece of chicken. “Life is good,” he said with a laugh, taking a bite.

Be the first to comment on "Sammy’s keeps diners happy"