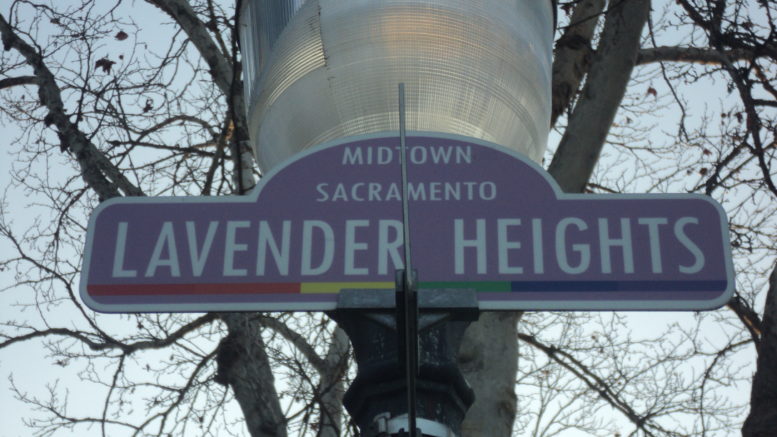 The intersection of 20th and K Streets – overseen by the above sign – is considered the heart of Sacramento’s historically LGBTQ+ Lavender Heights sector.

Why are LGBTQ+ people so afraid of the Sacramento Police Department?

To find out, SPD is holding virtual “town hall listening sessions” so LGBTQ+ residents can answer that disturbing question themselves.

At the first forum, in mid-November, the department got an earful from more than a dozen speakers who collectively described the long, sad history of interactions between the city’s police force and the LGBTQ+ community. Officers unfairly harass and beat LGBTQ+ people, especially those of color, with only a few being respectful, the speakers complained via Zoom. Some even said they avoid dialing 911, fearing that a police response would worsen an emergency.

The second forum, originally set for Jan. 25 with Police Chief Daniel Hahn participating, was postponed and, as of this column’s deadline, rescheduled for Feb. 22.

Briggs didn’t answer another question: what Hahn intends to say during the forum, which is expected to last two hours. The widely respected Hahn, who became Chief in 2017, may not say much beyond thanking the participants and vowing change. These are, after all, listening sessions, in which SPD is gathering info, that, it is hoped, will help repair relations between its roughly 680 sworn officers and LGBTQ+ people.

SPD committed to the town halls under a 2019 agreement with the Sacramento LGBT Community Center, which is supported by The California Endowment. Among other things, SPD also pledged that new officers would undergo “LGBTQ-focused community engagement training.”

Pinpointing how many LGBTQ+ people have been impacted by Sacramento cops is difficult, David Heitstuman, CEO of the LGBT Community Center, told this column. Local law enforcement agencies don’t collect or report sexual orientation or gender identity data through police reports or complaints filed with the city, he noted.

But one thing is certain, he said: “A lot of work (has) to be done to build trust between Sac PD and some of the most marginalized in the LGBTQ+ community, particularly Black and Latinx folks.”

The ongoing forums can be “a start” toward building mutual trust, Heitstuman believes. That’s why the Center will again distribute invitations, along with links, to the next SPD-hosted virtual town hall, even though it is not the organizer.

About 60 people attended the first virtual town hall. Attendance for the second may be higher because of Hahn’s drawing power.

As one queer nonbinary Sacramentan told this column: “I did not participate in the first Sac PD town hall. But I want to attend the next one. It’s not often we can speak to Chief Hahn.”

For more about The California Endowment, visit https://www.calendow.org/