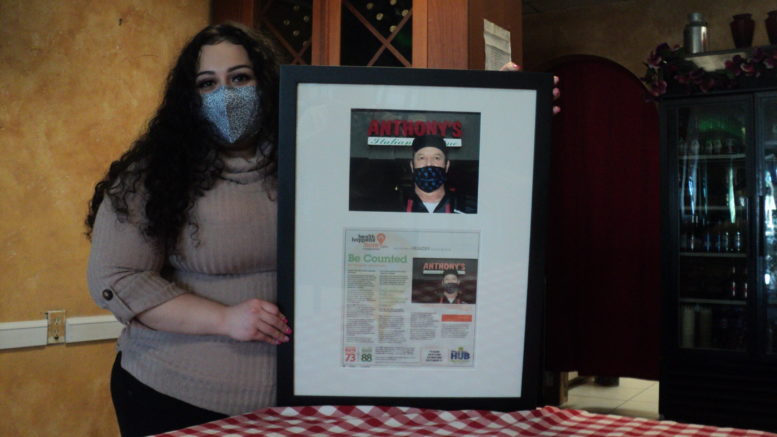 No one was prouder to be in a TCE column than Abe Ruiz, owner of Anthony’s Italian Cuisine in South Natomas. In August, Ruiz expressed strong support for the 2020 Census. The resulting column, with his words/picture, is at Ruiz’s restaurant, in a pro frame. “This story meant a lot to my Dad,” his daughter, Crystal Ruiz (above) said. “We’re sad the column is ending.” Photo by Edgar Sanchez

All good things must come to an end.

And, sadly, this is the Sacramento News & Review’s final California Endowment column—one that has delivered essential news about 200 times since 2012.

Before the farewell, a little background.

In 2010, The California Endowment launched a 10-year, $1 billion initiative to improve the health of Sacramento and 13 other high-need communities statewide, through a partnership between TCE and local entities, mostly nonprofits that would receive Endowment funds. The ambitious plan sought to enhance employment opportunities, education, housing, neighborhood safety, environmental conditions and other crises in Sacramento’s underserved sectors.

This column debuted in 2012 to document the plan’s progress in Sacramento. Commissioned by TCE, it was produced by N&R Publications, which is independent from SN&R’s news division.

Now that the initiative is ending, leaving a legacy of success, so is this column, which reported on everything from anti-police brutality rallies to voting drives.
+++
The first five California Endowment columns appeared in 2012, without bylines.

The sixth, dated May 24, 2012, finally had a writer’s name: Linda DuBois.
“When I wrote that article, I had no idea I’d be the first byline on what would become” an enduring series, DuBois, now an associate editor at The Davis Enterprise, said recently. “I’m proud to know I helped kick off … a (long) series about dedicated citizens’ efforts to make their community better, safer and healthier.”

Her byline graced several other columns until 2015, including one about a pastor who guided at-risk kids away from trouble in Oak Park.

“I asked the pastor what motivated him,” DuBois said. “He replied he was tired of doing so many funerals for young people who died from violence and then ministering to their grieving families afterward.

“I never forgot that.”

More than 20 writers took turns authoring this column, SN&R files show. Some wrote one or two; others many more.

In all, roughly 220 columns, each with at least 400 words, have been published, usually every two weeks. At least 15 were actually ads that, in a few words, powerfully promoted TCE-supported causes such as the need to end the school-to-prison pipeline.

The final columnist, Edgar Sanchez, wrote 101 columns, most of them produced during the last four years.

His statement: When I took on this job, I had 32 years’ experience writing for American dailies. As a columnist, I tried to be fair to all. Just as before, I also sought to prove that a reporter needn’t be a rude bulldog to do his job.

I was honored to write this column.

My gratitude to the newsmakers/readers.

For more about The California Endowment, visit www.calendow.org