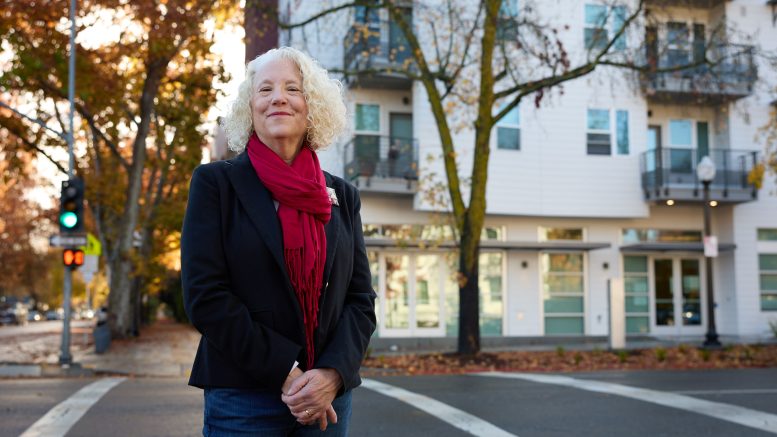 Cathy Creswell has more than 30 years of experience in affordable housing. (Photo by Fred Greaves)

Cathy Creswell says that having a safe, affordable home is more than about housing — it’s about people’s health, economic stability and children’s education.

With more than 30 years of experience in affordable housing, Creswell has worked in government and private organizations. She was a Sacramento Housing and Redevelopment Agency commissioner, an acting director at the California Department of Housing and Community Development, and is a current board member at the nonprofit organization Mutual Housing California.

“Fundamentally, some of the most important decisions about where housing is built, and the cost of housing, are determined by local governments,” she says. Creswell feels some local governments not only delay building affordable housing, they covertly legislate against it. “The land use and zoning powers that they hold will impact whether or not additional affordable housing will be built, or any housing,” she said.

Creswell spoke to us about how she believes in creating government incentives to inspire more affordable housing projects, and how at the same time, local anti-housing regulations need reform.

What do you see as the major factors driving this current housing crisis?

The lack of supply has driven up rents and put the purchasing of homes out of reach for lower-income households, although the severity has now impacted moderate-income households. Another factor is folks moving in from the Bay Area, as their housing crisis has exploded. That migration of people coming in with additional resources is also driving up costs and limiting supply.

Certainly, the resistance to affordable housing continues and has continued to have an impact. And the pandemic exacerbated the housing crisis because many people lost their jobs, and things tightened up.

Sacramento also continues to see the impact of historic discriminatory practices that manifested in both land use as well as government funding. There were people in our community who were prohibited from being able to buy homes, and their families, generation after generation, have not had the resources to help their kids. Those historic impacts are still being felt in Sacramento.

So much of single-family zoning was created as a mechanism to exclude people considered undesirable, which could include renters and particularly people of color. When the federal government programmed red-line areas [housing zones that segregated people of color] and said where they would and would not invest, that also brought about such local zoning ordinances.

In addition to these factors, what about high interest rates and inflation?

That’s a new phenomenon. But even when we had these historic low interest rates, people were still cut out of the market because they didn’t have credit standings or money for a down payment. When you have lower income, everything is intensified in terms of the impact.

What are some ways to solve the housing crisis?

We have to invest in affordable housing where rents are regulated for a long time to create the kind of stable households families need.

For every report opponents can show that says rent control will destroy the markets,there are reports that show a well-administered and reasonable ordinance can insure landlords get what they need and protect tenants.

I like to say that the best first-time homebuyer program is a safe, affordable regulated rental unit. These renters can start building the financial stability they need to be able to purchase a home. One new pilot program at Mutual Housing California allows renters to get credit for their on-time rent payments. That has been successful, and there are other credit agencies looking at how to expand that for the general renter population.

It is also fundamentally important that local governments develop zoning and land-use policies that encourage affordable housing, and that they remove barriers.

But isn’t the problem that many local governments are refusing to do that?

I think you can use the power of the state and federal government, using “housing elements” where [local governments] have to plan for future housing needs. Every local government in the state is required to get an allocation for the amount of growth expected to occur in that jurisdiction for the following eight years.

Don’t affluent communities routinely get around these reporting requirements with vague answers, when they have no intention of building affordable housing?

Yes. While I was at the state, we would find communities like Folsom out of compliance, but that was all we could do; say they were out of compliance. The only enforcement mechanism was civil litigation.

The state eventually sued Folsom, and the remedy that the court ordered was to say “until you correct this deficiency, you are prohibited from issuing any building permit at all.”

In some parts of Southern California and the Bay Area, where communities limited growth completely, the building industry itself would sue them.

And that’s the way it worked until 2017, when a package was put forward by the legislature. In the last couple of years, the California HCD [Department of Housing and Community Development] has been authorized to take action on violations of housing law, and to work in conjunction with the Attorney General’s office to potentially take legal action against local governments.

But it’s also important to recognize the local boards and governments that are doing the right thing. At the state, we had a couple of programs that awarded grant funds for every affordable housing unit permitted. When those programs were implemented we saw the state housing element compliance did increase, and we saw significant amounts of affordable housing being proposed.

The homeless are often considered a separate problem. But aren’t they an integral part of the affordable housing crisis?

Yes, you cannot solve homelessness without solving the affordable housing crisis. There is also an understanding that if people have addiction issues and mental health issues, it is impossible to treat those conditions while they are living on the streets.

We have to have places for them to go, even if you are just building more shelters. But even with very good shelters and wrap-around services, at some point there is nowhere to send them. Landlords can be encouraged to take people. Sacramento Step Forward is working on that.

But we must also support the building of permanent supportive housing, which includes services that can stabilize people’s lives. The federal government has failed to adequately support an incredibly effective program that has benefited some of the most vulnerable people for decades. But they also have failed to adequately fund housing authorities to ensure adequate maintenance and support for public housing. Some type of voucher program should be an entitlement, like food stamps, to support a safety net.