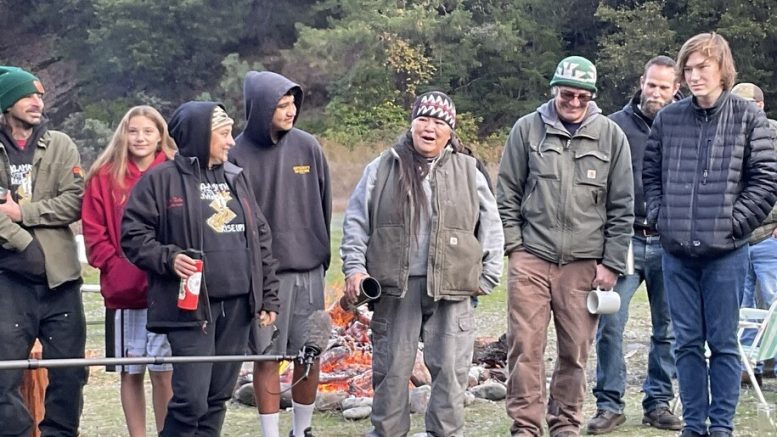 Klamath Justice Coalition's watch party for the FERC meeting on the Klamath River. Photo courtesy of Save California Salmon.

Tribes, fishermen and environmental groups get collective win so that fish can swim free again

The Federal Energy Regulatory Commission, or FERC, has unanimously approved its staff recommendation to surrender the license for the four lower PacifiCorp dams on the Klamath River in California and Oregon – and begin the dam removal process.

These dam removals on the Klamath will open up over 240 stream-miles of salmon and steelhead habitat that has been blocked to fish migration for over 100 years. The project, the largest of its kind in U.S. history, is funded by dam owner PacifiCorp and a voter-approved California bond measure.

Klamath Basin indigenous tribes, along with commercial and recreational fishermen and environmental groups, had worked on making dam removal a reality for two decades.

“The Klamath salmon are coming home,” said Joseph L. James, the Chairman of the Yurok Tribe. “The people have earned this victory and with it, we carry on our sacred duty to the fish that have sustained our people since the beginning of time.”

“Congratulations to all those who poured their blood, sweat and tears into making this happen,” Davis said. “Water and fish health are at the heart of our identity as Native People and we are looking forward to seeing a healthier watershed and fishery which will result in healthier communities for all Klamath Basin tribes. Now we must keep the momentum going and we are looking forward to working with all of our neighbors and partners in that effort.”

“Today’s victory was well-earned by the thousands of people who fought for clean water, healthy fisheries, and environmental justice for Klamath River communities,” Attebery wrote in a statement. “I am grateful to everyone, from the youth to the elders, Governors Newsom and Brown, and the team from PacifiCorp who made this victory possible.”

In the Upper Klamath Basin above the dams, the Klamath Tribes of Oregon are looking forward to seeing salmon return after being absent for over several generations.

“Our people have been without c’iyaals (salmon) for over a century,” reflected Klamath Tribes Chairman Clayton Dumont. “We welcome the fish home to the Upper Klamath Basin with open arms.”

Commercial and recreational salmon fishing families along the West Coast are also celebrating the FERC vote.

“Restoring the Klamath gives our struggling salmon fishing industry a chance to survive,” noted Vivian Hilliwell, a former commercial salmon harvester and now the Watershed Conservation Director for the Pacific Coast Federation of Fishermen’s Associations. “The possibility of revitalized Klamath fish runs gives us hope that we can continue our tradition of bringing healthy wild salmon to dinner tables across America.”

Before the vote, FERC Chairman Richard Glick and other commissioners commented on why they supported the dam removals.

In issuing the Final License Surrender Order, Glick explained, “Dam removal makes sense in large part due to fish and wildlife protections. But there is a discussion in the order on the impact on Tribes and the ability to have their traditions and cultural practices improved… I think it’s a very important issue.”

He added, “A number of years back the commission did not think about the impact of our decisions on Tribes. That’s an important element in today’s order.”

The document for decommissioning and removal of four dams – Copco No. 1, Copco No. 2, J.C. Boyle and Iron Gate – contains the FERC staff’s evaluation of the environmental, cultural and economic impacts associated with the decision.

The vote took place 20 years after a massive fish kill left over 60,000 adult salmon rotting along the banks of the Klamath River on the Yurok Reservation in September 2002, a disaster that the author of this article was one of the first journalists to cover. The fish perished from disease spurred by low, warm water conditions under abysmal water management of the river by the G.W. Bush Administration.

“The fish kill is a lot worse than everybody thinks,” said a shaken Walt Lara, then the Requa representative to the Yurok Tribal Council, in a phone interview with me back then. “It’s a lot larger than anything I’ve seen reported on the T.V. news or in the newspapers. The whole chinook run will be impacted, probably by 85 to 95 percent. And the fish are dying as we speak. They’re swimming around in circles. They bump up against your legs when you’re standing in the water. These are beautiful, chrome-bright fish that are dying, not fish that are already spawned out.”

The fish kill served as a lightning rod to unite Klamath River Tribes, environmentalists, fishing groups and the public around the cause of dam removal and salmon restoration on the Klamath, the second largest producer of Chinook salmon in California next to the Sacramento River.

“After the 2002 fish kill, we committed ourselves to defending our river and our cultures no matter what it would take,” said Molli Myers, co-founder of the Klamath Justice Coalition and member of the Karuk Tribe. “That kind of extraordinary commitment by ordinary Indians is what led to this victory.”

According to the tribes and groups, today’s Klamath River salmon returns are less than 5% of their historical abundance, while some runs of salmon are completely extirpated from the system. Dams deny salmon access to hundreds of miles of historical habitat, degrade water quality, and foster the spread of fish diseases. Scientific studies and dam removal efforts in other watersheds have demonstrated that dam removal can reverse these trends.

“I inherited the responsibility to take care of my relatives, the salmon, from my father,” concluded Save California Salmon Education Director Charley Reed, who was 7-years-old when with the Klamath fish kill set a movement in motion. “While I have spent most of my life as an activist at protests and rallies, my hope is for my children to spend more time fishing and less time protesting.”

Following formal acceptance of the license transfer by both states and the KRRC, parties led by the Klamath River Renewal Corporation will take a number of pre-construction steps during 2023 to lay the groundwork to complete removal of the dams, according to a statement from the California Natural Resources Agency.

The Copco No. 2 dam will be removed as soon as the summer of 2023 under the approved plan, with removal of J.C. Boyle, Copco No. 1 and Iron Gate dams planned during 2024, the CNRA stated. The four dams are located in Klamath County, Oregon and Siskiyou County California.

“This enormous step forward will make historic progress in revitalizing the Klamath River, which is vital to the sustainability of all communities in the Klamath Basin,” said Brown. “Beyond ecological restoration, this is also an act of restorative justice. Since time immemorial, the Indigenous peoples of the Klamath Basin have preserved the lands, waters, fish, and wildlife of this treasured region — and this project will not only improve its water and fish habitat, but also boost our economy. I am grateful for the hard work and perseverance of the region’s tribes, and the partnership of California, who have come together for many years to make this possible.”

“Today’s action culminates more than a decade of work to revitalize the Klamath River and its vital role in the tribal communities, cultures and livelihoods sustained by it,” he said. “California is grateful for the partnership of Oregon, the Yurok and Karuk Tribes, Berkshire Hathaway and the many other stakeholders who came together to make this transformative effort a reality for the generations to come.”

As a journalist who has written hundreds of articles about the Klamath River and its fish – and the battle by Tribes, fishermen and environmentalists to undam the waterway and restore its fish populations – I also applaud FERC’s vote.

And, as an angler who has spent many hours fishing for salmon and steelhead on the Klamath and Trinity rivers since 1986, I fondly remember experiencing the best salmon fishing of my life on the Klamath in the fall of 2002 and 2012 – even better than anything I have experienced in British Columbia, Alaska and Oregon. I look forward to seeing the dams removed and the fish once again running into the Upper Basin and spawning as they did for eons until the dams were built.

Be the first to comment on "After 20-year battle, feds agree to remove dams on Klamath River"