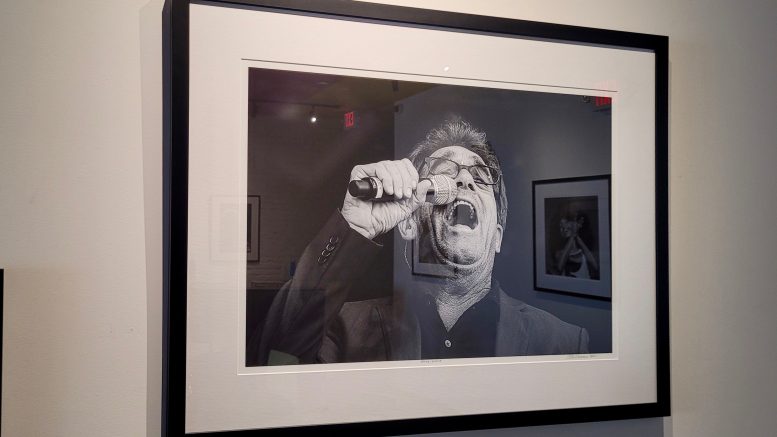 A number of iconic jazz moments in California have been captured by photographer Michael Solomon. Photo by Josh Perez

Ascending the stairs, visitors to the loft above Solomon’s Deli are beckoned by a screaming crimson glow: The words “The Russ Room” burn in hot, red neon to welcome incomers to a venue that’s hosted Oh Lonesome Ana, Space Walker and DJ Flower Vato. But at the moment, the Russ Room’s buzz is mainly about a captivating exhibit of black and white photographs called “Let’s Go See Some Jazz.”

The stills were taken by Michael Solomon at the Monterey Jazz Festival. The title of the show was uttered by Solomon’s father, Russ — founder of Tower Records and namesake of both Solomon’s and the Russ Room — when he opened the Chicago location of his famed records store in 1991.

From the age of 12, back when the first Tower Records opened on Watt Avenue, Michael Solomon began working at the store on Saturdays. Later, in high school, he found himself working at Tower during summers and weekends.

“—And then throughout the rest of my life, basically,” Solomon told Sacramento News & Review. “The store K street came later… I think in the 70s. What’s funny is that there’s still some of the signs and racks in there after almost 20 years.”

The Tower Records legacy may be carrying on in certain ways at 730 K Street, but, because of fate, it has taken some real fortitude to make that happen.

Andrea Lepore, cofounder of Russ Room and Solomon’s Deli, opened the businesses with partners who were intending to manage the business while she simply designed the space. At the end of 2019, on the eve of the pandemic, Lepore’s partners decided to focus on other projects, leaving her as the sole manager of the deli and venue.

“Then, well, you know what happened,” Lepore lamented, hinting at the looming shutdown that followed. “Good energy in the space. Such amazing history, even though it’s really only the four walls in the storefront that were remaining. Everything is new, but I just love the space, murals. Incredible.”

The photographs now hanging at the venue are from a collection that Michael Solomon captured from 1998 to 2012. After browsing through an archive of years of snapshots from the festival, Solomon picked out 14 portraits to create the exhibit. The net sale of Solomon’s work will benefit the festival, an event he’s attended regularly since 1990.

“I’m actually going to the Monterey Jazz Festival — going down there today,” Solomon said on Friday from the road. He added that the only year he’s missed was for his father’s 90th birthday. “Oh god, I have thousands of them that I could include,” he noted of the photographs. “I’ve been taking pictures at Monterey for 30 years.”

Lepore said that it was Russ’ widow, Patti, who first recommended incorporating Michael’s photography into the design of Solomon’s and the Russ Room. It was Michael Solomon’s idea to focus on shots he’d taken at the Monterey Jazz Festival.

“He had so many great memories with his dad, Lepore recalled. “They’re just beautiful images; they add such energy into the space.”

Master musicians Diana Krall and Cassandra Wilson almost emit the sounds captured within Solomon’s photos. Among the collection, too, are pictures of Jamie Cullum, Tony Bennet and the man at the ever-beating heart of rock and roll: Huey Lewis.

Most of the performers were acts Solomon had seen multiple times.

“The Dave Brubeck picture — I published a book in 2019 and that Dave Brubeck picture was on the cover of the book — that’s a wonderful shot,” Solomon acknowledged. “I think my favorite is the one of Esperanza Spalding. I keep very few photographs of my own … but I think I’m gonna print that one and put it up.”

Solomon remembered that, the year he photographed jazz vocalist Jamie Cullum, the performer was still too young to drink but was still engaged in energetic stage antics.

“He was only 18 when that picture was taken,” Solomon explained, remembering the series of magical moments that drew him to Cullum’s personality. “At one point he got up on a piano and he jumped off while he was singing — just going wild. It was an incredible performance and I thought he was very photogenic.”

Visitors to Solomon’s can check out the photos through Oct. 8 during normal business hours, while also getting a rare look at the Russ Room — one of an empty room and a bare stage. The space is warmly accented with Solomon’s silvery images, many of which are of very recognizable faces.

The exhibit was initially scheduled to close this weekend. According to Lepore, that run has been extended an extra week, giving visitors to Solomon’s extra time to view Michael Solomon’s work.

“There’s obviously some familiar faces, but then there’s just going to be some new faces that people don’t recognize,” Lepore said. “[Visitors] should see them and learn about them and listen to their music. It’s one of the reasons I created the Russ Room concept — not just to honor Ross, but to really embody all the things that he really loved and supported. Beyond just music, but art and music appreciation — of course, a good party.”