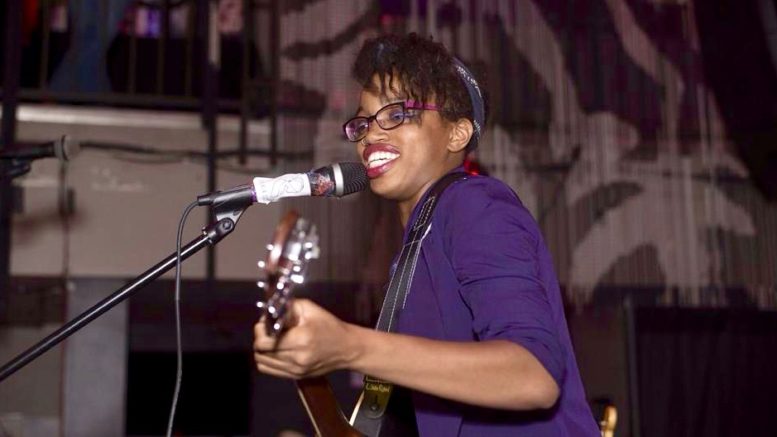 Echoes filled an otherwise empty room as the cosmic, one-woman show known as SpaceWalker thumped beats on the neck and body of a bright green ukulele. Clad in rainbow dreadlocks and a white Meow Wolf beanie, SpaceWalker began to strum her tiny music machine, singing, “I’m in love with where I live. I let the beauty and protection surround me.”

The Sacramento artist has flung her arms open wide, welcoming prosperity while completing an artist residency at Isis Oasis Sanctuary in Geyserville. Drawn there by a “whisper from the Universe,” it’s at the sanctuary where she recently recorded her fourth full-length work, “Crystal Baller.”

The album was released on Bandcamp on June 26.

“I spent a lot of time in this room [at Isis Oasis], cranking out music at witching hour for a couple of weeks,” she said. “I’d just come in, everything was still, the roosters have gone to bed, and I could record in peace.”

She added, “It’s been a literal sanctuary during the world siesta to still have a place to go and be on stage. That’s been a lot of it for me—the therapeutic side of things and the pure creative side of things. This has been a great time to put stuff together and experiment and get it all out.”

SpaceWalker will be performing on Aug. 6 at Russ Room in Sacramento. The show will feature a solo set for her, as well as a performance with her disco funk band, Black Yacht Club.

DJ Larry will close out the show.

Performing gives SpaceWalker the ability to freely express herself. She notes that the connection to art allows her confidence to believe that, while on stage, there are no wrong answers.

“My favorite part about performing now is definitely the fact that I feel like—on stage—everything that I’m feeling is part of the art,” she explained. “That’s a domain that I know I can turn to even if other things in my life feel busy or hectic. It’s really all about how you rock it.”

“Crystal Baller” was mixed and mastered by Sacramento-based Post & Beam Records and features cover art created by co-owner Laura Marie Anthony, which was based on a self-portrait of SpaceWalker photographed at Isis Oasis.

Coday Anthony, Post & Beam’s other co-owner, contributed additional percussion on “Gimme Mah Stack$,” but SpaceWalker had most of the album’s concept well fleshed-out before approaching the studio about production.

“Sometimes we’ll work together like that – I do think it adds a lot,” she said. “[There were] a lot of circumstances pushing me to complete [this album], including my laptop shutting down and not turning back on, out of nowhere, after I extracted all seven tracks. I finished the seventh one, and it’s like, ‘Don’t do anything else. That’s what this project is.’”

Anthony and his wife first crossed paths with SpaceWalker in 2017 at the Red Museum, a performance space in midtown Sacramento. He remembers initially being nervous about her choices, describing that first encounter as a tightrope act.

“Laura and I both fell in love with her stage performance and how she presents herself,” Anthony said. “She allows a lot of room for improvisation, which is also my background. She will do bold and adventurous things and you think it’s a mistake, but she leans into it. There’s no net, but she gets across the line and takes you home. It feels so good to hear her wrap up a tune.”

One recurring theme SpaceWalker embraced while working on the album was the idea of giving herself permission to practice openness and preservation. On “Gimme Mah Stack$,” in addition to successfully working in the word “equidistant,” she also urges listeners to seek serenity, assuring them, “It’s easy as pie.”

She believes that her life can be influenced by a higher power or spiritual helpers, but she’s also learned to focus her inquiry elsewhere.

“I think it’s also me: I’ve been really refocusing my attention lately on self-permission when it comes to well-being for myself … that’s the focus, that’s the goal,” she noted. “Say ‘yes’ to yourself and allow it to come to you, and the rest to filter out. It’s not always an easy process, but it’s a beautiful one, and I definitely think it’s worthwhile.”

BDE (not that kind)

SpaceWalker’s unique, interplanetary style goes beyond the confines of mere musical talent. She also practices the Japanese healing art of Reiki, with her own related store on Etsy called BlackStarBotanica. Here, she sells art, hand-bound incense sticks and an oracle deck that consists of channeled messages and her own original poetry.

The cards are illustrated by Sacramento artist Melissa Uroff.

“It’s called Big Deck Energy, and it’s about activating and appreciating your intuition in addition to bringing in some guidance,” SpaceWalker said. “It represents each of the seven chakras, and each card [contains] a reminder [of] what areas of your energy want to communicate with you,” she said. “They’re abstract intentionally to allow anyone who reads a card to get a message specifically for them.”

A nod to Mac Miller

An instrumental on “Crystal Baller” called “The Good Knows” pays tribute to rapper Mac Miller. It uses audio from the late artist’s music video “The Good News,” which was released posthumously in January 2020. According to SpaceWalker, the footage features Miller, who passed away in September 2018. She decided to produce the song and, when finished, relief overcame her.

“I heard him egging me on, so I added drums and synthesizer, and, as I was laying this track down, his talking [from the video] gave it new meaning,” she recalled. “There are times where, [when] I sit in meditation, I will hear or feel the voices of other musicians. I started to feel direct encouragement, like he was there in the room and we’re jamming, so it was a really beautiful moment.”

“He’s rocking this piano riff with his friend, jamming and talking. I feel like there were so many people that were thinking, ‘Where is the rest of that song?’ because it was this really beautiful riff and such a pure moment.”

The second track on SpaceWalker’s new album, “My Hands are Tinglin’,” features a bassline capable of vibrating laptops off their desks and bluetooth speakers from their shelves. Listeners can easily draw similarities to mid-’90s David Bowie, whose hand SpaceWalker claimed to have felt on her shoulder while recording the song.

“I really considered David Bowie and many others who are aligned with me, creatively, and have passed, to be guides,” she said. “There are times when I quiet my mind and listen, and they speak.”

She admits that, without Bowie’s artistic contributions to the zeitgeist, she couldn’t have conjured the song in such a way. As a thank you, she chose to end the album with a cover of “Ziggy Stardust” – with a Jamaican twist.

“For a few years of my life in Sacramento, I used to make it a habit to listen to reggae every Sunday,” she remembered. “I thought it would be really dope to do a reggae ‘Ziggy Stardust.’ I started to hear it in my head and couldn’t not do it.”

Connection without, preservation within

SpaceWalker’s lyrical choices throughout the album speak to her quest for self-improvement. She said the impetus behind the fifth track, “Elevatin’ Mah Mind,” comes from allowing herself to recognize and define healthy and unhealthy norms in her life, and making changes to allow for growth.

“I’ve been doing a lot of reflecting,” she said. “A lot of recognizing patterns that don’t feel quite right or feel unhealthy—if they’re an internal thing or an external thing—and just trying to shift into a different way of being,” she said. “It goes back to that self-permission. This past year has definitely increased my awareness of the need for that.”