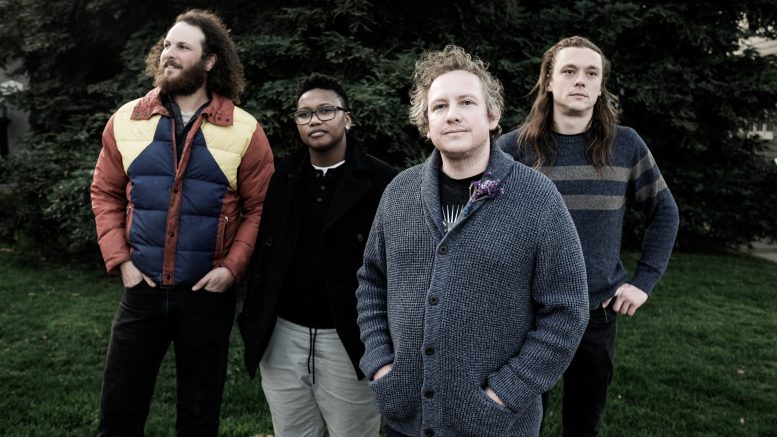 Oh Lonesome Ana is a Sacramento band with ties to Santa Cruz and Oakland. Photograph by Matthew Kadi

Maroon stems and green leaves soaking up the sunlight: It’s the early spring glimpse of pink teardrop flowers emerging to welcome the bees and insects of the Santa Cruz mountains. This species of manzanita — arctostaphylos ohloneana — lends its name to the Sacramento band Oh Lonesome Ana.

Fronted by Santa Cruz native Evan Bailey, the sonically obsessive group’s name is also a reference to the Don Gibson classic, “Oh Lonesome Me.” With Zach Peach on drums, Ashley Maiden playing bass, Jacob Bradford handling guitar and Bailey singing, Oh Lonesome Ana will perform at the Starlet Room on June 17. The show will double as an album release party for their debut, “Megadeth Tee.”

Bailey and Peach shared the inside story behind the new album with SN&R. Unlike other bands that Bailey has been part of (he and Maiden are in the Oakland band Sun Valley Gun Club) recording “Megadeth Tee” was a totally unique experience. The songs weren’t developed in-studio from rough demos. Instead, the final versions of the tracks were based on how songs felt live.

“There were times where we changed around entire sections,” Bailey recalled. “We came in with a basic idea, and Zach and I played live as a two-piece before playing as a full band. We were playing back in like 2019-2020. The songs benefited from live performance as opposed to just hashing them out in the practice space or whatever.”

Peach said that, once the duo became a four-piece, they worked out the album’s structure as a team. With new demos made from their live-tested songs, they had a “roadmap” of what direction to take.

“It’s a pretty talented bunch, so it was really cohesive and just came out sounding good and clean,” Peach observed. “There wasn’t a lot of repairing we had to do after we recorded it all live to tape.”

According to Bailey, many of the songs on the album were co-written by long-time collaborator Johnny Allen. Bailey said that the collaborative process usually consists of Allen sending lines of prose that Bailey then distills into lyrics. Bailey also considers his lyrics to be “like collage art,” admitting that his decade-long writing partnership with Allen keeps him from knowing where one of them starts and the other begins.

Grammy-nominated producer Jack Shirley recorded most of “Megadeth Tee” at his Oakland studio, Atomic Garden, last November. Shirley talked about a years-long relationship working with Bailey in and out of the studio, adding that, as a group, Oh Lonesome Ana creates a fulfilling and fruitful recording experience.

“They’re wonderful people and they make wonderful music,” Shirley says. “We’re always all on the same page when it comes to the approach and general vibe of it.”

Shirley and Bailey each vibe with the mostly analog methods that the producer employs in his studio. The studio does have both digital and analog capabilities, but Shirley’s specialty is to record artists live-to-tape, which requires musicians to be prepared and focused for each take.

Shirley explained that, with tape, it isn’t as easy as compiling a folder of audio files that can easily be edited together. Tape, a wholly physical recording medium, is also a costly and finite resource – one easily forgotten in an era of readily available digital recording methods. According to Shirley, there’s a set of nerves that develop when all involved know their time and supplies are limited and precious.

“Part of it is the sound; the other half is the restrictions that it puts on the process,” Shirley said. “It’s a big positive—where you can’t just fix any little thing. With tape, you’re forced to make decisions and just move forward. When people play with a safety net all the time, nothing’s at stake; there’s no consequences to anything.”

After music and vocals were recorded to tape, Bailey and crew worked with Pat Hills at Earth Tone studios to add background vocals. Because recording on tape is a costly affair, some of the album was produced at the home studios of guitar player Bradford and at Peach’s Dream Cabin Sounds.

Some of the references on the album are of bonds Bailey and Allen had with their family pets in their youth. In songs like “To Feel So Small,” or the album’s title track, the work that its two writers brought to the album carries a common theme of connections made in their youth.

“Good relationships, bad relationships — and what you take forward,” noted Bailey. “There’s songs on there about my animal friends from when I was growing up. It’s just a nostalgia-ball. In [the album’s title track] ‘Megadeth Tee,’ there’s a reference to my childhood pet: my closest friend when I was a child, her name was Grace, a black lab.”

In “I’ve Got Your Blood,” Bailey defines a relationship with a grandfather who died 12 years before he was born. When Bailey’s maternal grandparents were married, he said his grandfather lied to his grandmother about an apparent twenty-year difference in age between them.