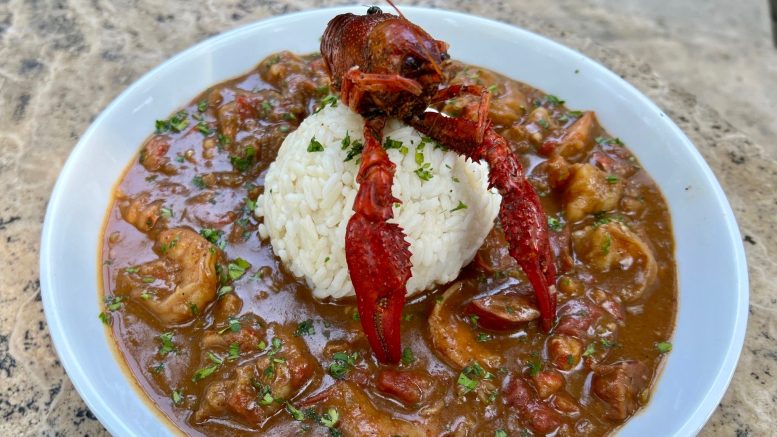 Crawfish and Catfish Festival on Sept. 10 &11 is the culmination of years of party-throwing experience from one of the city’s true personalities

“Louisiana Sue” Ramon remembers growing up in the calm, slow-breathing magic of a Gulf Coast night.

Every Friday, Sue’s family rolled up the carpet on their hardwood floor, put a Fats Domino record on the old High-five and started dancing and eating seafood as the sun went down. Children would be playing in the yard. The “Holy Trinity” of onions, celery and bell peppers would be juice-rumbling in some rue – the kitchen’s big, iron pot giving birth to a gumbo that had been fussed over for hours.

This was divine dusk in Chalmette, Louisiana, a Yat-talkin’ neighborhood along the Mississippi River that New Orleanains considered “just down the parish.” It was a place where locals bumped into musical icons like Irma Thomas or the Neville Brothers while out running errands. It was a community where children referred to elders living on their street as aunts and uncles. Most of all, it was an eclectic corner of life that was at the mercy of sweeping hurricanes.

“We were always on the threat of being annihilated,” Sue recalls, “but we have a lot of French in us, so we live for the moment – and we enjoy what we have now. It isn’t about tomorrow, it’s about today.”

Four decades ago, Sue found herself a southern expat living in Sacramento. She missed the home-cooked gumbo, jambalaya and crawfish etouffee that she’d grown up with. She missed the stirring street jazz and Delta blues drifting off distant avenues. And when she thought about home, she really missed throwing joyous public events that felt more like family reunions.

Sue aimed to do something about it.

In 1985, she started hosting festivals infused with the culinary and sonic traditions that she’d known throughout her life. Overtime, her famous throw-downs have become a platform for some of the best Louisiana-style chefs in Northern California, not to mention an array of cutting-edge jazz, blues and funk talent from the area. The next go-around will be the Crawfish and Catfish Festival on Sept. 10 & 11 in Southside Park.

But the true X-factor in these galas is Sue herself – a one-woman storm who keeps bringing New Orleans’ boogieing, cocktail-splashed sense of Memento Mori to the heart of the Capital.

“You can see my memories at my events,” she admits with a smile. “They’re instilled in my mind, and that’s what I keep re-enacting. It’s a strong, strong feeling.”

Sue hadn’t been in Sacramento long before people discovered she hailed from Louisiana and started asking her to cook authentic meals for them. She was skeptical about the freshness of that endeavor, but then she learned that the region’s bread basket grows all the staples for making Gulf Coast cuisine. It yields rice. It sprouts bell peppers. It offers celery and onions. Even more surprising to Sue, it’s teaming with a clawed, crawling ingredient that’s vital to many Gulf dishes.

“Everything on a hog is good in Louisiana, but crawfish is king,” Sue explains. “You have two species of crawfish in California. One of them you catch in the river up in the Delta, and that’s a deep-water crustacean – harder shell, smaller tail, less eatable meat. Separate from that, in the late 30s or early 40s, a Frenchman from Louisiana moved to Yuba, and he brought in crawfish to put in his rice fields. And what those crawfish do, is they glean the bottom of the rice, making it easier to harvest; but also, it makes that crawfish meat itself sweeter. Their tail is longer. Their head is smaller. And they’re a crawfish that’s easier to season.”

She adds with a burst of excitement, “When I found out there were crawfish here, I went insane: I said, ‘Well, we need to cook them!’ You know, ‘What are you doing with them!?!’ … I’d start driving by the rice fields and think, the only thing missing here is the moss in the trees – and we would be back home.”

After writing her own cookbook, “Louisiana Sue’s Cajun Cookin’ Made Easy,” she threw her maiden voyage of an event – a Mardi Gras party in Old Sacramento with costumes, floats, marching bands and 25,000 revelers in attendance. That was followed by Sue hosting the Isleton Crawdad Festival in 1986. After that, she organized an ongoing series of parties in the Delta, Yuba City and Sacramento, as well as in Reno, Las Vegas, the Bay Area and even Atlanta, Georgia.

Sue’s crawfish and catfish festivals are always held in early September, since the best season for crawfish runs with the area’s rice harvest.

One person who will be accentuating great Gulf Coast tastes at the next one is Chef Dontye Ball, the man behind San Francisco’s Gumbo Social. Ball’s family is from Mississippi, and his extended relatives are from Louisiana. He’s become so intense about what he bubbles up with the Trinity, that his nickname is “Mr. Gumbo.” The sensational flavors Ball’s bringing to the Crawfish and Catfish Festival are already a staple at Bay Area farmers’ markets. Lately, he’s also taken to bringing gumbo bars to peoples’ backyards, or a seafood boil to their front yards.

“It feels like I’ve been making gumbo since the dawn of time,” Ball reflects. “My grandmother taught me, and my mom. They were both phenomenal chefs.”

One of Ball’s extended family members, a chef-turned-pastor in Baton Rouge, has given the thumbs up to his take on the Gulf’s best-known dish.

“I always jokingly tell people, ‘He says it’s a good bowl of gumbo – and a pastor can’t lie,” Ball chuckles.

Ball was on-hand for cooking duties at last year’s Crawfish and Catfish Festival. His experience with that crowd has made him excited for the next round of action.

“I’m looking forward to seeing some of my folks, because we did capture quite a bit of a following from people who are from Sacramento,” he notes. “So, I’m looking forward to re-connecting with them and feeding them again. I always tell people, ‘If I’ve fed you twice, you’re part of the family.’”

Over the years, as Sue has hosted her various celebrations, she’s gotten more adept at spotting the creative links between Sacramento’s river city and the river city that she grew up in.

One local chef that Sue thinks represents the general spirit and the specific flavors of what she’s out to showcase is Tony Ransom. Having been raised around barbecue fanatics, Ransom spent the last twenty years working as a chef in a number of well-known Sacramento dining hubs. Recently, when the pandemic brought restaurant life to a standstill, Ransom’s son, Jahi, encouraged him to launch his dream of running a food truck.

“He kept talking to me about doing my own thing,” Ransom remembers. “He knew that the idea was a passion of mine.”

Six months ago, Ransom officially unveiled his truck, Soul On A Roll Sac. He says that the inspiration for its menu came both from his uncle, whose nickname was “Little Rib,” and his memories of growing up with his mom.

“It’s a truck that’s meant to bring back all the soulful dishes I grew up loving,” Ransom stresses. “When I was young, I would wake up on the weekends and smell mom’s cooking, and she’d have soul music playing all through the house – and when you heard that, and smelled that, you knew the family dinner was on.”

What Ransom’s been making has already grabbed attention: The Sacramento Bee named Soul On A Roll the No.1 food truck at the California State Fair. Then, the Fair itself handed him a bronze medal for his Cajun chicken sandwich. Food writers have also been gushing over his bayou classic po boy, which features shrimp, crawfish and fried alligator. Not surprisingly, the poy boy is one of the dishes that Ransom will be serving at the festival. He’ll also be ladling out his popular jambalaya, along with loaded voodoo fries and his own special spin on crawfish etouffee.

“I’m bringing all my number ones,” he promises. “For me, it’s about getting people fed. We just like soulful flavors, and that is what we’re going to bring to you. It’s also important that people understand that ‘Cajun’ doesn’t always mean spicy. So, there’s food for everyone to experience.”

In addition to Chef Ransom and Chef Ball, Sue is also excited that the event will include the cooks from Louisiana Heaven, who’ll be serving a number of comfort food dishes that feature alligator, frog legs, catfish and lobster.

“I was raised in a tradition where cooking is an act of love,” Sue says. “And at this event, we’ll have a lot of grillin’ and chillin’ going on. Really, the food is the key. That, and the atmosphere.”

There will also be – drinking. The bar offers an array of cocktails, from New Orleans hurricanes and Mardi Gras margaritas, to Crawfish Bloody Marys with pickle juice, pickled okra and a red claw-snapper on top. Anyone who’s been to one of Sue’s events before can bet it will feature her signature drink, the Fire on the Bayou – a fusion of is lemonade, tea and Fireball whiskey.

But beyond steaming food and lovely liquor, Sue’s creative get-togethers are musical at their core. The upcoming weekend will be extravaganza of live jazz, blues, zydeco and funk. Sacramento’s Element Brass Band, Blind Lemon Peel, Zydeco Flames and Michael Jeffries’ BeafunK are just a handful of the 18 bands that will make an appearance.

“I always say, you’ll come for the food, but you’ll stay for the music,” Sue mentions. “We do take you home, from the bayou to Bourbon Street. And this year we’re also happy to have what we’re calling a brass band throwdown. It will be a competition with five brass bands … You won’t just be smelling New Orleans and tasting New Orleans, you’ll be dancing to it, too.”

Given how closely the concept of family is entwined in Sue’s ethos, she’s added some unique activities for the kids lounging inside her Louisiana zone. Those include a bounce house, some catch-and-release fishing, and a crawdad race that is reminiscent of area’s old jumping frog races.

With four-decades of experience being a far-from-home culture bearer, Sue says she’s learned plenty of lessons along the way, to the point where she’s reached a zenith for dreaming up exceptional events.

“I see a festival in my head before I ever sell a ticket,” she muses. “The biggest thing I know is to stay true to what I’m doing. Living this kind of a culture is a real enhancement, that’s why I’m sharing it. And, personally, I try to live it every day.”

The Crawfish and Catfish Festival is Sept. 10 & 11 from 11 a.m. to 8 p.m. at Southside Park in Sacramento. General admission tickets are $20. A full schedule of events and tickets can be found here.

Be the first to comment on "River visions: Louisiana Sue’s epic quest to make Sacramento another city that care forgot"