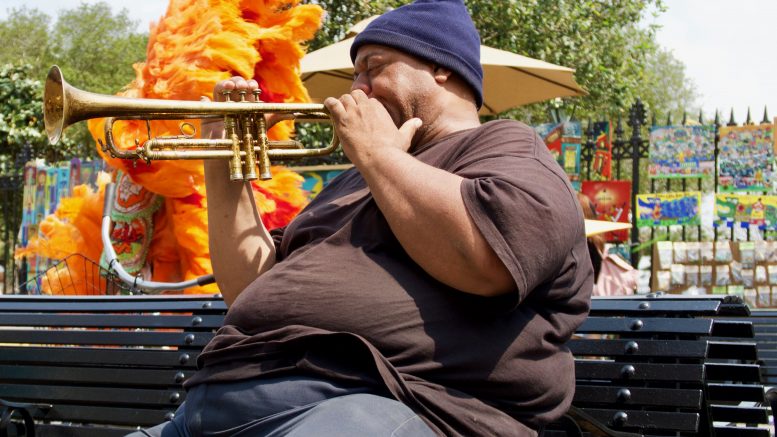 Strangers have always been drawn to New Orleans. Anyone who’s seen it knows why: Every corner of this early Spanish-French port is baptized with a stunning Afro-immigrant mark of energy – those gritty, blasting trumpet sounds and the roiling trombone calls that echo from old doorways.

Jazz is an art form stirred in America’s afterbirth, the first music that really screamed back at the world. The city still breathes jazz all through its downtrodden majesty. At dawn you can walk along the Mississippi River, watching an apricot blush in the sky throw long, flaming rails on its muddy glass before the aged riverbanks pass St. Peters Street, turning for Congo Square, the place where it all started. The place where brass bands continue to call from.

Bourbon Street may be the most famous avenue of the French Quarter, but it’s hardly the most stylish. Today, Bourbon Street is a gaudy carnival of the grotesque — packed with cheap souvenir shops, not-so-gentlemanly gentlemen clubs, dime store daiquiri bars and loud, lumbering frat boys who vomit on every corner. A more genuine taste of the Vieux Carre’ can be found on the spacious lane east of it, Royal Street. Here, the hurricane doors are painted bright and the chicory coffee is brewed strong. This is a whole different French Quarter. Lined with art galleries, dangling flowers and ornate caged balconies, Royal Street feels like a timeless doorway back to the heights of Creole culture. The Royal House Oyster Bar is a carefree stop on an upper part of that avenue, a place to relax while eating jambalaya topped with blackened shrimp nearly purpled with sandy layers of textured spices, all of which brings that cutting Cajun touch that forks its warm flavors through shellfish from the Gulf of Mexico.

The novel “Dinner at Antoine’s” captured how alive this part of the French Quarter was with culinary treasures even in the 1940s; and that heritage still continues within the dim Victorian corners of establishments like the Bombay Club, where the waiters bring out seared steaks slathered in Maitre D’ butter and demi-glace. It’s the kind of hulking perfection that might just stop one from getting a plate piled with sin-soft powdered beignets at Café Du Monde the next morning. But, maybe not.

For visitors, the true spell of Royal Street comes while walking at night, passing under angel busts hidden in ebony handrails and twisted specters of French refinement. The avenue’s most unusual vision waits in the back courtyard of the St. Louis Cathedral, where, after sundown, a lone floodlight aims directly at its statue of Jesus – casting his triumphant hail like a black, dripping candle all up the cathedral’s contours from the 1800s.

Walking Royal Street drums up an appetite for both food and atmosphere: Thankfully its clutter of antebellum elegance eventually leads to one of the city’s hidden garden patios. If you can find it, Café Amelie is known for its supple crab cakes crowned in citrus drizzle, along with crawfish pasta enlivened by spicey cream and Parmesan dust. Café Amelie’s dishes are surpassed only by its eerie evening ambiance. When night falls on the Mississippi, you can sit in the café watching fountains, palm trees, candles and torches pant against its colonial brickwork, all seemingly alive with the quarter’s long Caribbean connection to Havana.

New Orleans created jazz, America’s only original art form, and Preservation Hall is a tribute to the rough and weathered rooms that spawned that legacy: It was inside similar halls on nearby Rampart Street that Buddy Bolden and King Oliver cleared a way for the genius of Louis Armstrong, who emerged from “the back side of town” to change jazz with the manic revelations of self-expression that soared from his trumpet. Armstrong conjured a free force that permeated songs like “Weather Bird” and “Mahogany Hall Stomp” with staccato blades of sound revealing time-manipulation from the deepest emotional rhythms of the spirit.

Preservation Hall looks much like the city’s old structures did between 1900 and 1930, a threadbare room with cracked, pealed walls and two yellow lamps that hang like cat eyes from ceilings fans. Today, patrons who visit can see trumpeters such as Wendell Brunious, whose crisp, clarion command, agile accents and swelling sign-offs are the essence of the early tradition. Another musician often at the hall is Freddie Lanzo, widely considered among the Big Easy’s greatest tailgate trombonists. Tailgate “bones” merge the soulful essence of Delta Blues with the elephant attacks of turn-of-the-century parade bands. Lanzo lends a grinding grace to this trombone style, blowing with both salt and silk across his low-throated slides.

As an art form, New Orleans jazz continues to evolve, especially down the way from Preservation Hall on Frenchmen Street. Clubs from the Blue Nile to the Spotted Cat host dynamic musicians. The most famous might be Kermit Ruffins, who,  clad in his fedora and holding his silver trumpet, tends to blast the stage open with the irreverent poetics of his ever-higher notes. These clubs are also haunted by the snake-charming fountain of Dr. Michael White’s clarinet, its exotic hum sharp, smooth and free – often pouring like nectar over the gritty mute-stops of trumpeter Nicholas Payton. When I first started visiting Frenchman Street, the late piano master Henry Butler was still occasionally playing on it. I’ll never forget the grace he brought to hard-rolling and hammering on ivory, nor the crystalline percussion to his solos and a near-mysticism to how he drove notes into his band’s bass punches and kick-strikes.

Of all the jazz stops on Frenchmen Street, Snug Harbor is one of the main institutions. Before the pandemic, you could usually catch the late Ellis Marsalis there, the elegant patriarch hunched over his piano, wearing a Ferrari-red vest and Mardi Gras tie that spoke to his hometown roots. The Ellis Marsalis Quartet was a kind of throbbing jazz prayer. During a performance, the group would follow the elder statesman’s rippling flurries on the piano. They reacted to his bright chords. They accelerated on his fluid runs. They improvised with the sound of his mood. For fans new to the art, it was a virtual clinic on how a pianist’s technique can spark the full-throttle contemplation of a band. Ellis Marsalis was reportedly one of the first well-known victims of COVID.

The most famous street in New Orleans is named after the French aristocrat, Philippe Duc d’Orleans, of the House of Bourbons. Philippe was a man of excess and debonair fop of debauchery, and in some ways his spirit still surges up the avenue that marks his memory, somewhere amidst the spilling drinks, lifting shirts and hurled, airborne beads.

Yet there is more to Bourbon Street than just delirious disintegration: It’s an avenue for boogying to Second Line parades, as well as a historic gateway to voodoo. It’s also home to restaurants like The Red Fish Grill, a collision of flare and casual refinement situated near the business district. Top choices at The Red Fish include the barbecued blue crab claws, which are smothered in smoky butter-gravy and highlighted with chive on succulent white meat. Chances, are if you’ve heard of The Red Fish Grill, you’ve heard of its smoldering double-fudge bread pudding, which is nearly translucent under an oven-crisp top, white chocolate ganache and dark chocolate almond bark.

Eating in New Orleans is dangerous if not accompanied by a lot of walking. A southbound detour from the 100 block of Bourbon Street onto Royal Street can skip you around the worst of the famous corridor’s slum-loving. If you return to Bourbon at the corner of Toulouse Street, you’ll encounter a tantalizing dining hub called Saints and Sinners. A cave of red leather walls, ruby-devil curtains and dingy gold rails, this flashback to the days of Storyville is all crimson and copper curiosity. And its menu has a secret Cajun weapon in the form of the homemade crawfish pie. The dish hits with cutting cyan gradations soothed by oozing, oily pepper juices: It’s a recipe subtly spicier than the vintage photos of the turn-of-the-century “restricted district” that Saints and Sinners is paying homage to.

Waiting down the way is Lafitte’s Blacksmith Shop, a sunken shape from 1760, which glows at night in the swampy Neptune neon of Bourbon Street’s ambiance. The bar is associated with Jean Lafitte, a pirate who once navigated in the Caribbean waves and Louisiana bayous. These days you can enter Lafitte’s tavern through its street-side hurricane doors, grabbing a table to survey the faces along its calico rock walls – faces dimly lit by antique lamps and the hearth’s crackling firelight.

From streetcars to garden graves

In New Orleans, the full Tennessee-Williams effect is mostly felt on Saint Charles Avenue. This section of the city was born when American southerners arrived after 1804; but the French still have their mark here by virtue of the Lafayette Cemetery, one of the nation’s most hypnotizing works of funerary art: The Lafayette is a walled city of moss-smeared stone — a cramped quarter of tiny Gothic shelters of the forgotten.

Visitors will notice pillared, double-gallery mansions of the Garden District surrounding the cemetery. It’s said that here, on Prytania Street, F. Scott Fitzgerald penned his first novel while staying in a room that overlooked the crowded row of crypts touched by storm breeze. One of New Orleans’ current writers, Andrei Codrescu, has mused about Fitzgerald “wincing from last night’s gin, looking down on the little houses of the dead.” Today, some of the bars on St. Charles Avenue will mix a cocktail called The Fitzgerald, which is a liquid bomb of Gin, lemon juice, simple syrup and Angostura bitters.

The St. Charles streetcar can bring you back to the French Quarter, its windows passing as many pieces of invisible history as visible ones: You spot where the bawdy bordellos of Storyville were demolished in the 1930s; where the ramshackle wood house Louis Armstrong grew up in was plowed away; where the recording studio that produced America’s first rock and roll album in 1949 was converted into a laundry mat; where the buildings that inspired Tennessee Williams along Elysian Fields continue to be torn down. But despite these mistakes, most of the markers for New Orleans’s roaring, rebellious ride through the American experience are still standing. They’re tributes to a constantly re-emerging cultural renaissance that fuels the imagination with the possibilities of things to come.

Scott Thomas Anderson is also the host of the ‘Drinkers with Writing Problems’ podcast, Episode 3 of which was written and recorded in New Orleans.

Be the first to comment on "Mardi Gras travel: Shining brass and broken glasses in New Orleans"