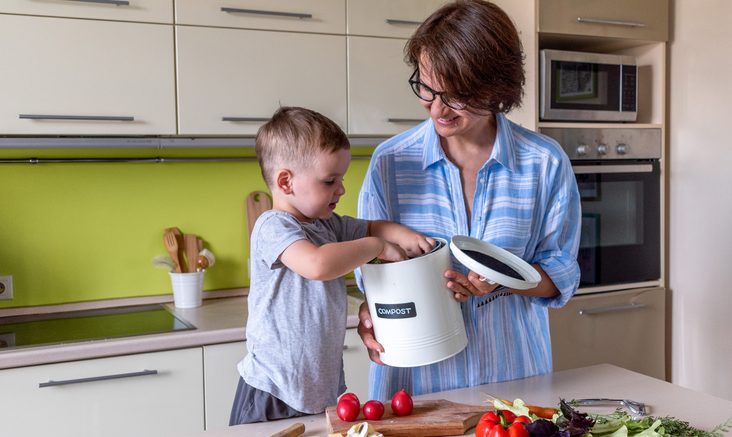 Aspirational goals are by their very nature important for tackling large social problems, like climate change, disappearing landfills and people going hungry in California. And when you can combine all those issues into one legislative bill—SB 1383—it is going to pass and become law. Because who can argue with an environmental win-win that will reduce organic waste—primarily uneaten food—by 75%, thereby significantly cutting dangerous greenhouse emissions, and also rescue 20% more food for Californians who need it?

But it is often difficult to make aspirations a reality, especially in cities and counties across the state with varying degrees of resources and populations. For hard numbers on how the implementation of SB 1383 is really going, we turned to Emily Coven, founder of Recyclist, which developed software that tracks the waste stream.

If you assess implementation in terms of how many municipalities have SB 1383 fully implemented (or close to it), I would say it’s not going so well—there’s still a ton of work to be done across the state. But if you look at implementation in terms of overall trajectory, I’d say it’s going really well. The amount of effort being put in across the state to solve these hard problems is phenomenal. Not only do we hear (from) a new city just about every day, but even among the customers we’ve been working with for years, there’s a palpable difference in the level of scrutiny with which municipalities are looking at their data and using it to plan their compliance efforts, which is really exciting to us data geeks at Recyclist.

SB 1383 has, without a doubt, shifted the focus of many municipalities and lit a fire to effect real change. I see this shift as a huge win for the state. Ultimately, SB 1383 is about addressing short-lived climate pollutants, and across the state, municipalities are working full-steam ahead to do exactly that, which is all that we can realistically ask of anyone.

The biggest challenge we hear about is infrastructure. Unfortunately, we’re just the software people and don’t have any answers there, but I know you’re talking to the experts who do and look forward to what they have to say!

Your company is working with multiple municipalities using your unique software to collect data. What kind of increases have you been seeing each year?

We have the unique privilege of being able to run reports on anonymized data aggregated from all users of the Recyclist Program Tracker, which is currently about one-third of the municipalities in California. From that data, there is a clear and undeniable trend toward more and more diversion happening every month.

We’ve also seen a notable uptick in outreach activities being logged in the Program Tracker, and while we cannot prove causation versus correlation (yet!), we can see that there’s a clear connection between increased outreach efforts and increased diversion. So while 100% compliance remains more of a goal than a reality for many municipalities, every day there is significant tangible progress being made towards that goal.

Do you think these increases were impacted by COVID-19?

COVID-19 definitely had an impact, but in different ways in different municipalities—there was no singular primary impact on SB 1383 implementation as far as I’m aware. For instance, we work with some municipalities that were trying to get ahead of the game by doing major organics roll-outs in 2020 and 2021, so COVID-19 had a major impact on their ability to do the in-person visits necessary for that work.

For other municipalities and haulers, the dip in commercial waste volumes had an impact on their budgets. And for everyone—and this is probably the impact we hear about most—the public appetite for some of the new services and rate increases necessary to implement SB 1383, especially in the business community, has been significantly impacted by COVID-19.

But it’s not all bad news. On the upside we did see a lot more community engagement in learning about recycling. Especially during the first few months of COVID-19—when the entire country seemed to go on a joint spring cleaning binge—we saw a notable increase in traffic to the Recyclist Ultimate Recycling Guide, an online guide used by municipalities across the country to provide information about reducing, reusing and recycling in your local community. While crazes like bread-baking got a lot more media attention, we have a trove of data that shows that Googling for recycling information was another unexpected new pandemic pastime.

In cities that are having the greatest advances, what do you think the key to their success is?

Time and money—isn’t that always the answer?! Seriously, though, those are the major factors we see. Time, in that the municipalities that started working hard on SB 1383 a few years back are in a much better place than ones that waited until 2022 to start digging in. Money, in that there’s a huge variety in resources that municipalities across the state can allocate to implementing SB 1383. So the cities that have more staff, and can afford more consultants, are doing better.

The good news here is around the SB 1383 Local Assistant Grant Program, which is providing $57 million to municipalities to support SB 1383 implementation. That’s huge. We’ve heard from many cities seeking help with their SB 1383 data and now are able to access that help more easily due to the grant program. The League of California Cities is calling on the state to build on the initial grant funding with an additional $180 million in the 2022-2023 state budget, which would help more cities advance further faster.

Ice cream, hands down. Pie is second—we even served pie at our wedding, which tells you all you need to know about where cake ranks.

Dog all the way. That being said, we don’t have a dog, despite my two kids begging on a daily basis, because we travel too much. (Or, according to the kids, because we are mean.)

No decision. I live in the mountains but spend as much time as I can at the beach—gotta have them both!

San Jose is a model of how collecting organic waste may look across California—even though challenges remain.

Dr. BJ Miller is the keynote speaker at an end-of-life conference this Friday in Sacramento