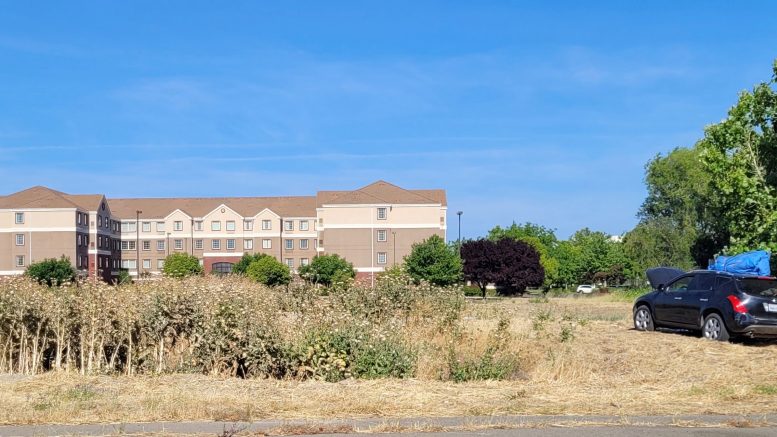 Staybridge Suites in Natomas was once a landing spot for business travelers freshly arriving from Sacramento International Airport. Now with $29 million in funding from Homekey, a statewide program aimed at helping to develop more housing for California’s unhoused people, the hotel has a new name and purpose.

Instead of serving busy professionals, the newly dubbed Vista Nueva is being redeveloped into 110 converted suites and essential services for about 300 tenants, all as a means to transition out of homelessness. According to Angela Jones, public information officer for the Sacramento Housing and Redevelopment Agency, construction is in the early stages.

Homekey, a $1.45 billion program, provides grant funding to cities, counties, housing authorities, tribes and other public entities to convert motels, hotels and other structures into permanent supportive housing to help address California’s homelessness crisis. An estimated 161,548 in the state are without secure housing, according to a 2020 report from the United States Interagency on Homelessness.

In February, Gov. Gavin Newsom announced that another $24 million in funding would go to Sacramento’s Housing Authority. The City of Sacramento, working with SHRA, will apply those funds to convert the Best Western Sutter House downtown into permanent supportive housing. The new site, renamed Central Sacramento Studios, will provide 92 units for people experiencing homelessness.

Bob Erlenbusch, director of the Sacramento Regional Coalition to End Homelessness, estimated that the upcoming count would show that about 12,000-15,000 people in the county are experiencing some form of homelessness. With 40 years of experience working with those on the streets, Erlenbusch said that systemic racism contributes to a population of indigenous and Black unhoused people that’s four times that of white and other races.

Those who experience a compromised housing situation often do so as a result of circumstances beyond their control: foster youth who leave the foster system without a gateway into housing; women and children escaping domestic violence; lesbian, gay or transgender youth whose families eject them from the home. According to Danielle Foster, housing policy manager for the City of Sacramento, people with mental health and substance abuse issues make up a large percentage of the homeless population. People who pay over half of their income in rent seek affordable housing assistance as well — a population that includes retail workers, service workers or teachers.

While the population of unhoused in Sacramento is growing rapidly, “Government is slow,” as Sacramento County District 2 Supervisor Patrick Kennedy acknowledged earlier this year. The issue of a rising population of unhoused Sacramentans is only compounded by a lack of housing available to lift those affected out of life on the streets and into permanent, transitional or affordable housing.

An aging supply of housing

SHRA officials say that a challenge the organization faces is that many of the properties, buildings and assets designated for publicly subsidized housing have become obsolete or prohibitively costly to maintain. Public Information Officer Angela Jones explains that the current housing market makes it difficult, if not impossible, for low-income families to afford housing, even with a rental assistance voucher.

“There remains a critical shortage of available housing options for people who are ready to transition to permanent housing,” Jones said. “The housing stock is rapidly aging and for the last 17 years, the federal government has not adequately funded public housing programs. These programs require applicants to apply to a waiting list which can sometimes take months or years before being eligible to receive a housing opportunity depending on the availability of a unit or a voucher.”

Jones added that a collaboration with the city has allowed SHRA to partner with developers to create long-term housing through Homekey. She added that if additional funding opened up through Homekey, SHRA would apply to support additional projects. Providing new housing is SHRA’s highest priority for funding, Jones stressed.

Homekey projects are required to have units set aside to answer specific needs of tenants. For example, the Vista Nueva project in Natomas, which is being developed by the nonprofit housing developer Jamboree, has 10 units designated for families with at least one child, 17 ADA compliant units and an additional 90 units with supportive services attached.

Homekey-funded projects like Vista Nueva provide tenants with serviced-based amenities vital to their quality of life. Foster said that — while most affordable housing projects have some level of support — permanent supportive housing has additional services built in like mental health support, substance abuse management or access to health care.

“The biggest distinction between affordable housing and permanent supportive housing is that — for supportive housing — there’s a higher level of service for the clients focused on housing retention,” Foster noted. “Not just the affordable rent, but also additional coaching just to make sure that they can transition and retain housing over time.”

Jamboree has a portfolio of nearly 80 properties and a network of volunteers, after-school programs, onsite service coordinators, and education, financial, health and community-building programs. Jamboree’s website reports that over 90% of the residents in their properties have avoided returning to homelessness.

Homekey grew from the state’s previous incarnation, Roomkey. That program was an emergency response by the state in March 2020 to provide housing options for people experiencing homelessness at the onset of COVID-19.

At a February meeting of the Sacramento County Board of Supervisors, it was decided that due to a declining need for COVID-19 prevention, funding for Roomkey would end in March. Though the closure of Sacramento’s three hotels funded by the project was gradual — its last hotel is a Comfort Inn scheduled to shutter its doors on May 31 — hundreds of the tenants with housing in Roomkey funded hotels have had to seek new housing options.

The Sacramento County Department of Human Assistance, Sacramento Steps Forward and the city have been coordinating efforts to help tenants of the three Sacramento hotels formerly funded by Roomkey in an effort to prevent tenants from re-entering homelessness. Closures of the three hotels were scheduled to close gradually beginning March 15, with the last site set to shut its doors May 31.

Homekey, on the other hand, seems to have widespread support. The program’s success has spurred U.S. Sen. Alex Padilla, of California, to legislate for $45 billion annually (for 10 years) in federal funding to not only to continue and expand projects like Homekey, but to fund other programs assisting unhoused people. Foster said that at least one additional round of funding for Homekey is expected to roll out later this year, with the possibility of Homekey funding continuing moving forward.

“This has been a successful program,” Foster said. “And the governor — who created it — has been quite supportive of its continuation.”