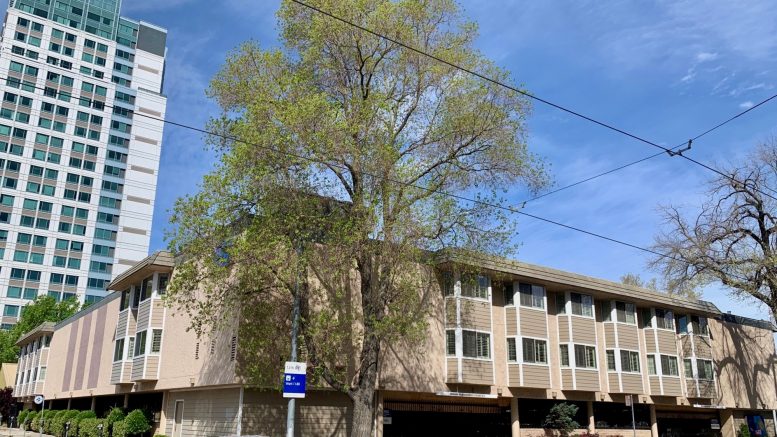 The site of a new hotel conversion for supportive housing on H Street in Downtown Sacramento. Photo by Scott Thomas Anderson

A Best Western hotel in Downtown is being converted into permanent housing for people escaping the streets under California’s new program, Homekey.

The Best Western Plus Sutter House, located at 1100 H Street, will be converted into permanent housing following a $23.9 million grant awarded to the Sacramento City Council last January. The new project will be called the Central Sacramento Studios. It will move forward as a collaboration between the City, the Sacramento Housing and Redevelopment Agency, and a developer called Danco Communities, according city officials.

Dr. Susanna Curry, an assistant professor in social work at Sacramento State University, said that these housing projects are cost-effective for Sacramento.

“Permanent supportive housing is meant to provide for someone who is chronically homeless,” Curry explained. “The idea is that getting someone into a place where they can stay long-term and have wrap-around support will prevent additional costs to the system when someone is sleeping outside. It is addressing homelessness and preventing further problems for a person living outside.”

“The idea is that this is permanent housing, so that you are able to stay as long as you need and want – nobody kicks you out,“ Valenzuela noted. “The target is people experiencing homelessness. We have a certain number of rooms set aside that are going to get mental health services, funding, and special case management through the county.”

Jamal Stanford, a Sacramento resident who provides free haircuts for unsheltered people in Cesar Chavez Plaza, said such housing projects are badly needed in the community.

“These people don’t have to be here on the street,” Stanford said. “The idea that there is something where they can fill out an application and maybe get a place is great. It gives them opportunity and hope.”

Specifically, 15 of the 92 units will be devoted to people in need of mental health services. Sacramento County will be responsible for providing that treatment and support.