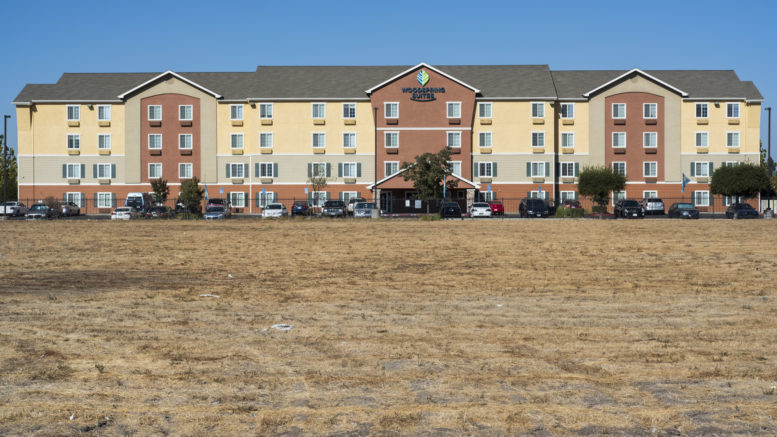 The Woodsprings Suites, just east of Meadow View and north of Valley Hi, will soon be reimagined as the La Mancha Project, a new attempt to provide long-term housing for those experiencing homelessness. (Photo by Patrick Hyun Wilson)

The 100-room La Mancha Project will not be a shelter, but a long-term place to call home

Four months after Gov. Gavin Newsom announced a $600 million program to convert hotels and motels into permanent supportive housing for Californians experiencing homelessness, the city of Sacramento finalized its first attempt to leverage those state and federal funds.

On Oct. 13, the City Council approved the Sacramento Housing and Redevelopment Agency’s plan to buy the Woodspring Suites hotel near Meadowview and turn it into the La Mancha Project, where more than 100 people currently living on the streets will be able to have a home for at least a decade. Many of the individuals who will move there are those most at-risk for a deadly outcome if they contract COVID-19.

The La Mancha will mark the city’s maiden voyage with California’s relatively new grant program, Project Homekey. That effort grew out of a program in April called Project Roomkey, a state-led attempt to get the people who were most in peril from the coronavirus out of homeless camps and into hotel rooms.

SHRA is partnering with Mercy Housing to use a $14.5 million state grant to purchase the Woodsprings Suites complex on La Mancha Way, which was only constructed in 2009. The city will allocate an additional $2 million from its coronavirus relief fund, $2 million from its homeless housing assistance fund and $1.6 million from its community development block grants to finance 10 years of operating services. Additionally, the county Board of Supervisors is expected to allocate $2.3 million into the project from the county’s Mental Health Services Act funding, which in turn will pay for having eight cases managers on site to help connect residents who have mental health challenges with the supportive services they need to remain housed.

For Mayor Darrell Steinberg, the original architect of the Mental Health Services Act, the county’s participation in funding the La Mancha shows it recognizes a shared responsibility for the homeless crisis in the South Sacramento area.

“The fact that money is coming from the county to help us in the city, when we know that mental health is a big piece of addressing systemic homelessness, is a really good advance here,” Steinberg said before the vote.

Rent at the La Mancha will be kept at or below 30% of the area median income, which is the income category most likely for someone living on Social Security or SSI to be able to afford rent and living expenses.

Outgoing Councilman Larry Carr, who represents that part of Sacramento and has had grave misgivings about other homeless projects in his district, had nothing but praise for the La Mancha.

“I’ve talked to all of our neighborhood associations, and we are all in support of this site,” Carr said at the meeting. “It’s a perfect, ideal location.”

Carr added that another reason he was confident in the project was that SHRA had assured him it would focus on recruiting the La Mancha’s residents from people living in homeless camps in that part of the city, as well as local veterans and women currently staying at the homeless shelter at South Sacramento’s Pannell Community Center.

SHRA Executive Director La Shelle Dozier reiterated her team had an outreach plan for all of those areas and stressed that the La Mancha will be a true living facility and not a shelter.

Currently, the county and city’s Continuum of Care spends roughly $20 million a year in federal dollars to provide permanent supportive housing to formerly homeless individuals, money that stabilizes those who’d been at the highest risk of dying on the streets and—without the help—would likely be homeless again within days or weeks. The program has been successful enough that local officials have long searched for ways to expand its permanent housing strategy to the larger homeless issue. The La Mancha, as Dozier and her team describe it, is a step in that direction.

“The good thing about this is it’s immediate housing, it isn’t transitional,” Dozier said. “So, people who are in other situations can actually move in and this will be their permanent location. We’re really excited about that.”

Be the first to comment on "Spurred by COVID-19, Sacramento green-lights its first Operation Homekey hotel conversion for the most at-risk living on the streets"