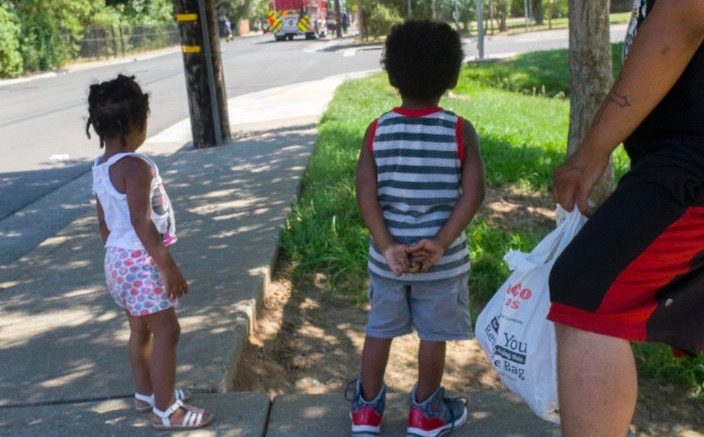 Following the horrific mass-causality event in Downtown Sacramento on April 3, community interest in meaningful gang-prevention initiatives is at an all-time high. The following in an excerpt from SN&R’s cover feature “The Watch,” which involved one reporter spending a summer in the South Sacramento neighborhood commonly referred to as the Fruitridge Finger. The full story of “The Watch” can be read here.

June 22—the hottest day of the year so far in Sacramento. Richard Nelson leans back against a sink in the corner of a former classroom. His tall frame is towering against a shield of window blinds. Nelson watches his friend of 50 years, retired college president Dr. Eric Gravenberg, speak to a group of high school students. Nelson and Gravenberg are the founders of Hawk Institute, a mentoring program for at-risk teens. The initiative came into being seven years ago after a murder inside the Finger brought suffering straight into their own lives.

Gravenberg’s nickname with the young faces is “Dr. G.” Sheltered inside an air-conditioned room of the Collaborative, he walks them through a wide array of job-seeking skills. Every set of eyes is locked on him.

“I know that what we teach you is in competition with a lot of other things in your life,” Gravenberg admits in a calm, even voice. “There’s family issues; there’s so much pressure.” He nods a little, his pitch dropping. “It’s deep. I can see it when you walk in the room.”

Nelson can see it, too. For him, building this nonprofit has meant catching the clues that a teen is living with four siblings in a one-bedroom apartment. He knows the telltale signs of a kid struggling to find clean clothes. He notices when the high schoolers eat only half of the meals they’re provided, squirreling the rest home for waiting, hungry mouths. These youngsters are the future of the Finger and its surrounding avenues.

Nelson’s had a decades-long view of how they were born into their situations. In 1972, he was the manager of Oak Park’s Bank of America. It was a time when Fruit Ridge Elementary was still packed with kids and people mainly called the neighborhood the Pocket. And then rock-cocaine tumbled through the streets like a poisonous wave. Lawmakers’ response to the epidemic tore the social fabric even more. South Oak Park, the corners of Fruitridge and lanes of Elder Creek were hit with what Nelson remembers as a hard downturn.

“When you look at the drug infiltration throughout America, that whole episode took out all of these fathers, who became either incarcerated or addicted,” Nelson recalls. “There’s no father. There’s no grandfather. There’s no uncles. … You’ve got the blind leading the blind.”

In 1986, Gov. George Deukmejian appointed Nelson director of small business for the California Department of Commerce. As a finance expert, Nelson knows what yearslong disinvestment does to neighborhoods like the Finger. Spiking incarceration rates lead to high unemployment. Household incomes drop. Vacant buildings get flipped into cheap, transitory rentals. Violence starts escalating. Businesses leave. Public improvement projects get steered to other areas. Cornerstone merchants get displaced by legions of liquor stores. The spiral goes on and on.

Nelson may have understood how community collapse works, but no parent would have imagined what life around the Finger had in store for his own family.

On December 15, 2010, Nelson’s 30-year-old daughter Monique was bringing her baby to get his picture taken at a strip mall on Stockton Boulevard. It was the kind of Tuesday afternoon when $5 haircuts for kids often had Fly Cuts barbershop filled with toddlers. Monique was leaning over her 2-year-old in his car seat when a group of men began facing off nearby. According to court testimony, their feud boiled down to a $40 robbery, some missing marijuana and a lost gold mouth grill. Seconds later, pistols, a TEC-9 and an AK-47 were spitting bullets through the air.

Monique threw her body over her baby to protect him. It was the last instinct she would ever have.

“Out of that pain, Eric and I got together and said, ’You know, this just doesn’t make any sense,’” Nelson remembers. “We decided there was a whole bunch of conversations that needed to be had, particularly with black males.”

A few years later, Nelson and Gravenberg were standing in front of not just young black men from South Sacramento, but also Latinos, Asian-Americans and every other kind of kid from the neighborhood. The program they’ve designed for Hawk Institute emphasizes financial literacy, academic achievement and critical thinking. It’s become a key partner with the city of Sacramento’s anti-gang task force.

“We put a big emphasis on fatherhood,” Nelson says. “We talk about how, even when relationships end, you don’t walk away from your kids. That’s the only way we’re going to start changing that dynamic.”

The temperatures keep lifting outside as Gravenberg shepherds the teens’ imaginations through creating a small-business plan. He’s also helping them apply for Mayor Darrell Steinberg’s new Thousand Strong Initiative, which could give each youngster a paid internship. The participants are laughing and offering upbeat lines of encouragement to each other. Nelson and Gravenberg hope they’ll hold onto those feelings, because they can’t stay in this room forever.

Two hours later, the thermometer’s red line makes a blood-bump up to 108 degrees Fahrenheit. A homeless man with two small children trudges though Jack Davis Park, stopping by the memorial to Porraz, who was killed by a bullet to the face last September. His voice is drying to a whisper as he looks around for water. A stranger comes onto the grass from a liquor store on 14th Avenue. Naked but for his grimy pair of shorts, the stranger starts dancing around: He flashes teeth-grinding face tics—tremors running through his fingers as he picks at his cheeks. On the park’s handball court, a woman is tying off a rubber tourniquet on a young man’s arm. They’re ready for the needle. Neither looks up when a car rolls by.

A few blocks south, a new murder tribute has gone up. Kenneth “Cheech” Armstrong Jr. is hovering over a makeshift bundle of candles at the corner of 42nd Street and 23rd Avenue, where Jovance Lewis died against his chest. Huffing against the heat in a sweat-drenched shirt, Armstrong keeps muttering how he was almost killed in the same instant.

On June 16, Armstrong, Lewis and two other men were standing under the eave of the corner liquor store when two 15-year-old males approached. Armstrong doesn’t talk about the words that were exchanged between Lewis and these boys. He just stands, swaying on his ankles, whispering that the teens pulled out guns.

“I was on the ground while they were shooting,” Armstrong chokes through his arid vocal chords.

Armstrong’s friend Anthony was hit in the foot. A neighborhood man called B-Town was drilled in the knee. Lewis took a bullet to the head. Moments later, a neighborhood musician known as June happened on the mess of blood and gore. June stands near the death candles, bumps of water studding on his bare chest.

“We’re in the sheriff’s area here,” June notes, “but it was actually a Sacramento police car that first raced by.”

Sheriff’s officials confirm June’s observation that a police cruiser was closer to the “187” murder call than their own units. They also confirm the arrest of two 15-year-olds.

June saw the Finger’s jurisdictional jumble on full display through the crime tape and evening light. But Armstrong isn’t meditating on which badges chased down the alleged killers. His bleary eyes keep drifting between goodbye messages scrawled on the liquor store wall and a dirty dog-shaped stuffed animal craning through the candles.

Be the first to comment on "Revisiting the Watch: In the wake of a numbing, gang-related murder, the Hawk Institute keeps pulling youth triumphs from the shadow of tragedy"