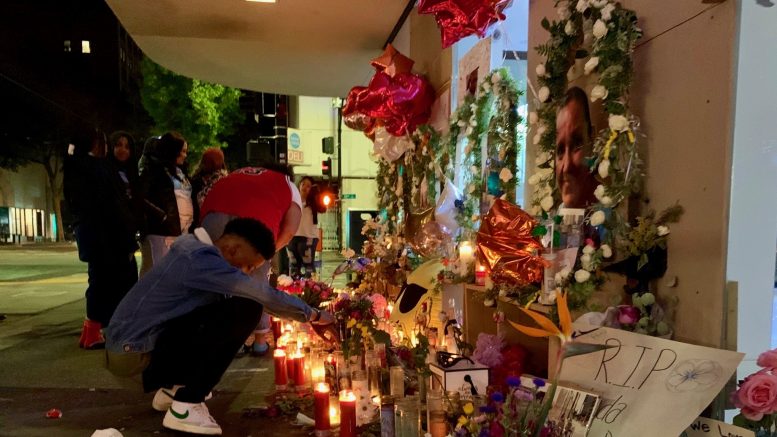 A slow return to the scene that changed everything

They just prayed their way through the wind.

It was the first Saturday night in Downtown since the unthinkable – 18 people shot in a matter of seconds – and a group of mourners hugged in close near a tribute to the faces that were lost. They gathered at the corner of 10th and K, a few struggling to light candles against the evening’s dry, relentless gusts whipping down the way. There were already hundreds of candleflames flickering, blinking – somehow managing to survive the random whirlwinds of dirt and debris. The mourners ignored the windstorm. A few stood totally silent. Others stooped by the portraits, cigarettes trembling in-hand. And some were calmly knelt as they fought to light more candles – as they worked to add more fighting points of illumination against the darkness. The night’s red flag weather couldn’t stop them.

Across the street, there were no lines to get into the city’s most-popular night clubs. But it was still early. The door staff looked like they didn’t know what to expect.

It had only been a week since an uncomfortable understanding had taken shape. The national press corps parachuted into Sacramento mainly because it’s gotten so adept at covering that all-American phenomenon of mass shootings. For these news agencies, the pandora’s box was first opened 23 years ago in Colorado, and they’ve since evolved to be increasingly skilled at painting the nebulous evils that randomly fly out of it now and again. It’s nothing less than a style of horror art, at this point. But there’s no denying what went down in Sacramento was different. Unlike so many mass shootings – unlike most of the 19 events in California and almost all that haunt the nation’s psyche – this one wasn’t perpetrated by a deranged lone wolf with a ludicrous amount of firepower. It wasn’t carried out by a tortured incel who’d stumbled from the ranks of what Marc Maron calls “the army of unfuckable hate nerds.” The victims were not selected by a toxic employee-timebomb who’d popped off from the stress of his modern work environment. The dead and the wounded weren’t laid low by someone hearing voices, or talking to the Devil or his black labrador retriever.

Whatever it was that happened April 3, 2022, it came from Sacramento’s streets, from its neighborhoods. It wasn’t something, or someone, that picked Sacramento. It was Sacramento. And the city had been coming to terms with that for seven days.

Nowhere more so than in the Downtown entertainment district where it all happened.

The distinction between an arbitrary, hard-to-stop mass-casualty event, and 18 people getting shot in a rolling storm of street warfare, wasn’t lost on the servers, bartenders, cooks and clerks working in Downtown Saturday. Some would easily chat about it with customers: There seemed to be a vague acceptance that, if these shootings weren’t the indiscriminate result of one person’s broken mind, then they came from something wider and deeper – something more permanently engrained. That also means the chances of similar violent acts happening again are higher. It’s just an oblivious numbers game.

But given the stakes around their livelihood, Downtown’s hospitality workers had a more pressing question: When will people come out again?

All week rumors were swirling among Sacramento’s “Kitchen Confidential” world that bars and restaurants from I Street to the Handle District stayed largely empty. The Saturday crews in Downtown generally agreed that the previous night was a disaster.

“Last night, when I got off, this whole place was just a ghost town,” a bartender at Maya’s Kitchen told me. “My friend who works at Social said that they had actually done their last call at 11:45 p.m.”

He added, “I guess it could be this way for a while.”

To some extent, it’s a question of how the public defines what happened. There has already been some debate. During their initial hours of reporting the story, major media outlets took a controversial stance on how to frame the hospitalizations and the loss of life. As their news directors learned that the catastrophe involved five shooters – and that they could get a look at some instigators of the chaos through phone videos – they apparently talked themselves into a conundrum. The Los Angeles Times and The Associated Press both declined to call what had happened in Sacramento a mass shooting. Other reporters found this odd, inconsistent. As a rule, most newspapers refer to any gunfire spree that leaves more than four dead as a mass shooting. The Los Angeles Times later backed off, but the dust-up hinted at the various perspectives floating around, as well as what they could mean for the urban core.

It was also obvious to some Downtown workers that what’s effecting their jobs has become intensely political.

The three suspects now in custody on various weapons and assault charges are Smiley Martin, Dandrae Martin and Daviyonne Dawson. It’s only taken seven days for Smiley Martin to become famous in Sacramento. Friday night at sunset, residents at the dog park on 19th Street were casually sharing tales they’d heard of Smiley. They’d read, or they’d been told, that Smiley is a streetwise psychopath who embodies the most-vicious aspects of gang life, a man recently released way early from prison due to blind liberal naivety, even though he’d landed there for mercilessly beating his girlfriend for “not hoeing for him.” Where exactly the finer narrative stitches in Smiley’s jacket come from these days is hard to parse. What’s generally confirmed is that Smiley Martin has been arrested in the past for possessing machine guns and illegal mags, assaulting a Walmart employee during a robbery, and inflicting corporal injury on a woman. And Authorities have indeed said that Smiley was violently coercing a girlfriend into prostitution.

In May of 2021, Smiley tried to get paroled, but Sacramento County District Attorney Anne Marie Schubert wrote a letter to the Board of Prisons opposing that, describing the inmate as having “little regard for human life and the law.” The letter did the trick. Kind of. Smiley ultimately served less than half of his 10-year prison sentence simply due to the time-crediting system voters approved in 2016 with Prop. 57. Now, in the arena of California politics, Smiley is suddenly the poster child for those who believe progressive justice policies have run amuck. Schubert’s supporters are also using her read on Smiley’s release – in addition to her role in capturing the Golden State Killer – to bolster the DA’s candidacy for California Attorney General. The idea that Schubert might actually win is particularly galling to progressive thought-leaders in Downtown and Midtown Sacramento. So, the shooting has brought electoral fear and loathing with it, too.

But on Saturday night, as skeleton crews of drinkers filed into their favorite bars on K Street, such obsessions were far from what dominated the muted conversations. Mostly it was the irony of servers pouring drinks for their fellow servers from the surrounding businesses, since many were getting lots of breaks or getting off shifts early. Yet it would be inaccurate to suggest that the entertainment district was totally vacant. By 10:30 p.m. there were small lines in front of some places like Tiger and Dive Bar. Around 12:45 p.m., most spots that remained opened had solid signs of life. Members of what appeared to be a bachelorette party, drifting and veering around the avenue, moved like a platoon in cocktail dresses on a mission of illusion, doing what they could to mimic the whelps and booze-screams of an entire street that was partying.

Still, concern about the moment was real.

“Last night and tonight, this will be the slowest weekend we’ve had in like 5 years,” a bartender at Malt & Mash observed. “It’s going to be dead tonight, everywhere.”

1 Comment on "It was Saturday night: The shadow of death"