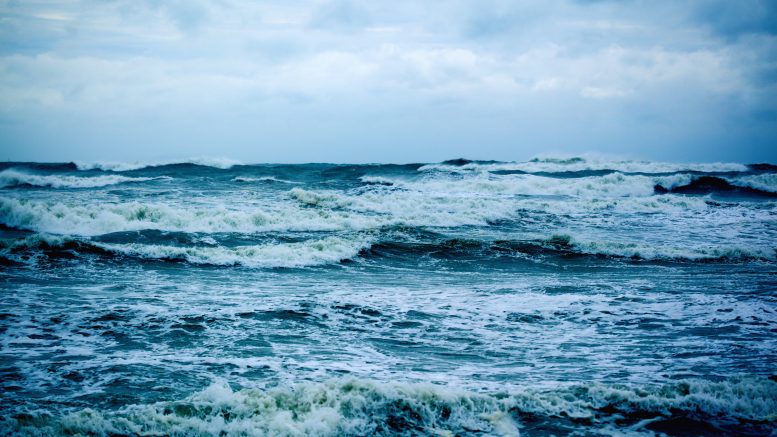 A storm on the Atlantic Ocean. Photograph by Sharon McCutcheon

As he neared the end of his 10-week solo trip across the Atlantic Ocean in a rowboat, with most of his 3,000-mile journey behind him, Owen Gray thought he might have to send out an SOS.

Gray, 56, of Reno, was the only American solo rower participating in the Talisker Whisky Atlantic Challenge, the world’s toughest rowing event. A fleet of 36 rowboats, some with as many as five rowers, embarked from the port of La Gomera in the Canary Islands on Dec. 12 and pointed their bows west toward the island of Antigua in the Caribbean Sea.

“We had gotten to about nine days or so (from Antigua) when we got hit by a big northerly storm system that pushed me and the two boats behind me pretty far south; I ended up further south than any other boat,” Gray said in an interview in Reno. “That’s when I had to have a conversation about whether we’d need to have a rescue done… They would have come with a safety boat and I’d get towed.”

Then came an unexpected break in the weather, giving him a chance to get back on course. That’s when the bow line for his para anchor broke. The anchor is a water-deployed parachute that keeps his boat from drifting when he’s not rowing. Gray improvised. He rowed for three hours and then attached the para anchor to a cleat on the side of the vessel as a brake against drifting while he — and his last remaining and overheating auto tiller – got some rest.

He followed that procedure all the way to Antigua. He arrived in the harbor at 4 a.m. Feb. 21, 70 days, 19 hours and 29 minutes after leaving the Canary Islands. “It was definitely interesting emotionally dealing with getting that far south,” Gray said.

So with the wind, waves and equipment problems against him, what kept him going?

Gray so far has raised $196,000 for the Okizu Foundation, a 40-year-old organization that supports families impacted by childhood cancer. Gray is a former volunteer at the University of California, San Francisco pediatric bone marrow transplant unit. He also served as a counselor for two summers at Okizu’s summer camp in the Sierra Nevada, which was destroyed in the Berry Creek Fire in 2020. The money he raised will help Okizu continue to offer its free programs. Donations to Okizu may be made online.

“When it got emotionally dark, dealing with mechanical problems and thinking I might have to be rescued, it came down to the fact that I was representing Okizu out there. I was thinking, like, what would I tell a kid who has cancer at camp about why I didn’t finish the race. If I told them I couldn’t finish, is it truly a case where I can’t finish, or is it a case that I chose not to finish?”

For 70 days, he was a speck on an endless ocean. The other rowboats in the competition dropped out of sight soon after the start of the race. At the halfway point of his trek, the competition’s support yacht cruised by to take photos and video. In addition, Gray saw a sailboat, some distant cargo vessels and was once visited by a whale swimming in the company of a half dozen dolphins.

“The whale hung out for about 20 minutes, swimming next to the boat, under the boat, just kind of checking us out,” he said.

At one point his boat nearly capsized. “Swells are coming at you from more than one direction,” Gray explained. “I went over one swell and got hit with another swell from the side. They call it a ‘knockdown’ when the boat rolls over 180 degrees. The right side of my body was in the water and eventually it self-righted.” That’s a feature of his boat, which is able to right itself even if it flips upside down – as long as the cabin doors are shut.

When Gray talks about his experience, he says “we” or “us,” not “I” in reference to his boat, the Jack Keane, named after his grandfather. “I was the only one physically on the boat, but I wasn’t the only one there,” he said. “It was a solo row, but it wasn’t a solo effort.”

Using a satellite phone, he frequently checked in with the contest’s safety team and had limited Internet access. “I had emails and cards stuffed into my food bag from friends and supporters,” Gray said. Thousands of people followed his progress on his website and his Facebook page. “All that love was felt every day. I never felt I was truly alone out there.”

Each day, Gray’s wife, Marianne, provided wind and weather forecasts and shared his experiences via satellite phone. Marianne was “a much bigger support system” than he or she anticipated, he said.

His wife was his North Star

“Being out there by yourself, you kind of lose perspective. It’s like if you’re looking at something or thinking about something, you don’t have anyone to bounce it off of… I ended up calling her daily asking her what she thought.”

Marianne said once Owen began the trek she thought she would mostly be a spectator, watching his progress on an online GPS tracker along with his other supporters. “At the start, I didn’t appreciate how much of a role I would play, plotting things and really being part of the team and not a bystander,” Marianne said. She studied weather forecasts and wind charts like a meteorologist.

“It was helpful for me, because I really knew what was going on,” she said. “To not have that kind of insight into it, and not just hearing about the highlights or the lowlights second hand, really helped me be a part of it… The last two weeks were rough, he was continually getting pushed south. I had to be more exact with the wind and weather reports.:”

When her husband arrived in Nelson’s English Harbour in Antigua, Marianne was there to greet him.

At the finish line

“It’s good to have him back,” she said. “Standing on the dock at 4 a.m. and seeing him come in was pretty exciting. He looked pretty gaunt when he first got off the boat. After the haircut I could really see the weight loss in his face. He lost about 30 pounds. His body structure also changed. He’s very strong in his core and quads, but his calves and everything else kind of atrophied.”

After Gray arrived in Nelson’s English Harbour, he was required to go through the contest’s end-of-race protocols to make sure all the rules were observed. Then came a shower and a long-overdue shave and a haircut.

Owen wanted to get back to Reno once the competition ended. “Sitting on a beach in Antigua wasn’t something he wanted to do at that moment; he had enough ocean for awhile… It was an amazing journey and now we have to sit down and figure out what’s next.”

His Atlantic row has been the experience of a lifetime.

“I don’t know about topping it,” Gray said. “This summer I’m looking at the Rock Tahoe Half Marathon and there’s a Half Iron Man competition in Santa Cruz in the fall. There’s a couple Pacific (rowing) races, but now neither one is allowing solo rowers, so who knows?’

Be the first to comment on "Alone on the Atlantic for 70 days, man fought wind and waves for kids with cancer"